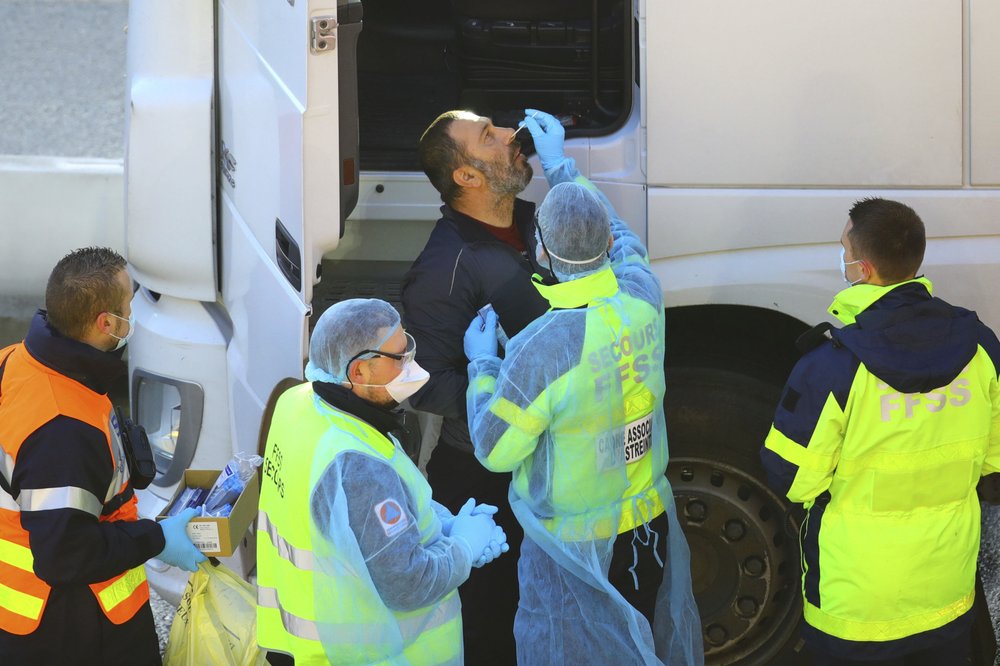 A man conducts a COVID-19 test on a driver at the Port of Dover in Kent, England, Thursday Dec. 24, 2020 where thousands wait to resume their journey across The Channel after the borders with France reopened. (Photo: AP)

Truckers and travelers stuck in a days-long gridlock at the English port of Dover started heading to France on Thursday after the country partially reopened its borders with Britain following international concern over a rapidly spreading new coronavirus variant.

However, thousands of stranded truck drivers still awaited their turns to cross the English Channel, held up by the slow delivery of coronavirus tests. Trucks inched slowly forward to the ferries and trains that link Britain with France, as authorities checked that drivers could show the negative virus tests now required to cross.

Officials warned the backlog could take days to clear, and many truckers will likely spend Christmas waiting in their cabs.

Dozens of countries swiftly halted travel from the U.K. last weekend after British Prime Minister Boris Johnson said London and other areas of southern England had to close all non-essential stores and call off holiday plans to curb a new, much more contagious version of the virus.

But infection rates continue to soar, particularly in London and surrounding areas. The capital now has the highest rate of people testing positive in the country, according to the latest figures. The Office for National Statistics estimated that 2.1% of the people in London had COVID-19 in mid-December, compared to around 1.18%, or one in 85 people, for the wider population in England. The figures do not include people in hospitals or care homes.

The majority of new positive cases confirmed in London were believed to be the coronavirus variant, the statistics office said. For England as a whole, it estimated that about half of all new cases could be the new variant.

Officials say the new variant is dangerous because it is more transmissible, though they stress there is no evidence it makes people more ill. Christmas gatherings and festive shopping were cancelled for millions at the last minute in a bid to control the spread of the virus and ensure hospitals, many of which are nearing capacity, are not overwhelmed.

In Dover, two dozen French firefighters and British military were working with health officials to test thousands of truckers, who must return a negative COVID-19 test to make the crossing.

Transport Secretary Grant Shapps said on Twitter that of the 2,367 virus tests administered at the port as of Thursday afternoon, just three turned out positive.

The operators of the Channel Tunnel, also known as the Eurotunnel or “Chunnel,” told The Associated Press that the backlog is slowly clearing and around 1,200 trucks so far passed Thursday through the underwater railway passage that runs from England to France.

But some 5,000 drivers remained stranded at the Dover ferry crossing, and a Dover port spokeswoman said just about 700 trucks have departed.

British and French authorities have agreed to keep the border between the countries open throughout Christmas to help truck drivers and travelers get home.

“Normally, we close on the 25th, but now, given the situation, the port will remain open,” said Jean-Marc Puissesseau, president of the French ports of Calais and Boulogne-sur-Mer. Extra staff members agreed to work the holiday,

France’s temporary shutdown of the border raised the most concerns because France is a major conduit for trade and travel between Britain and the continent. The U.K. relies heavily on cross-Channel commercial links to the continent for food at this time of year, especially fresh fruit and vegetables.

The announcement of the coronavirus variant came as Europe has been walloped by soaring new virus infections and deaths. Europe as a whole has recorded over 500,000 virus-related deaths, according to a tally by Johns Hopkins University that experts agree is probably an undercount due to missed cases and other factors.

In France, officials defended the country’s handling of the border after the EU’s transport commissioner issued unusually strong criticism.

Commissioner Adina Valean, of Romania, tweeted: “I deplore that France went against our recommendations and brought us back to the situation we were in in March when the supply chains were interrupted.”

France’s European affairs minister, Clement Beaune, tweeted back that France had “exactly followed the EU recommendation” and is now “more open than other European countries” to arrivals from Britain.