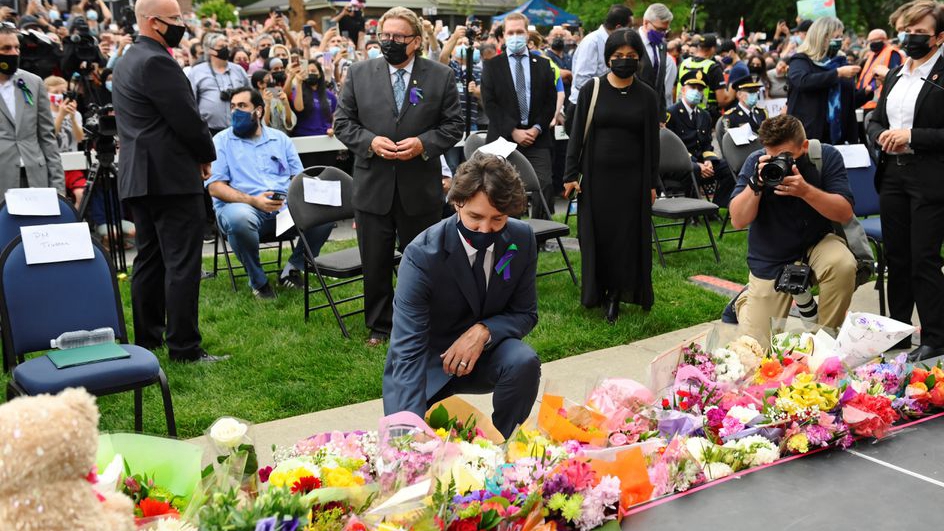 Canadian Prime Minister Justin Trudeau lays flowers at a vigil outside the London Muslim Mosque organized after four members of a Canadian Muslim family were killed in what police described as a hate-motivated attack in London, Ontario, Canada, June 8, 2021. (Photo: Reuters)

Canadian Prime Minister Justin Trudeau joined several thousand mourners in a vigil Tuesday evening to remember three generations of a Canadian Muslim family killed in what police said was a premeditated hate crime, as a grieving community stood united in the midst of the crisis.

"This is our city," Bilal Rahhal, chair of the London Muslim Mosque, told the crowd. "Never allow anyone to make you think otherwise because of the color of your skin, your faith, or where you were born. This is our city and we're not going anywhere."

On Sunday, four members of the family were killed as they were out on an evening walk near their home in London, Ontario, when police say a man rammed them with his pick-up truck, targeting them because of their religion.

Nathaniel Veltman, 20, has been charged with driving a pickup truck onto a curb and hitting the family in London, a city of over 400,000 people located 200 kilometers (124.27 miles) southwest of Toronto.

He was arrested on Sunday just a few hundred meters from the London Muslim Mosque, which the Afzaal family attended and where Tuesday's vigil was held.

Addressing the mourners, Trudeau said his government would take action, after placing flowers on the steps of the mosque, without giving details.

The attack has caused a nationwide outpouring of grief, with similar vigils taking place in Toronto, Vancouver and other cities across Canada.

The #OurLondonFamily hashtag had almost 10,000 tweets posted as of Tuesday evening, and many on social media changed their avatars to an image posted by the London Muslim Mosque of four white outlines of the victims on a purple background with a green ribbon.