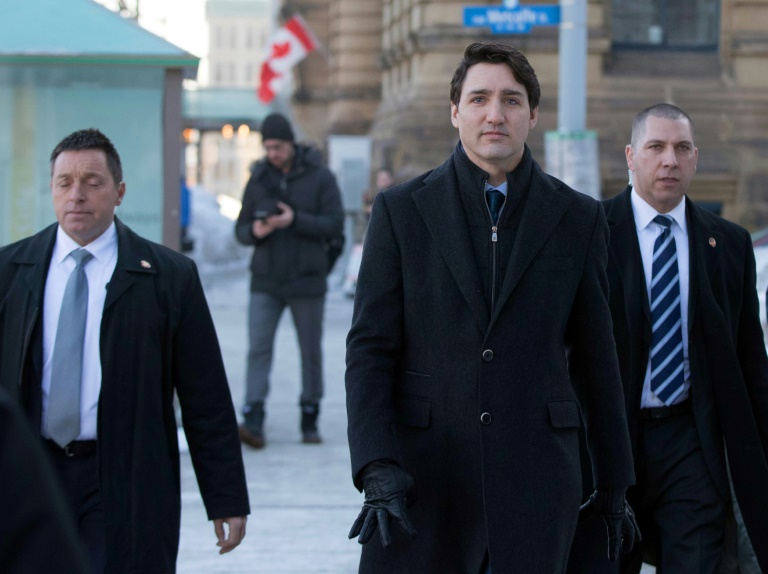 Canadian Prime Minister Justin Trudeau's credentials as a progressive leader have taken a hit since the resignations of his attorney general and budget minister, both women (Photo: AFP)

The office of Canadian Prime Minister Justin Trudeau, whose image has taken a hit in recent weeks over a growing corruption scandal, denied Saturday that he acted in a hostile way toward a female lawmaker in his party.

Celina Caesar-Chavannes, a Liberal lawmaker from the Toronto area, said in an interview with The Globe and Mail that she was targeted by Trudeau's wrath, when she said she would not seek re-election in October.

"He was yelling. He was yelling that I didn't appreciate him, that he'd given me so much," said Caesar-Chavannes. While he later apologized, she said Trudeau was hostile on other occasions.

Trudeau's office denied the characterization, saying in a statement: "The prime minister has deep respect for Celina Caesar-Chavannes. Discussions they had in February were direct but not hostile."

It was yet more bad press undermining Trudeau's credentials as a progressive leader following the resignations of his attorney general and budget minister - both of them women, one indigenous.

Caesar-Chavannes said Trudeau asked her to delay announcing her decision after Attorney General Jody Wilson-Raybould had just stepped down, plunging the government into crisis over suspected interference in a legal process.

That was followed by the resignation of Budget Minister Jane Philpott.

The prime minister, who touts his credentials as a feminist and defender of indigenous rights, would like to avoid the political image of someone who presided over the departure of two women of color, added Caesar-Chavannes, who is black.

Wilson-Raybould, who is of indigenous descent, said after she resigned that she had faced undue pressure from Trudeau and his aides seeking that she try to avoid a trial of engineering giant SNC-Lavalin.

SNC-Lavalin was charged in 2015 with corruption for allegedly bribing officials in Libya between 2001 and 2011 to secure government contracts during the rule of former strongman Moamer Kadhafi.

The Montreal-based firm openly lobbied the government for an out-of-court settlement that would result in a fine and agreeing to compliance measures, saying a conviction would lead to job cuts.

Wilson-Raybould refused to ask prosecutors to settle, and the trial is set to proceed.

On Saturday, Trudeau acknowledged mistakes had been made but denied any laws were broken.

"There was a disagreement about the best way to move forward and there were certainly an erosion of trust in my office that I absolutely need to learn from and deal from and do better in the future and that I take very, very seriously," he said.

"But throughout, we remain true to our values and focused on the things that really matter."