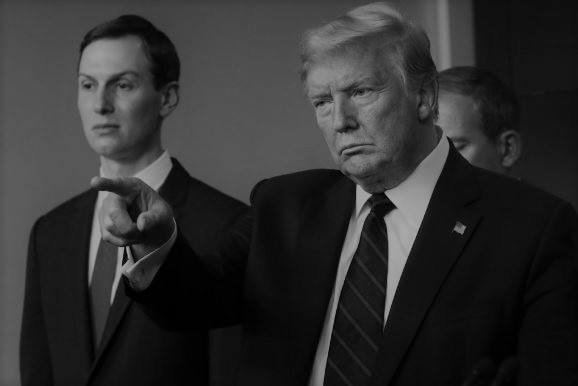 President Donald Trump points to a reporter to ask a question as he speaks about the coronavirus in the James Brady Press Briefing Room of the White House, Thursday, April 2, 2020, in Washington, as White House adviser Jared Kushner listens. (Photo: AP)

The Trump administration abruptly changed its description of the Strategic National Stockpile, the federal government’s repository of life-saving medicines and supplies, to conform with President Donald Trump’s insistence that it is only a short-term backup for states, not a commitment to ensure supplies get quickly to those who need them most during an emergency.

The change, reflected on government websites on Friday, came a day after Jared Kushner, Trump’s son-in-law and White House senior adviser who has taken a larger role in the coronavirus response, offered a new argument about the stockpile.

Until Friday, the federal Health and Human Services website had reflected a markedly different approach to the stockpile. The “Strategic National Stockpile is the nation’s largest supply of life-saving pharmaceuticals and medical supplies for use in a public health emergency severe enough to cause local supplies to run out,” the website used to say, according to an archived search.

“When state, local, tribal, and territorial responders request federal assistance to support their response efforts, the stockpile ensures that the right medicines and supplies get to those who need them most during an emergency,” the website had said.

But, according to data, the description changed Friday morning: “The Strategic National Stockpile’s role is to supplement state and local supplies during public health emergencies. Many states have products stockpiled, as well. The supplies, medicines, and devices for life-saving care contained in the stockpile can be used as a short-term stopgap buffer when the immediate supply of adequate amounts of these materials may not be immediately available.”

Officials at the agency said the change had been in the works for weeks, downplaying any connection to Kushner’s comments. Kushner made his claim during his first appearance at the daily White House coronavirus task force briefing, a moment meant to highlight his growing role in managing the federal response to the pandemic, particularly in delivering vital supplies.

Trump has long insisted that the onus for battling the crisis lies with the states and that Washington is meant to play more of a supporting role. He has resisted calls to issue a national stay-at-home order and said that he didn’t want to overly use the Defense Production Act, which allows him to mobilize private companies for the effort, because he believed the states should take the lead in obtaining supplies.