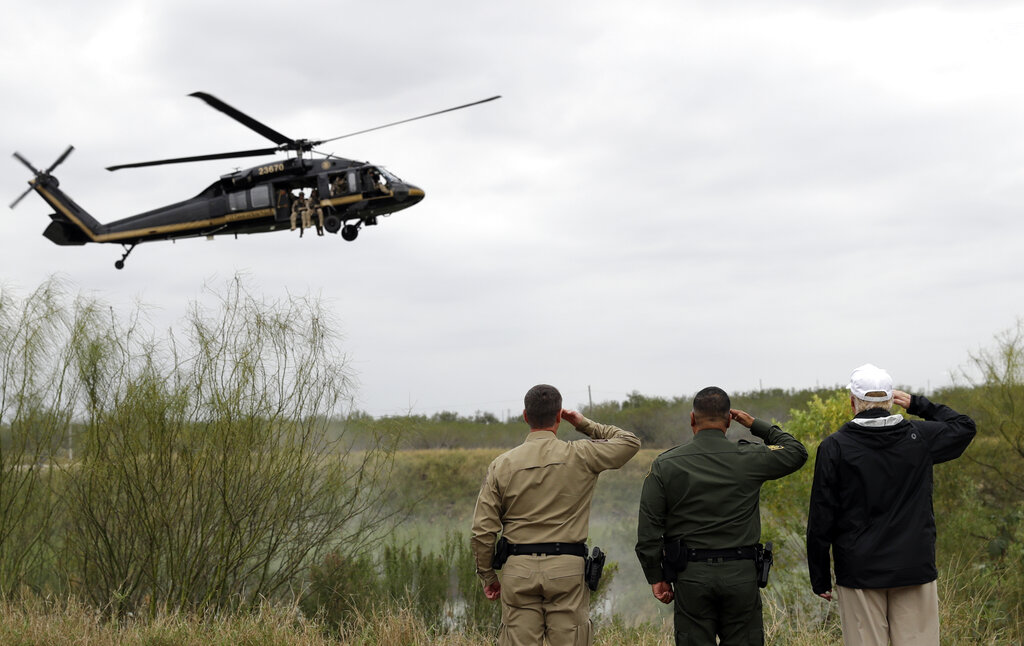 President Donald Trump salutes as a U.S. customs and Border Protection helicopter passes as he tours the U.S. border with Mexico at the Rio Grande on the southern border, Thursday, Jan. 10, 2019, in McAllen, Texas. (Photo: AP)

The Trump administration is considering using billions in unspent disaster relief funds earmarked for areas including hurricane-pounded Puerto Rico and Texas and more than a dozen other states to pay for President Donald Trump's border wall as he weighs signing a national emergency declaration to get it built without Congress.

The White House has directed the Army Corps of Engineers to comb through its budget, including $13.9 billion in emergency funds that Congress earmarked last year, to see what money could be diverted to the wall as part of a declaration. That's according to a congressional aide and administration official familiar with the matter who spoke on condition of anonymity because they were not authorized to speak publicly.

It is the latest sign that the administration is laying the groundwork for a possible emergency order as negotiations between Trump and congressional Democrats to reopen the partially shuttered government have ground to a halt. Trump is demanding billions for his wall that Democrats won't give him. In the meantime, hundreds of thousands of federal workers are set to miss paychecks Friday.

Trump on Thursday gave his strongest public indication yet that he is leaning toward an emergency declaration as he traveled to the Texas border to continue to press his case for the wall.

Trump told reporters as he left the White House that he was still holding out hope for a deal, but that if it "doesn't work out, probably I will do it. I would almost say definitely."

Nearly $14 billion in emergency disaster relief funds have been allocated but not yet obligated through contracts for a variety of projects in states including California, Florida and Texas and in the U.S. territory of Puerto Rico that have been ravaged by recent hurricanes, wildfires and other natural disasters, according to the aide familiar with the matter.

A second official with knowledge of the proposal said it would fund construction of about 315 miles (500 kilometers) of border barrier. Right now, barriers blanket about one-third of the 1,954-mile (3,145-kilometer) border with Mexico.

Defense Department officials had already been combing data on more than $10 billion in military construction projects to determine how much of it would be available for emergency spending this year.

Officials have estimated that roughly one-quarter to one-third of the money, or $2.5 billion to $3 billion, could be available — less than the $5.7 billion Trump is seeking. The majority has also already been obligated — meaning that it has been spent or a contract has been signed and there would be penalties for cancellation.

Regardless of where the money is found, an emergency declaration would draw immediate legal challenge from Democrats, who have accused Trump of trying to manufacture a crisis at the southern border to justify his wall. Critics have said the move would be an unconstitutional abuse of emergency powers. Trump said Thursday that his lawyers have told him he has the "absolute right."

Republican and Democratic lawmakers raised immediate concerns over shifting funds that have already been approved by Congress for projects in states across the nation.

Rep. Mike Simpson of Idaho, a top Republican on the Appropriations Committee, said he has been hearing from lawmakers in recent days concerned that Army Corps projects in their states could be canceled or postponed.

"If they drag the money out of here," Simpson said in an interview late Thursday, "a lot of members will have problem with it."

Rep. Peter DeFazio, D-Ore., the incoming chairman of the Transportation and Infrastructure Committee, said in an interview that rebuilding the disaster areas is "a way higher priority benefiting the American people than a wasteful wall."

He said the Army Corps works on dams, levees and other projects across the nation and has an enormous backlog of unfunded needs. "It would be an incredible disservice to the American people and the economy" to divert the money to the border wall, he said.

And Rep. Nydia Velazquez, D-N.Y., said in a statement that it would be "beyond appalling for the president to take money from places like Puerto Rico that have suffered enormous catastrophes, costing thousands of American citizens' lives, in order to pay for Donald Trump's foolish, offensive and hateful wall."

"Siphoning funding from real disasters to pay for a crisis manufactured by the president is wholly unacceptable and the American people won't fall for it," she said.