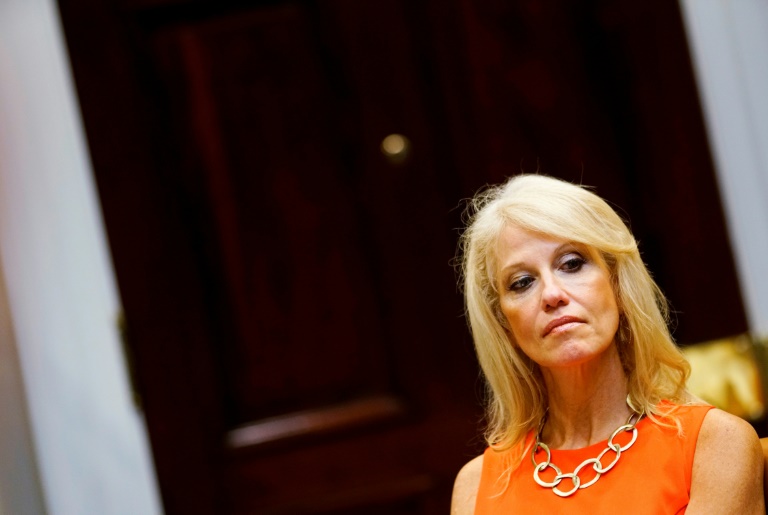 "I feel very emphathetic, frankly, towards victims of sexual assault and sexual harassment and rape," said Conway, before pausing to clear her throat (Photo: AFP)

Kellyanne Conway, a senior adviser to US President Donald Trump and one of the most public faces of his administration, revealed on Sunday that she has been a victim of sexual assault.

Conway made the disclosure to CNN's Jake Tapper on his State of the Union news show, while defending Trump's embattled Supreme Court nominee Brett Kavanaugh.

"I feel very empathetic, frankly, towards victims of sexual assault and sexual harassment and rape," she said, before pausing to clear her throat.

"I'm a victim of sexual assault. I don't expect Judge Kavanaugh, or Jake Tapper, or Jeff Flake, or anybody, to be held responsible for that. You have to be responsible for your own conduct," she added, visibly emotional.

Tapper, who appeared to have been caught off-guard, offered his sympathies.

"This is the first time I've ever heard you talk about something personal like that, and I'm sorry," he said.

Tapper then noted that Conway continues to work for President Trump, though numerous sexual misconduct allegations have been lodged against him.

But Conway, who had earlier in the interview argued that sexual assault was being used as a pretext to pursue political agendas, returned to the same theme.

"Don't always bring Trump into everything that happens in this universe. That's mistake number one."

Trump on Friday ordered a new FBI investigation into sexual assault allegations against his Supreme Court pick, as the Senate delayed a vote on Brett Kavanaugh's nomination to make way for the probe.

The decision came a day after a dramatic hearing watched by more than 20 million people at which university professor Christine Blasey Ford accused the judge of pinning her down and assaulting her in the 1980s.

At least three women have now accused the 53-year-old conservative judge of sexual misconduct while drunk, both as a high school student and later at Yale University.

Republicans see Kavanaugh as pivotal to their gaining control of the nine-member Supreme Court bench.

Trump nominated him to replace Anthony Kennedy, who for years was a swing vote between four conservative and four liberal justices.