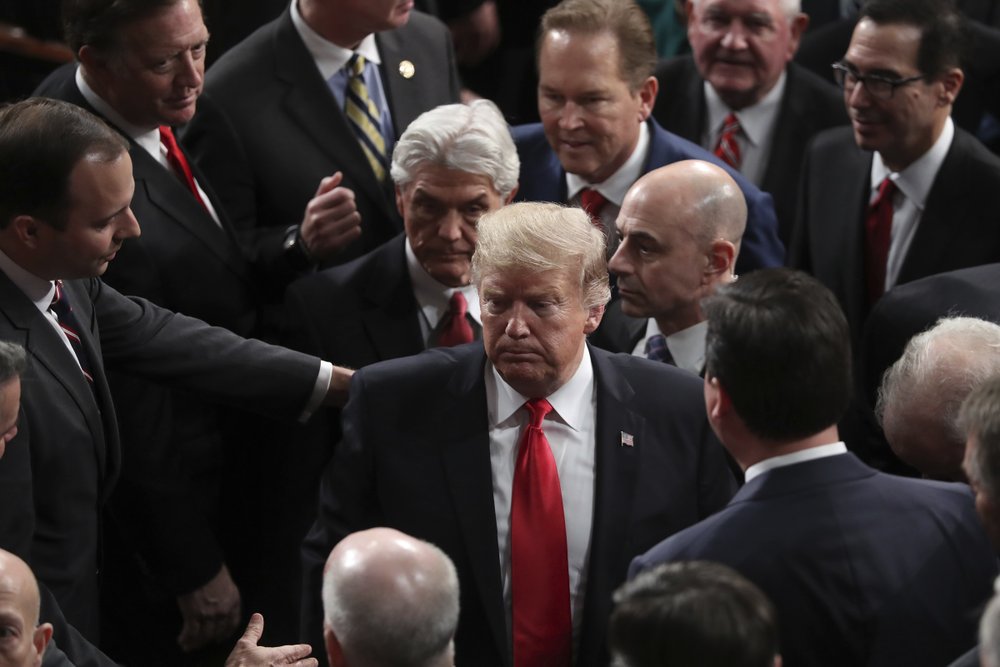 US President Donald Trump departs after the State of the Union address to a joint session of Congress on Capitol Hill in Washington, Tuesday, Feb. 5, 2019. (Photo: AP)

US President Donald Trump is holding his first campaign rally of the year next week in El Paso, Texas, a city he’s cited numerous times — including in his State of the Union address — in arguing for the wall he wants built along the US-Mexico border.

The rally on Monday will be four days before a Feb. 15 deadline for a congressional committee to come up with a compromise plan to fund large portions of the federal government to avoid another partial government shutdown.

Trump insists that money designated for wall construction be part of any deal. Democrats oppose a wall but have offered to fund technology and other border security measures. A stalemate over the issue led to a record 35-day shutdown that ended Jan. 25.

“The border city of El Paso, Texas, used to have extremely high rates of violent crime, one of the highest in the entire country and considered one of our nation’s most dangerous cities,” Trump said in Tuesday night’s address. “Now, immediately upon its building, with a powerful barrier in place, El Paso is one of the safest cities in our country.

“Simply put,” he said, “walls work, and walls save lives.”

Few people dispute that fences contributed to a sharp drop in border crossings in cities such as San Diego and El Paso, but Texas officials also cite other factors.

Fernando Garcia, executive director of the Border Network for Human Rights, said Trump “openly distorted the facts and the reality of our border region to justify the unjustifiable: his absurd obsession of a Border Wall.”

“El Paso is safe due to its people, the good community relations with law enforcement, and the trust of all communities in our local institutions,” Garcia said in a statement on Tuesday. “El Pasoans should be offended by the way the President used our community to advance his racist and xenophobic agenda.”

Rep. Veronica Escobar, D-Texas, tweeted Tuesday that “El Paso has been one of the safest cities in the nation long before the wall was built in 2008. #WallsDontWork.”

The White House offered no immediate response to criticism of the president’s comments about El Paso.

Trump plans to rally supporters on Monday night at the county coliseum there. His campaign manager, Brad Parscale, tweeted that the rally will be held “less than 1000 feet from the successful border fence that keeps El Paso safe!”

El Paso has never been considered one of the nation’s most dangerous cities, and its trends in violent crime mirror national swings before and after border barrier construction from 2006 to 2008, FBI data shows.

House Speaker Nancy Pelosi, D-Calif., on Wednesday, meanwhile, offered an upbeat assessment of the congressional committee’s talks. She said that, if left alone, the negotiators “can have an agreement on time” by an informal deadline this Friday.

She said she’ll support whatever the bipartisan group can agree to.