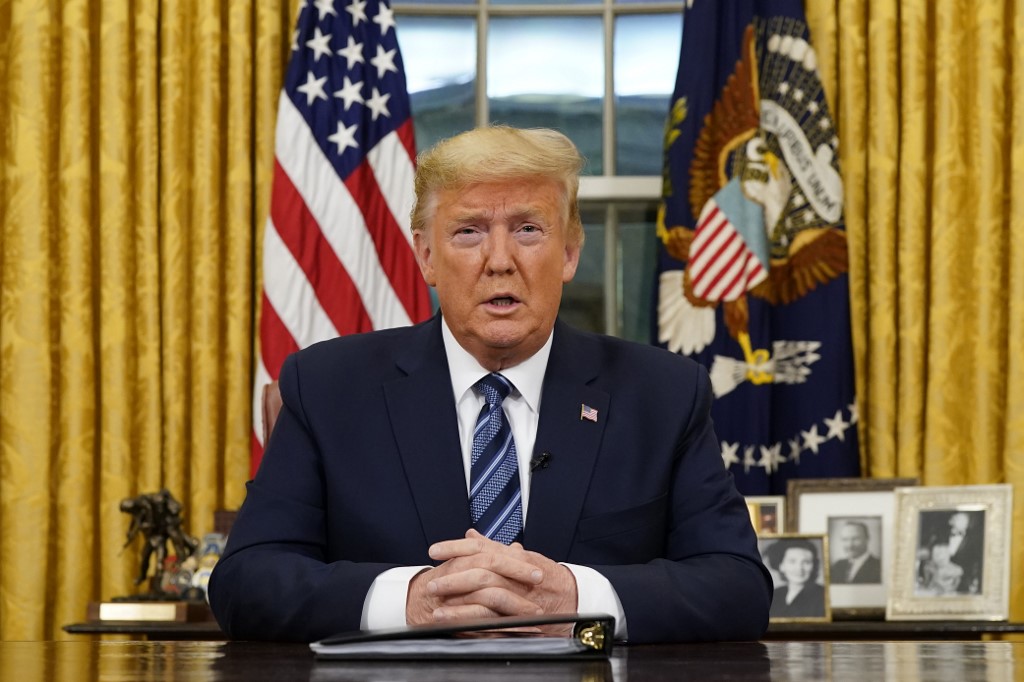 President Donald Trump on Thursday announced the gradual reopening of a US economy battered by the brutal side effects of an unprecedented effort to stop the spread of the coronavirus.

"Based on the latest data, our team of experts now agrees that we can begin the next front in our war," Trump told a news conference. "We're opening up our country."

His announcement came hours after new data showed job losses from the pandemic fallout in the world's number one economy had reached 22 million in the past month.

New York Federal Reserve Bank President John Williams warned it will probably take "a year or two," if not longer, for the US economy to recover its strength, as other figures showed dire damage to the home building market and manufacturing.

Trump had been campaigning for reelection in November largely on record low unemployment and a surge in US output.

So for the Republican, the battle to stop the coronavirus and lift social distancing and the paralysis of entire industries is also a race against the political clock.

However, the recommendations issued from the White House, in conjunction with medical advisors, were a far cry from Trump's previous hopes for a sudden, widespread end to social distancing measures.

Instead Trump described a cautious approach in which state governors, not the White House, will take the lead -- also a retreat for Trump who had insisted he could dictate the pace of reopening.

"Our approach will outline three phases in restoring our economic life," he said. "We are not opening all at once, but one careful step at a time, and some states, they will be able to open up sooner than others."

Some states, Trump said, are already free from the impact of the coronavirus and therefore can open "literally tomorrow."

If state governors "need to remain closed, we will allow them to do that. If they believe it is time to reopen, we will provide them the freedom and guidance to accomplish that task and very, very quickly, depending on what they want to do," he said.

- Phases but no timeline -

In a White House paper, presented to governors earlier in the day, Trump laid out the plan for getting people gradually back into public venues, but offered no timetable.

Depending on locations and levels of the virus there, people will be able eventually to attend public gatherings and conduct non-essential travel.

But even in the third phase, or what government scientist Deborah Birx called the "new normal," the White House is recommending continued, longterm extra hygiene measures.

There will also be a focus on stamping out any resurgence.

"What's key to this is early alerts and getting in there before they have a problem," another top government scientist, Anthony Fauci, said.

The caution at the heart of the plan represents a shift of direction for Trump, who from the start of the crisis has shown frustration with the extraordinary disruption and medical staff's advice to take extreme measures.

Fauci insisted that "the predominant and completely driving element" of the plan remains "safety."

"Light switch on and off is the exact opposite of what you see here," he said.

Experts say that the United States is now bending the curve of the coronavirus outbreak. However, while new cases are diminishing, deaths remain at a frightening rate.

Nearly 5,000 people died from the virus in the United States alone in the 24 hours to Thursday evening, according to the Johns Hopkins University tracker, a figure that seems to include "probable" deaths linked to COVID-19. They join the nearly 140,000 killed worldwide by the disease that has infected more than two million, according to an AFP tally.

Neither will the shaken economy be steadied overnight.

Another 5.2 million workers filed for unemployment benefits last week, according to the Labor Department's weekly report, slightly less than the previous week but still a shocking figure.

A separate report from the Commerce Department detailed the damage to the housing market, with homebuilding slowed sharply in March, while a Federal Reserve report showed plunging manufacturing activity in the Philadelphia region, echoing similar reports elsewhere.

Meanwhile, the Small Business Administration tasked with managing a $349 billion program to help businesses struggling due to the pandemic said it had exhausted its funds as lawmakers in Congress argued over a new round of stimulus measures.