U.S. President Donald Trump wondered on Tuesday why Anthony Fauci, a top infectious diseases expert and key member of the White House coronavirus task force, has enjoyed a higher approval rating among the public than he has on the handling of the coronavirus pandemic. 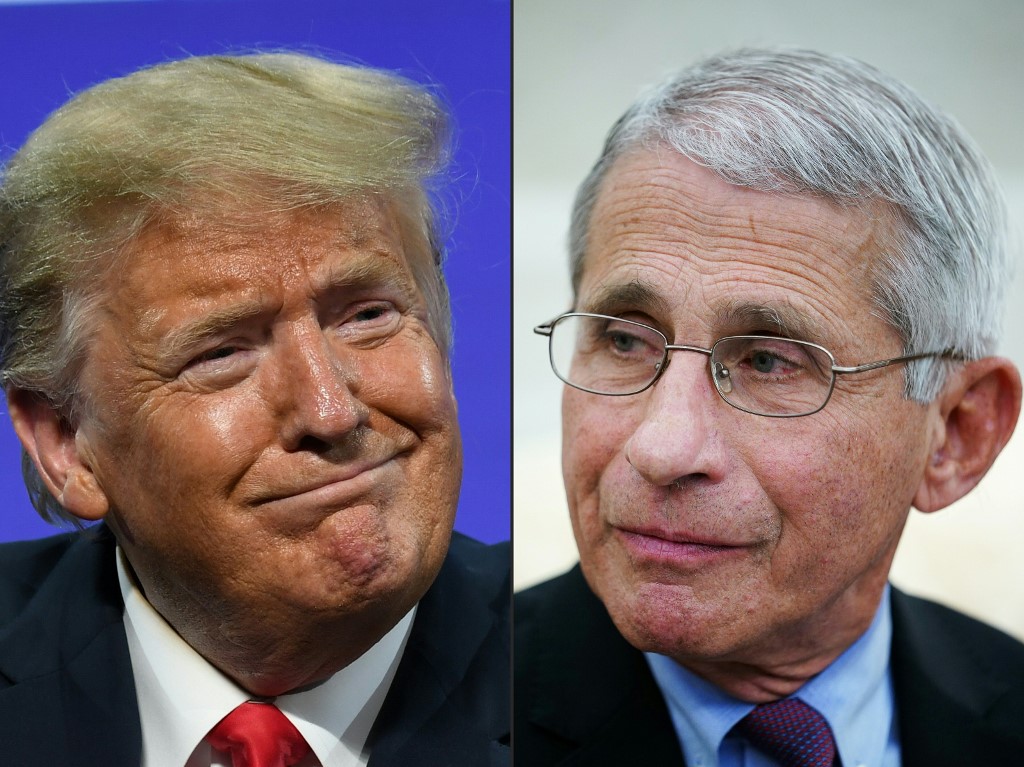 This combination of file pictures created on July 13, 2020, shows US President Donald Trump in Phoenix, Arizona, June 23, 2020 and Anthony Fauci , director of the National Institute of Allergy and Infectious Diseases in Washington, DC on April 29, 2020. (Photo: AFP)

"It's interesting: He's got a very good approval rating, and I like that. It's good. Because remember, he's working for this administration," the president continued. "We could have gotten other people. We could have gotten somebody else. It didn't have to be Dr. Fauci."

"They're highly thought of, but nobody likes me." he said. "It can only be my personality."

Polls have shown Fauci, a career health official who has served as director of the U.S. National Institute of Allergy and Infectious Diseases since 1984, to be among the most trusted voices in the country on the pandemic since it started months ago.

"Dr. Anthony Fauci has a good bedside manner with the public, but he has been wrong about everything I have interacted with him on," Navarro wrote in an op-ed published on July 14. "So when you ask me whether I listen to Dr. Fauci's advice, my answer is: only with skepticism and caution."

"I can't explain Peter Navarro; he's in a world by himself," Fauci responded. "So I don't even want to go there."

The White House later said Navarro's article "didn't go through normal White House clearance processes." Trump additionally said his trade adviser has "made a statement representing himself" and that "he shouldn't be doing that."

Despite the remarks, Trump has publicly acknowledged disagreements with Fauci, whom he has called "a little bit of an alarmist."

More than 4.3 million people in the United States have infected with the coronavirus, with nearly 150,000 deaths as of Tuesday, according to a dashboard maintained by Johns Hopkins University. The number of new deaths reached nearly 1,600 on Tuesday, the highest in two and a half month.

Fauci, 79, said last week that it is unlikely the coronavirus will ever be eradicated but the pandemic can still be taken under control.

"I don't really see us eradicating it," he said. "I think with a combination of good public health measures, a degree of global herd immunity and a good vaccine, which I do hope and feel cautiously optimistic that we will get, I think when we put all three of those together, we will get control of this, whether it's this year or next year. I'm not certain."

On Tuesday, The New York Times reported that Trump was also bothered by Fauci being invited to throw out the ceremonial first pitch at the Washington Nationals opener for the 2020 Major League Baseball season, which has been delayed since March.

Trump has not spoken about the story yet but again reiterated to reporters on Tuesday that he has "a very good relationship" with Fauci.

"I just will continue to do my job no matter what comes out," Fauci said on ABC's Good Morning America early on Tuesday. "Because I think it's very important. We are in the middle of a crisis with regard to an epidemic, a pandemic. This is what I do. This is what I've been trained for my entire professional life and I'll continue to do it."

He added, "I have not been misleading the American public under any circumstances."