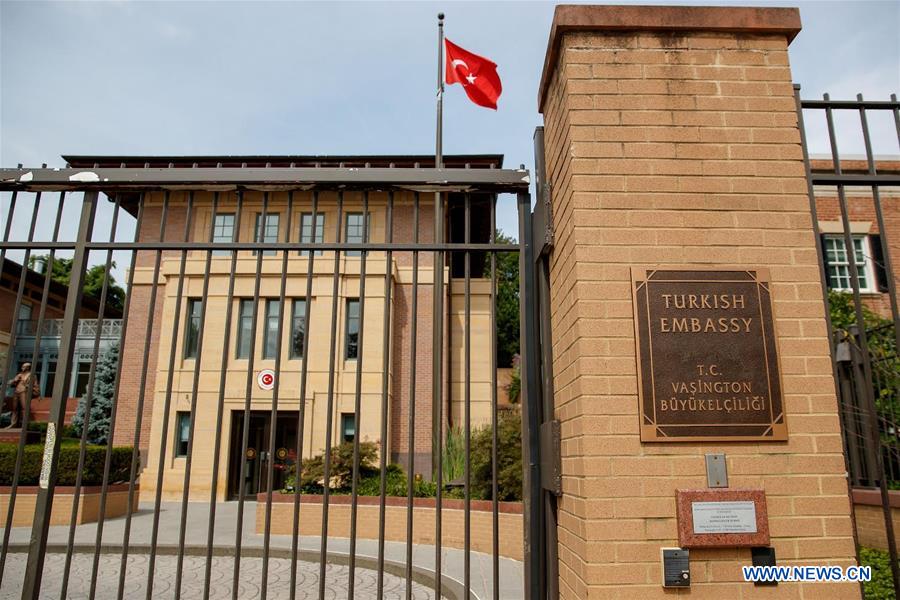 Photo taken on Aug. 10, 2018 shows Turkish Embassy in Washington D.C., the United States. U.S. President Donald Trump tweeted Friday that he has authorized to double the tariffs on steel and aluminum products from Turkey to 50 percent and 20 percent respectively. The White House has since confirmed the tweet. (Xinhua/Ting Shen)

WASHINGTON, Aug. 10 (Xinhua) -- U.S. President Donald Trump tweeted Friday that he has authorized to double the tariffs on steel and aluminum products from Turkey to 50 percent and 20 percent respectively. The White House has since confirmed the tweet.

Tensions ramped up between the two countries over the detention of an American pastor by Turkey. Trump tweeted Friday that the U.S.-Turkey ties "are not good at this time!".

The Turkish lira has fallen more than 10 percent since last week when the United States slapped sanctions on two Turkish ministers. Early Friday, the currency hit an all-time low of 6.30 against the U.S. dollar.

Turkey and the United States are currently experiencing rocky relations after the U.S. imposed sanctions last Wednesday on two Turkish ministers over the continued detention of U.S. pastor Andrew Brunson, who faces terrorism charges and up to 35 years in prison if found guilty.

Brunson was indicted for allegedly having links with the outlawed Kurdistan Workers' Party and Fethullah Gulen, an exiled Turkish preacher who has allegedly masterminded the failed coup attempt in 2016 to topple Erdogan.

A Turkish court has agreed to move Brunson from prison to house arrest over health concerns, but it still does not allow him to return to the United States.

As a result of U.S. sanctions, any property or interest in property of both Turkish ministers within U.S. jurisdiction is blocked, and U.S. persons are generally prohibited from engaging in transactions with them.

In response, the Turkish Foreign Ministry vowed to "retaliate" against U.S. "aggression" over the case of Brunson "without any delay," and called on Washington to reverse its decision.

Last Friday, Turkish Foreign Minister Mevlut Cavusoglu and his U.S. counterpart Mike Pompeo met in Singapore on the sidelines of the Association of Southeast Asian Nations foreign ministers' meeting. Ankara and Washington agreed to work together to resolve problems between them, Cavusoglu said after the meeting.

The two sides seemed to have failed to resolve the deadlock though bilateral talks in Washington earlier this week during the visit of a Turkish delegation headed by Deputy Foreign Minister Sedat Onal and made up of officials from Turkey's justice, finance and foreign ministries.

U.S. State Department spokesperson Heather Nauert said on Thursday that although the two sides "had wide-ranging meetings at the State Department and with other departments here in Washington," the U.S. side "would define progress as Pastor Brunson being brought home."

"The progress that we want to be made is to have Pastor Brunson return home," she added.

Turkish President Recep Tayyip Erdogan on Thursday also dismissed concerns over the tumbling lira and called on his nation to "have no worries."