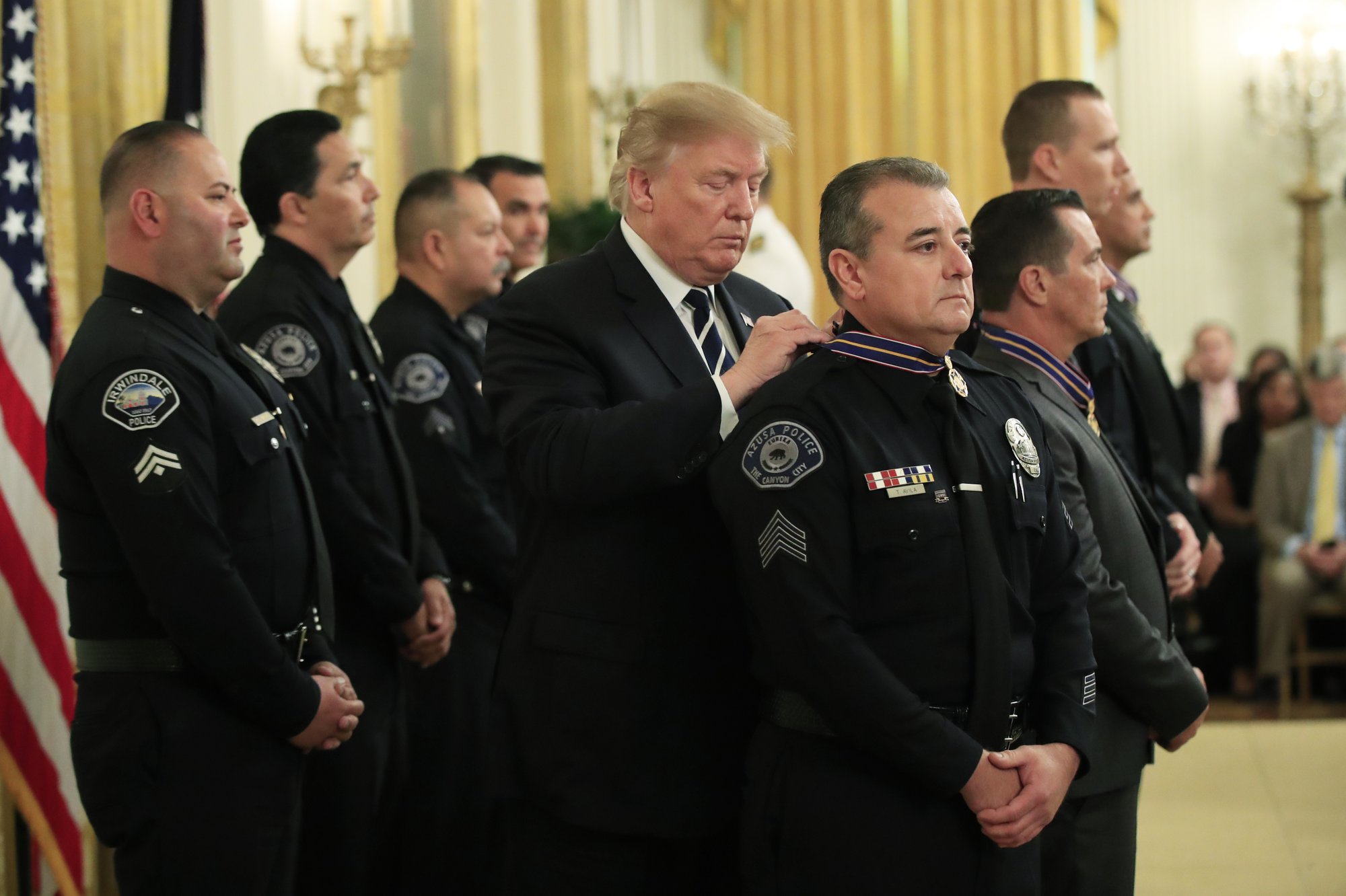 US President Donald Trump awards Sgt. Thomas Avila III of the Azusa (Calif.) Police Department the Public Safety Officer Medal of Valor during a ceremony in the East Room of the White House in Washington, Wednesday, May 22, 2019. (Photo: AP)

Fourteen public safety officers were awarded the Medal of Valor by US President Donald Trump on Wednesday, including eight who responded to a shooting at a southern California polling place.

“Every officer, firefighter and first responder who receives this award embodies the highest ideals of service and sacrifice, character and courage,” Trump said during a White House ceremony.

The medal is the nation’s highest honor for bravery by a public safety officer.

When they arrived at the polling place, a person was shooting from a house across the street from a park. An elderly woman had been killed and a man lay wounded on a sidewalk. Two vehicles had collided and a woman in one of the cars was critically injured. The shooter was eventually killed and the officers were credited for preventing other deaths and injuries.

The other recipients were:

—Ohio State University police officer Alan Horujko, who risked his life on Nov. 28, 2016, to save the lives of civilians. A driver had driven down a sidewalk and struck several pedestrians, and then got out of his car and began attacking people with a knife. Horujko killed the attacker after trying unsuccessfully to get him to disarm. Thirteen people were attacked and 11 were hospitalized, one in critical condition.

—Nicholas Cederberg, senior trooper with the Oregon State Police, who suffered life-threatening injuries while helping apprehend a man wanted for shooting his estranged wife eight times. The attacker rammed the patrol car and shot Cederberg in the right hip. As he lay on the ground, Cederberg was shot 12 more times. Five bullets were stopped by his armored vest, but seven penetrated his body. Cederberg underwent surgeries to repair a collapsed lung and two broken arms.

—Fire Capt. Dustin Moore and firefighter and paramedic Andrew Freisner of the fire department in Lenexa, Kansas, risked their lives to rescue a family from inside a burning apartment building on April 24, 2017. They climbed a ladder to the second floor, went inside and rescued an unconscious adult, two young children and the family dog.

Two awards also were given to the families of fallen officers:

—Sgt. Verdell Smith Sr. of the Memphis, Tennessee, police department was clearing an intersection of pedestrians on June 4, 2016, when he was struck by a vehicle driven by a suspect in a triple shooting.

—Officer Brent Thompson of the Dallas, Texas, Area Rapid Transit Police Department was killed on July 7, 2016, during a shootout with a man who had just killed three Dallas police officers and wounded three others with an assault rifle. Thompson’s actions created a distraction that allowed others to aid the wounded and gave cover to officers so they could force the attacker inside a building where he was killed by the Dallas Police SWAT team.