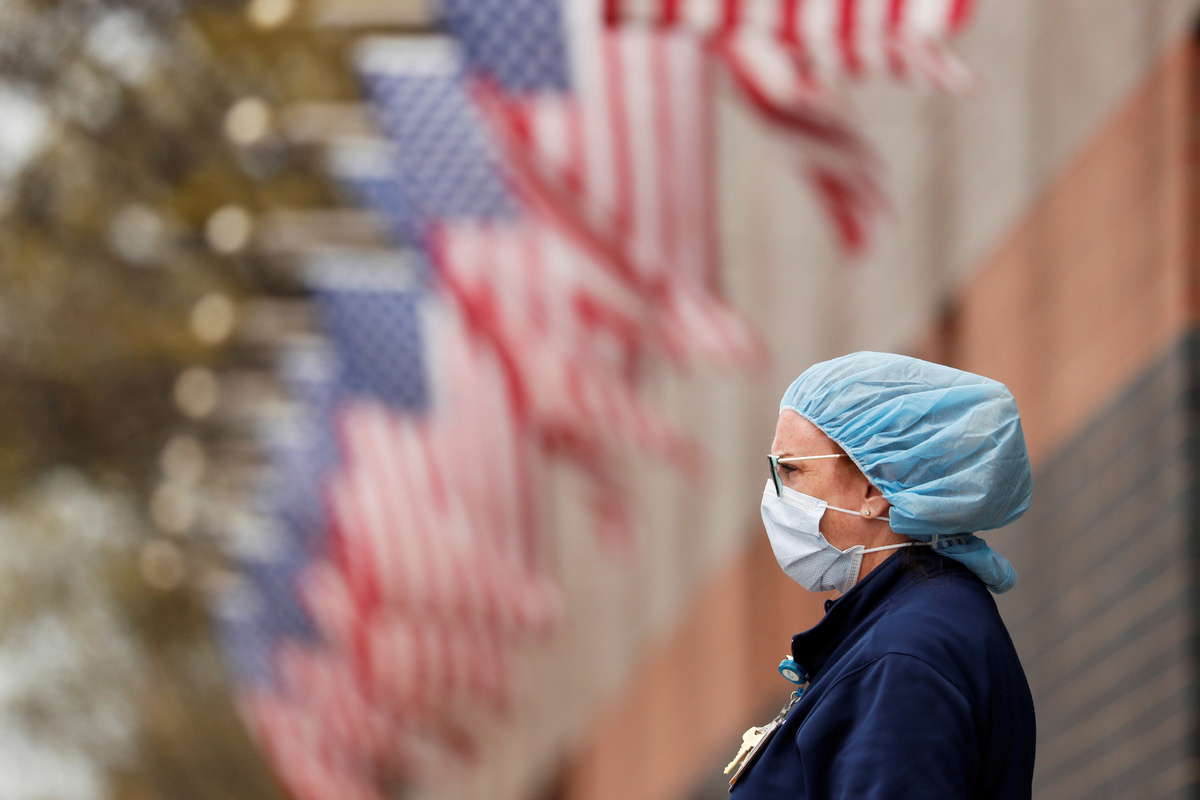 A nurse wearing personal protective equipment watches an ambulance driving away outside of Elmhurst Hospital during the ongoing outbreak of the coronavirus disease (COVID-19) in the Queens borough of New York, US, April 20, 2020. [Photo/Agencies]

US President Donald Trump on Thursday attacked Joe Biden for calling on governors to mandate the wearing of masks for the next three months, accusing the Democratic presidential candidate of politicizing an issue Trump himself has used for political gain.

Trump claimed Biden has been wrong about the pandemic at every turn, "ignoring the scientific evidence and putting left-wing politics before facts and evidence".He went on to falsely say that Biden was advocating for the president to use executive power to institute a nationwide mask mandate and that Biden was in favor of "locking all Americans in their basements for months on end".

"To Joe, I would say stop playing politics with the virus," Trump said at a White House news conference.

Biden did not call for an executive order, but did at an earlier campaign event call for the institution of "a mask mandate nationwide, starting immediately". Biden clarified, however, that it should be left up to the governors to make mask-wearing mandatory.

He said nothing about keeping people indoors, but has argued that economic reopenings in states have been rushed and done without proper guidance from the federal government to keep people safe.

Trump spent the early months of the pandemic refusing to wear a mask during public appearances, ridiculing reporters who wore them, and retweeting messages making fun of Biden for wearing a mask and implying that he looks weak. Trump first wore a mask in public about a month ago, during a visit to a military hospital, and has since expressed support for them at times.

On Thursday, he said it's patriotic for US citizens to wear masks, but added: "Maybe they're great, and maybe they're just good. Maybe they're not so good."

Biden, at his earlier event, said all US people should wear masks, citing health experts' predictions that it could save 40,000 lives from the virus over the next three months. The presumptive Democratic presidential candidate also responded to those who push back against such mandates.

"This is America. Be a patriot. Protect your fellow citizens. Step up, do the right thing," Biden said at the time.

The back-and-forth marked a new line of attack from Trump, who is trailing Biden significantly in most nationwide and swing-state surveys. Biden has made what he says is Trump's mishandling of the pandemic－which has now caused the deaths of 166,000 people in the country－a centerpiece of his attacks on the president.

Health experts are adamant about the need for people to wear masks and maintain social distance to defeat a pandemic that has already infected 20 million people and killed 750,000 worldwide.