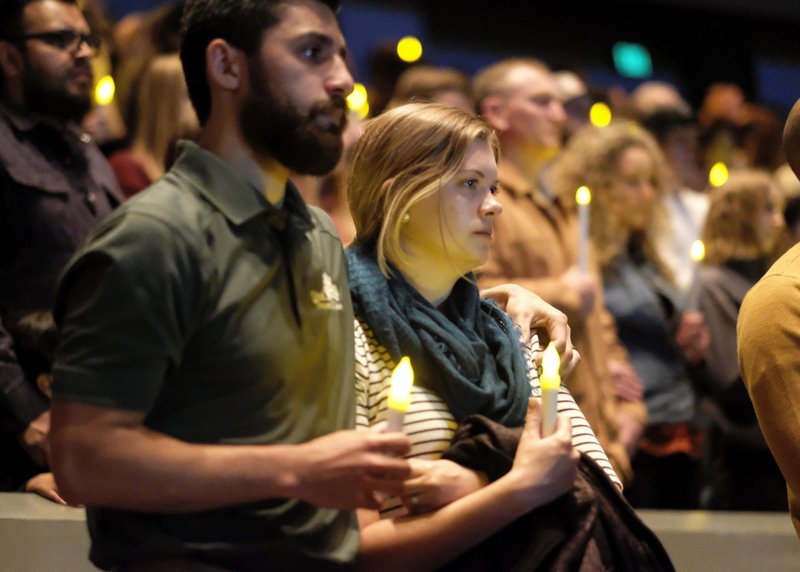 As investigators worked to figure out why an ex-Marine slaughtered 12 people at a country music bar, President Donald Trump on Friday blamed mental illness, describing the gunman as “a very sick puppy” who had “a lot of problems.”

Investigators have not commented on a motive for the rampage or whether mental illness played a role.

But neighbors reported hearing frequent loud fights between Ian David Long and his mother, one of them so extreme they called police in April, and authorities at the time worried that the 28-year-old Afghanistan war veteran might have post-traumatic stress disorder. However, a mental health specialist concluded there were no grounds to have him involuntarily committed for psychiatric evaluation.

On Wednesday night, the former machine gunner, dressed all in black with his hood pulled up, opened fire with a handgun at the Borderline Bar & Grill during college night, then apparently killed himself as scores of police officers closed in.

The dead included sheriff’s Sgt. Ron Helus, a 29-year veteran nearing retirement who responded to reports of shots fired and was gunned down as he entered the bar. He and other first responders “ran toward danger,” Sheriff Geoff Dean said at a vigil Thursday evening, calling Helus a hero.

“I don’t want prayers. I don’t want thoughts,” said his mother, Susan Schmidt-Orfanos. “I want those bastards in Congress — they need to pass gun control so no one else has a child that doesn’t come home.”

Dani Merrill, who escaped from the Borderline bar when the shooting began, had also attended the 2017 Las Vegas country music festival where a gunman in a high-rise hotel opened fire and killed 58 people. She was appalled that such bloodshed had come to her community.

“I’m super upset that it happened in our home, and I feel awful for the families that have to go through this,” Merrill said at the vigil.

At the White House, Trump touted his efforts to fund work on PTSD among veterans. He declined to engage on questions on whether the nation needs stricter gun control laws.

Julie Hanson, who lives next door to the ranch-style home that Long shared with his mother, described him as “odd” and “disrespectful” well before he left home a decade ago, got married and enlisted in the Marines. She could often hear him yelling and cursing, but several months ago unusually loud banging and shouting prompted her husband to call authorities.

“I was concerned because I knew he had been in the military,” Tom Hanson said.

About 18 months ago, Don and Effie MacLeod heard “an awful argument” and what he believes was a gunshot from the Longs’ property. Don MacLeod said he did not call police but avoided speaking with Ian Long.

“I told my wife, ‘Just be polite to him. If he talks, just acknowledge him, don’t go into conversation with him,’” Don MacLeod said.

Thousand Oaks is a city of about 130,000 people about 40 miles (64 kilometers) from Los Angeles. It is annually listed as one of the safest cities in America.

“Hope has sustained communities, very much like Thousand Oaks, through the exact same triages of mass shootings,” said Andy Fox, the city’s outgoing mayor. “Tonight Thousand Oaks takes its place with those cities, who in order to move forward will rely on hope. ... We are Thousand Oaks strong.”

It was the nation’s deadliest such attack since 17 students and teachers were killed at a Parkland, Florida, high school nine months ago. It also came less than two weeks after a gunman massacred 11 people at a synagogue in Pittsburgh.

Democratic Gov.-elect Gavin Newsom, in his first public appearance since winning office on Tuesday, lamented the violence that has returned to California.