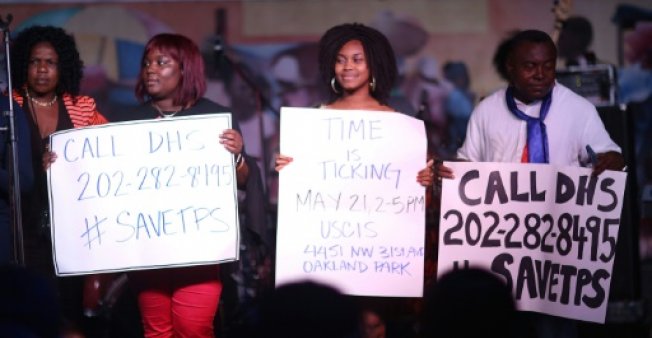 Women in Miami's Little Haiti neighborhood at a May rally to press for the extension of "temporary protected status" for Haitians who came to the United States after the 2010 earthquake disaster (Photo: Paul Handley / AFP) In this May 22, 2017, file photo, Pierrot Mervilier, center rear, hugs a girl that did not wish to be identified, living in the U.S. with Temporary Protected Status (TPS) after she and her family spoke to members of the media in Miami. The Trump administration said Nov. 20 it is ending a temporary residency permit program that has allowed almost 60,000 citizens from Haiti to live and work in the United States since a 2010 powerful earthquake shook the Caribbean nation. The Homeland Security Department said conditions in Haiti have improved significantly, so the benefit will be extended one last time — until July 2019 — to give Haitians time to prepare to return home. (Photo: AP / Wilfredo Lee)

Washington - President Donald Trump on Tuesday faced a backlash over his tough immigration policies after deciding that 59,000 Haitians who took refuge in the United States following the 2010 earthquake must return home.

Politicians blasted the decision to repatriate the Haitians within 18 months, removing the Temporary Protected Status (TPS) they received after fleeing the disaster, which killed more than 200,000 people and destroyed much of Haiti's capital Port-au-Prince.

Protesters were planning to gather outside Trump's Mar-a-Lago Club in Palm Beach, where the president was expected to arrive Tuesday afternoon for the Thanksgiving holiday.

While the decision was expected, critics said impoverished Haiti, which still has not recovered from the earthquake and has been wracked by huge hurricanes and a cholera epidemic since then, is not prepared for an influx of returnees.

In addition, the decision, announced Monday by the Department of Homeland Security, puts into limbo the fate of tens of thousands of children born to the Haitians in the United States, giving them legal resident status.

In advance of the DHS decision, thousands of Haitians have traveled across the northern US border with Canada in recent months to seek asylum.

"There is no reason to criminalize, stigmatize, or deport the Haitians who benefitted from TPS. Doing so will break up tens of thousands of families, and will kill the hopes and dreams of so many who have made the United States their home," said Gimena Sanchez of the Washington Office on Latin America advocacy group.

Legislators from both parties representing districts with large Haitian communities lashed out against the decision.

"There is no reason to send 60,000 Haitians back to a country that cannot provide for them. This decision today by DHS is unconscionable," Democratic Senator Bill Nelson, who represents Florida, said.

"These individuals experienced severe loss and suffering as a result of the 2010 earthquake, and forcing them to leave the United States would be detrimental," said Mario Diaz-Balart, a Republican congressman from Miami.

"These individuals are established, respected members of our communities who have made significant contributions, and I urge the administration to reconsider its decision regarding Haitian and Nicaraguan nationals," Diaz-Balart added.

Two weeks ago the Trump administration also terminated the TPS status for 5,300 Nicaraguans, who arrived in the country after Hurricane Mitch slammed Central America in 1998, with renewals granted following other natural disasters.

Tens of thousands of Hondurans under TPS had their stay extended until July, and in January, DHS is expected decide on the status of some 200,000 TPS immigrants from El Salvador.

Since coming to office in January Trump has pressed for a crackdown on immigration, both legal and illegal, saying it has boosted crime and added to security threats.

Acting on Trump's order, DHS and the Justice Department are pressuring cities and states which provide sanctuary to illegal immigrants, including millions in the country for decades, by not turning them over to immigration officers for deportation.

The Justice Department has ordered a cutoff of federal funds to "sanctuary cities" and at the beginning of November warned California, the country's largest state by population, that it would lose out on millions of dollars in federal funds if it continued to shield illegal immigrants from federal immigration and customs officers.

And last week the department warned 29 "sanctuary" cities, counties and states that they would soon have federal funds cut off.

In response, late Monday a San Francisco federal judge ruled that the Trump administration could not act on its threats, calling it unconstitutional and setting up a possible Supreme Court showdown.