President Donald Trump declared Monday the US will begin cutting aid to three Central American countries he accused of failing to stop thousands of migrants heading for the US border. But across his administration there was no indication of any action in response to what he tweeted was a "National Emergy." 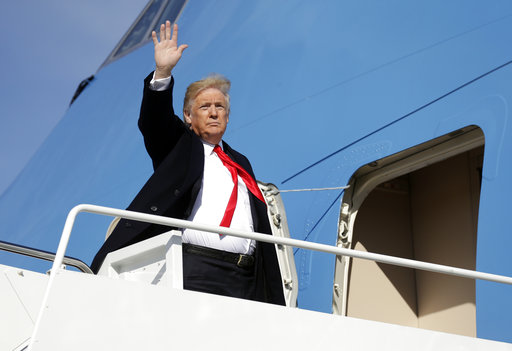 For hours on Monday, White House officials were unable to provide an explanation for the president's threats, which reflected both his apparent frustration with the migrant caravan and his determination to transform it into Republican election gains. Federal agencies said they'd received no guidance on the president's declaration, issued as he attempts to make illegal immigration a focus of next month's midterm elections.

If Trump should follow through with his threat to end or greatly reduce US aid, that could worsen the poverty and violence that are a root cause of the migration he has been railing against, critics said.

Trump tweeted, "Sadly, it looks like Mexico's Police and Military are unable to stop the Caravan heading to the Southern Border of the United States." He added without evidence that "criminals and unknown Middle Easterners are mixed in."

"I have alerted Border Patrol and Military that this is a National Emergy," he wrote. "Must change laws!"

Associated Press journalists traveling with the caravan for more than a week have spoken with Hondurans, Guatemalans and Salvadorans but have not met any of the "Middle Easterners" that Trump claimed had "mixed in" with the Central American migrants. It was clear, though, that more migrants were continuing to join the caravan. 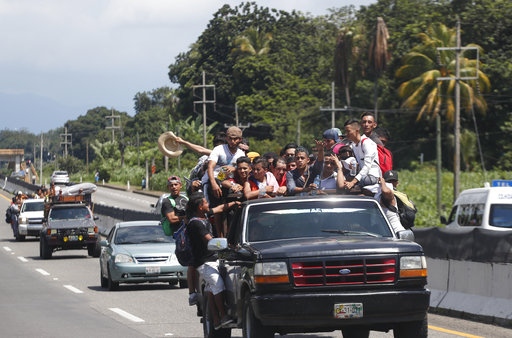 Central American migrants making their way to the US in a large caravan fill the truck of a driver who offered them the free ride, as they arrive to Tapachula, Mexico, Sunday, Oct. 21, 2018. (Photo:AP)

Trump's tweets marked the latest escalation of his efforts to thrust immigration politics into the national conversation in the closing weeks of the congressional elections. He and his senior aides have long believed the issue — which was a centerpiece of his winning presidential campaign — is key to revving up his base and motivating GOP voters to turn out in November.

"Blame the Democrats," he wrote. "Remember the midterms."

At a campaign rally in Houston on Monday night, he falsely accused Democrats of "encouraging millions of illegal aliens to break our laws, violate our borders and overwhelm our nation."

Trump for months has sought to use foreign aid as a cudgel more broadly, threatening to withhold humanitarian and other aid from "enemies of America" and using it to pressure foreign governments to bend to his will. On Monday, he said he would be making good on his threat.

"Guatemala, Honduras and El Salvador were not able to do the job of stopping people from leaving their country and coming illegally to the US. We will now begin cutting off, or substantially reducing, the massive foreign aid routinely given to them," he wrote.

He added later at the White House: "We have been giving so much money to so many different countries for so long that it's not fair and it's not good. And then when we ask them to keep their people in their country, they're unable to do it."

However, it was unclear whether the president's tweets had any policy implications.

A Pentagon spokesman, Army Lt. Col. Jamie Davis, said the Pentagon had received no new orders to provide troops for border security. And a State Department official said the agency had not been given any instructions on eliminating or reducing aid to Central American countries.

Last April, Defense Secretary James Mattis authorized up to 4,000 members of the National Guard to help the Department of Homeland Security with southern border security, and approximately 2,100 were sent under the control of border state governors. That number, Davis said, has not changed.

The Pentagon also said it was going ahead with plans to include Honduras among the South American nations that will be visited this fall by the USNS Comfort, a hospital ship that Mattis has dispatched to help relieve stress on medical care systems as a result of refugee flows from Venezuela. The Comfort began treating patients in Ecuador on Monday and is scheduled to make stops in Peru, Colombia and Honduras, according to Pentagon spokesman Col. Rob Manning.

"The deployment reflects the United States' enduring promise of friendship, partnership and solidarity with the Americas," Manning said.

Asked what the administration was doing to operationalize the president's tweet, White House spokeswoman Sarah Huckabee Sanders told reporters Monday evening that "we're continuing to look at all options on the table."

"The president wants to make sure we're doing everything we can to secure and protect our borders and that's exactly what he's been talking about," she said.

It is Congress, not the president, that appropriates aid money. The White House would have to notify Congress if it wanted to cut or reallocate aid, which could delay or complicate the process.

Rep. Eliot Engel, the top-ranking Democrat on the House Foreign Affairs Committee, said Monday that "my colleagues and I will not stand idly by as this administration ignores congressional intent."

The three countries received about $500 million from the US in fiscal year 2017. That money funds programs that promote economic development and education, as well as supporting democracy and human rights, among other issues. It was not immediately clear how much money Trump now hopes to cut, though the administration already had been pushing to reduce the government's global aid and foreign operations budget by about 30 percent for fiscal 2019 that began Oct 1.

Paul O'Brien, the vice president for policy and advocacy at Oxfam America, said that any attempts to decrease aid to the Central American countries would be "devastating" since the US is a key investor in the region, funding programs on issues ranging from workforce development to reducing violence and improving human rights. In addition, other investors look to the US as a guide.

"If you take that money away or you make it unpredictable, you're actually going to foster the very conditions that are driving people toward migration," said O'Brien, who accused Trump of "essentially seeking to use migrants as a political chip."

Last month, Vice President Mike Pence said that over the last year alone more than 225,000 people from the three Central American countries had attempted to illegally enter the United States, accounting for more than half of those apprehended at the southern border.

Cutting aid could also undermine what the Trump administration has identified as a key foreign policy goal: challenging China's emergence as a strategic rival in the region.

The governments of Guatemala, Honduras and El Salvador did not immediately respond to Trump's threat. Jimmy Morales, president of Guatemala, planned to travel to Tecun Uman on his country's border with Mexico late Monday.

On a three-day campaign swing to Western states last week, Trump raised alarm over thousands of migrants traveling through Mexico to the US and threatened to seal off the US-Mexico border if they weren't stopped.

As the migrants continued their northward march about 900 miles (1,450 kilometers) from the US border, Trump blamed Democrats for their movement — despite the fact that Republicans currently control the White House, the House and Senate.

"Every time you see a Caravan, or people illegally coming, or attempting to come, into our Country illegally, think of and blame the Democrats for not giving us the votes to change our pathetic Immigration Laws!" he wrote.