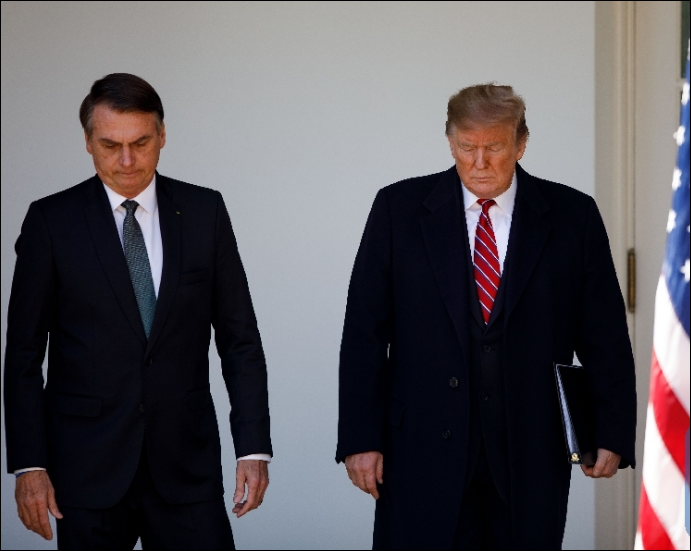 US President Donald Trump (R) attends a joint press conference with his Brazilian counterpart Jair Bolsonaro at the Rose Garden of the White House in Washington D.C., the United States, on March 19, 2019. (Photo: Xinhua)

US President Donald Trump on Tuesday met his Brazilian counterpart Jair Bolsonaro at the White House, looking to reset bilateral ties with the country, a major regional player in South America.

Before their bilateral meeting, Trump told the media at the White House that he may support Brazil joining the North Atlantic Treaty Organization (NATO) and the Organization for Economic Co-operation and Development (OECD).

The United States reportedly would grant Brazil status as a major non-NATO ally, which will give Brazil preferential access to the purchase of US military equipment and technology.

The US president also said he supports Brazil joining the OECD.

A joint statement by Trump and Bolsonaro issued later on Tuesday by the White House also confirmed that Trump had announced his intent to designate Brazil as a major non-NATO ally, and "noted his support for Brazil initiating the accession procedure to become a full member of the OECD."

Ford O'Connell, Republican Strategist and TV news personality, told Xinhua that among the reasons for giving Brazil the status is Trump's concern about Venezuela.

"But the president of Brazil has also shown himself to be very similar to Trump, pro-business and having a capitalistic platform," he said.

"Also Brazil's got over 200 million people. It's a very large country. You've got two countries that back into Venezuela -- Colombia and Brazil -- and you want both of them on your side," he added.

Furthermore, Brazil's agenda on South America and its overall view on issues ranging from illegal immigration to capitalism "pretty much align with Trump's vision," he said.

Christopher Galdieri, assistant professor at Saint Anselm College, told Xinhua that "Trump is in many ways isolated from most of the United States' traditional allies," thus "the emergence of a far-right populist in Brazil gives Trump an opportunity to build a bridge to a figure who's very similar to Trump in style and temperament."

Dan Mahaffee, senior vice president and director of policy at the Center for the Study of Congress and the Presidency, also noted "a stark contrast to previous Brazilian leaders who defined Brazil's role on the global stage often by countering the United States."

The White House statement has spared no effort in touting the two leaders' readiness to engage more on economic and trade ties.

Trump welcomed the signing of a Technology Safeguards Agreement, which will enable US companies to conduct commercial space launches from Brazil, as well as an agreement between US National Aeronautics and Space Administration and the Brazilian Space Agency to launch a jointly developed satellite in the near future.

They also made a number of trade-related commitments. Bolsonaro announced that Brazil will allow greater access to American wheat. In addition, Brazil agreed to ease its restrictions on US pork imports. In order to allow for the resumption of Brazil's beef exports, the United States agreed to schedule a technical visit by the US Department of Agriculture to audit Brazil's raw beef inspection system, "as soon as it is satisfied with Brazil's food safety documentation."

"I think our trade with Brazil will go substantially up in both directions, and we look forward to that," Trump said.

In response, Bolsonaro said that "from now onwards, Brazil will become increasingly engaged with the US."

However, challenges remained for both sides as they eye further engagement. Mahaffee noted that "whether or not Brazilian politics can continue to remain stable, as well as Brazilian economic growth, will be important for the relationship."

"Trump's biggest one will be what's still standing of the foreign policy and diplomatic establishment in Washington and a Congress where the Democratic House majority and some Republicans in both houses are somewhere on a spectrum from skeptical to hostile of Trump's attempts at foreign policy shakeups," said Galdieri.

Trump reiterated his long-held stance that "all options are on the table" when it comes to Venezuela.

In the statement, the two leaders reiterated their support for Venezuela's opposition leader Juan Guaido to "peacefully restore constitutional order to Venezuela."

They also agreed to deepen their partnership through the US-Brazil Security Forum to combat terrorism, narcotics and arms trafficking, cybercrime, and money laundering, and welcomed new measures to enhance border security.

Specifically, Bolsonaro announced Brazil's intent to offer US tourists visa-free entry into the country, and Trump agreed to take the steps necessary to enable Brazil to participate in the US Trusted Traveler Global Entry Program.

Inside Brazil, Bolsonaro's visit to the United States has ignited a firestorm on Twitter. Some users criticize Bolsonaro for getting along too well with Washington and holding a similar immigration policy with Trump.

Bolsonaro's visa-exemption decision was particularly a point of fury since the US has not reciprocated with its own policy for Brazilians.