WORLD Trump: Bolton a disaster on DPRK, out of line on Venezuela

Trump: Bolton a disaster on DPRK, out of line on Venezuela 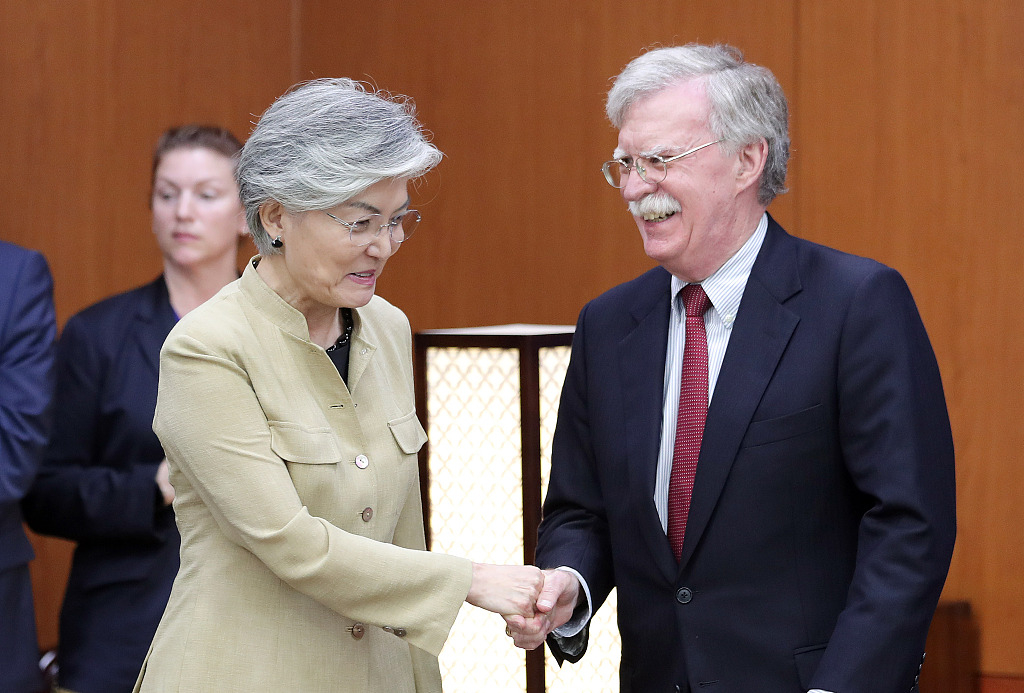 US President Donald Trump said on Wednesday that John Bolton, dismissed a day earlier as national security adviser, had been a "disaster" on the Democratic People's Republic of Korea (DPRK) policy, "out of line" on Venezuela, and did not get along with important administration officials.
Trump said Bolton had made mistakes, including offending DPRK's leader Kim Jong Un by demanding that he follow a "Libyan model" and hand over all his nuclear weapons.
"We were set back very badly when John Bolton talked about the Libyan model ... what a disaster," Trump told reporters at the White House.

"He's using that to make a deal with North Korea (DPRK)? And I don't blame Kim Jong Un for what he said after that, and he wanted nothing to do with John Bolton. And that's not a question of being tough. That's a question of being not smart to say something like that."
Trump also said he disagreed with Bolton on Venezuela but offered no specifics. "I thought he was way out of line and I think I've proven to be right," the president said.
Trump said Bolton, with his abrasive, hardline approach, "wasn't getting along with people in the administration that I consider very important."
"John wasn't in line with what we were doing," he added.
Trump said he got along with Bolton and hoped they parted on good terms, but added: "Maybe we have and maybe we haven't. I have to run the country the way we're running the country."

Trump had been growing more impatient with the failure to oust socialist Venezuelan President Nicolas Maduro through a US-led campaign of sanctions and diplomacy in which Bolton was a driving force.
Bolton was also a chief architect of the Trump administration's hardline policy on Iran.
Asked whether he would consider easing sanctions on Iran to secure a meeting with its leader President Hassan Rouhani at this month's UN General Assembly, Trump replied: "We'll see what happens." Bolton had opposed such a step.
The DPRK has denounced Bolton as a "war maniac" and "human scum." Last year, it threatened to call off a first summit between Kim and Trump after Bolton suggested the Libya model of unilateral disarmament. In the past Bolton had proposed using military force to overthrow the country's government.

Trump's efforts to engage with the DPRK nearly fell apart altogether in February after he followed Bolton's advice at a second summit in Hanoi and handed Kim a piece of paper that called for the transfer of Pyongyang's nuclear weapons and bomb fuel to the United States.
Trump announced he had fired Bolton a day after the DPRK signaled a new willingness to resume stalled denuclearization talks, but it then proceeded with the latest in a spate of missile test launches.
Analysts say Bolton's removal could help US efforts to revive the talks but will not make it easier for Washington to persuade Pyongyang to give up nuclear weapons.
Washington has given no indication so far that it will soften its demand for the DPRK’s ultimate denuclearization, even though with Bolton gone, the risky all-or-nothing gambit is unlikely to be repeated so bluntly.
"This change in personnel could carve out some space for new approaches or thinking about what defines success and how to achieve it," said Jenny Town at 38 North, a Washington-based DPRK project. "Whether it actually does or whether Bolton's view was more deeply entrenched in US thinking on this matter is yet to be seen."