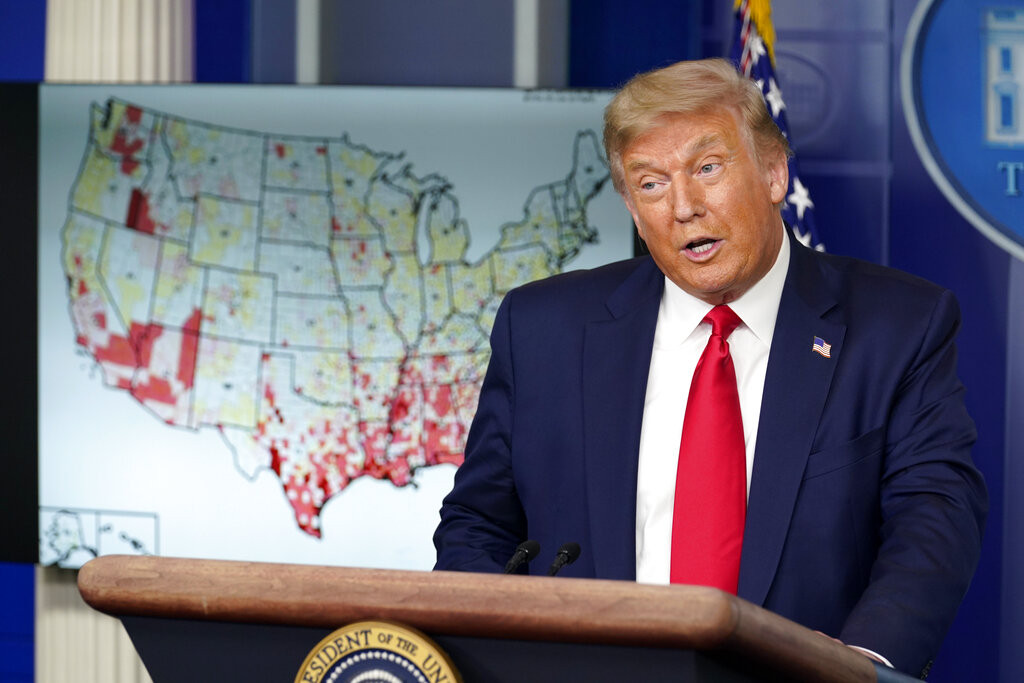 WASHINGTON, July 23 (Xinhua) -- U.S. President Donald Trump said on Thursday that he is canceling the Jacksonville, Florida component of the upcoming Republican National Convention (RNC) over the coronavirus outbreak.

"The timing for this event is not right. It's just not right with what has happened recently, the flare-up in Florida," he said during a press briefing at the White House. "To have a big convention, it's not the right time."

Previously, Trump planned to accept the Republican Party's presidential nomination for a second term in Jacksonville after North Carolina Governor Roy Cooper, a Democrat, had refused to allow the RNC, scheduled for Aug. 24 to Aug. 27 in Charlotte, to take place without restrictions on crowd size and other measures against the coronavirus.

The latest announcement came as Florida is experiencing a surge in new coronavirus cases.

According to the latest tally from Johns Hopkins University, the Sunshine State has reported nearly 390,000 coronavirus infections and more than 5,500 deaths as of Thursday.

"I felt it was wrong to have people going to a hot spot," Trump told reporters explaining his decision. "We didn't want to take any chances."

"We're going to do some other things with tele- rallies and online ... I will still do a convention speech, in a different form," he added. "But we won't do a big crowded convention, per se."

More than 60 percent of registered voters in Florida said they think it will be unsafe to hold the RNC in Jacksonville, according to a Quinnipiac University poll released on Thursday.

The Democratic Party has scaled back its national convention, which will take place in Milwaukee, Wisconsin from Aug. 17. to Aug. 20, where presumptive presidential nominee and former U.S. Vice President Joe Biden will accept the party's nomination to challenge Trump.

The Quinnipiac poll showed Biden has a 13-point lead over Trump in Florida, a key battleground state in the 2020 presidential election.