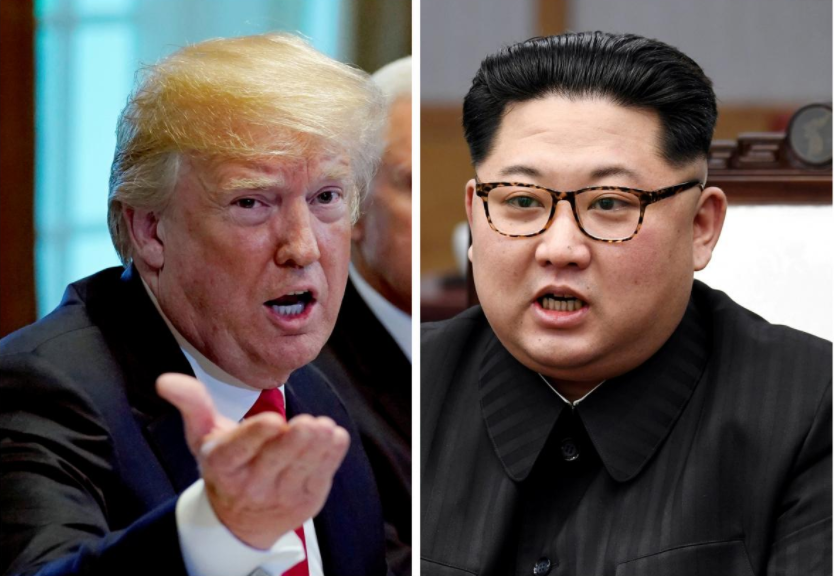 Washington (People’s Daily) – US President Donald Trump announced his cancellation of the Singapore summit set for June 12 in a letter semt to the North Korean leader Kim Jong Un on Thursday.

“Based on tremendous anger and open hostility displayed in your most recent statement, I feel it is inappropriate at this time to have this long-planned meeting,” Trump’s letter read.

USA Today said the likelihood of a summit seemed to be crumbling for weeks, but the timing was still a surprise. As late as Thursday morning, Trump appeared in a taped interview on Fox News in which he said there was “a good chance” the summit with North Korea would take place.

According to the Washington Post, US officials had begun signaling to other countries late last week the summit could be postponed, and they appeared concerned the meeting would not yield a clear result, said one foreign diplomat familiar with summit sources.

A former senior US official familiar with the summit planning said the two sides had not yet agreed on a draft communique, a prepared statement issued at the close of diplomatic summits, and the absence of a working draft had been a red flag for diplomats throughout the week.

The unexpected announcement reverberated throughout Capitol Hill, where US Secretary of State Mike Pompeo had arrived for a budget hearing with the Senate Foreign Relations Committee Thursday morning.

Pompeo read Trump’s letter at the beginning of the Committee hearing. In reaction to the cancelled summit, US Senator Robert Menendez (N.J.), the committee’s top Democrat, admonished the Trump administration for what he said was a “lack of deep preparation,” the Washington Post reported.

“The art of diplomacy is a lot harder than the art of the deal. The reality is that it's pretty amazing that the administration might be shocked that North Korea is acting as North Korea might very well normally act,” said Menendez.

The New Jersey senator also questioned why US officials repeatedly raised the prospect of the “Libya model.”

“I’m not sure that constantly quoting the Libya model is the diplomatic way to try to get to the results that we try to seek in North Korea,” he added.

Pompeo defended but noted there was a breakdown in communication in recent days between the US and North Korean preparation teams when explaining the summit’s demise, the report said.

US Senator Brian Schatz, a Democrat from Hawaii, urged the US to listen to “career diplomats” and other experts when dealing with US-North Korean affairs on his personal Twitter account.

“This is a setback. This is an error. This is what happens when amateurs are combined with warmongers. This is not secretly smart and clever, and any pundit or politician who even flirts with that idea is deeply, deeply unserious.” he tweeted.

US Senate Foreign Relations Chairman Bob Corker told reporters that the summit cancellation is “a little bit of setback.” He added that North Korea was “not quite ready” to have the meeting, CNN reported.

The Wall Street Journal said both sides in recent weeks had been seeking to shape the summit agenda, but the Trump administration has made tough statements of its own. It pointed out that even after the US and North Korea agreed on a summit date and venue, it was clear that substantial gaps remained.

A major gap, according to experts, is whether the US and North Korea shared the same understanding of “denuclearization.” While the Trump administration envisioned a rapid process, Kim spoke about a prolonged one in which sanctions relief would come earlier, the report analyzed.

According to the CNN, a spokesperson for British Prime Minister Theresa May said the UK was “disappointed” that the June summit would not happen.

“We need to see an agreement that can bring about the complete, verifiable and irreversible denuclearization of the Korean Peninsula,” said May.

UN Secretary General Antonio Guterres also expressed deep concern over the summit cancellation. “I urge the parties to continue dialogue to find a path towards the verifiable denuclearization of the Korean Peninsula,” he tweeted.

Despite calling off the meeting, the Trump administration expressed it does not rule out the possibility of a future summit with North Korea. Trump notified Kim in the letter, “If you change your mind having to do with this most important summit, please do not hesitate to call me or write.”

“While many things can happen, and a great opportunity lies ahead potentially, I believe that this is a tremendous setback for North Korea and, indeed, a setback for the world,” said Trump while speaking at the White House.

Trump said he is waiting for his North Korean counterpart to engage in constructive dialogue and actions. “Our very strong sanctions, by far the strongest sanctions ever imposed, and maximum pressure campaign will continue as it has been continuing,” Trump said.