US President Donald Trump on Friday tweeted that he has asked Secretary of State Mike Pompeo to cancel his upcoming trip to the Democratic People's Republic of Korea (DPRK), publicly acknowledging for the first time that progress on the Peninsula denuclearization is lacking.

Trump tweeted that "I have asked Secretary of State Mike Pompeo not to go to North Korea (DPRK), at this time, because I feel we are not making sufficient progress with respect to the denuclearization of the Korean Peninsula." 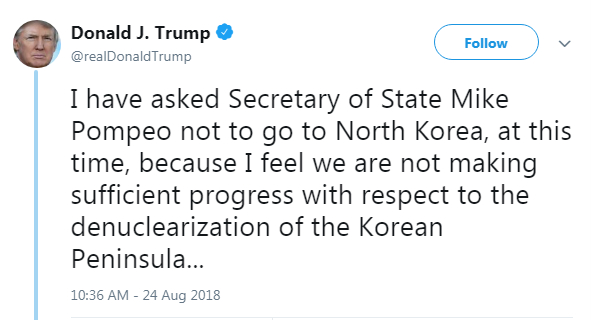 He added that "Secretary Pompeo looks forward to going to North Korea (DPRK) in the near future."

But Trump still kept the door open to a second summit with Kim, with whom the president recently said he has “great chemistry.”

"In the meantime I would like to send my warmest regards and respect to Chairman Kim. I look forward to seeing him soon!" Trump said.

Trump’s statement came just a day after Pompeo said that he has appointed Stephen Biegun as the new special envoy for the DPRK. 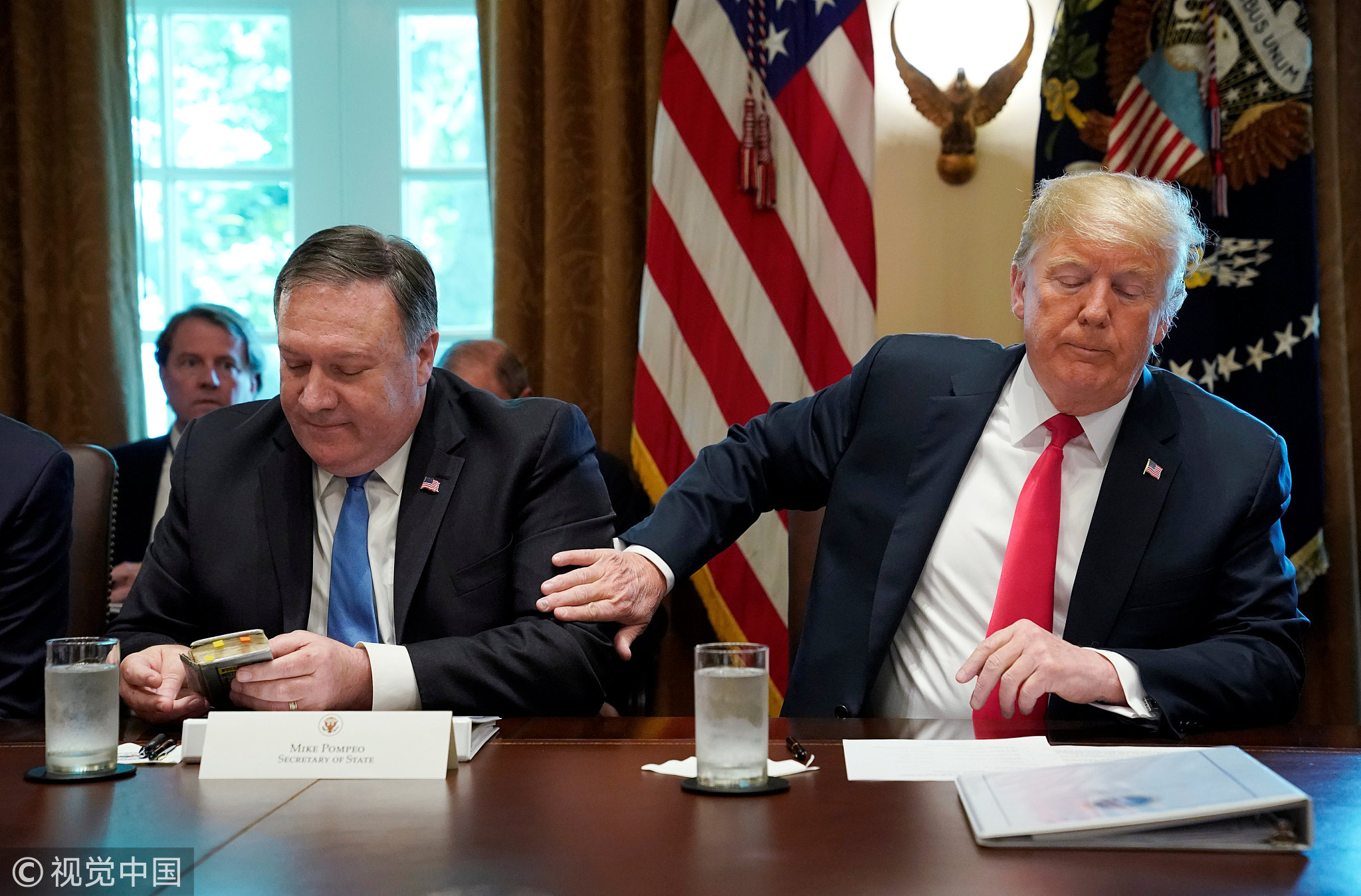 US President Donald Trump pats US Secretary of State Mike Pompeo on the arm after Pompeo read a prayer at the start of a cabinet meeting at the White House in Washington, DC, August 16, 2018. /VCG Photo

He also said that he and Biegun will travel to Pyongyang next week "to make further diplomatic progress towards our objective."

White House officials said Trump asked Pompeo not to go during a Friday meeting and they crafted the tweets together.

Pompeo has visited the DPRK three times, respectively in April, May and July.

Trump on August 20 said he would "most likely" meet with Kim for a second time, and he believed Pyongyang had taken specific steps toward denuclearization. 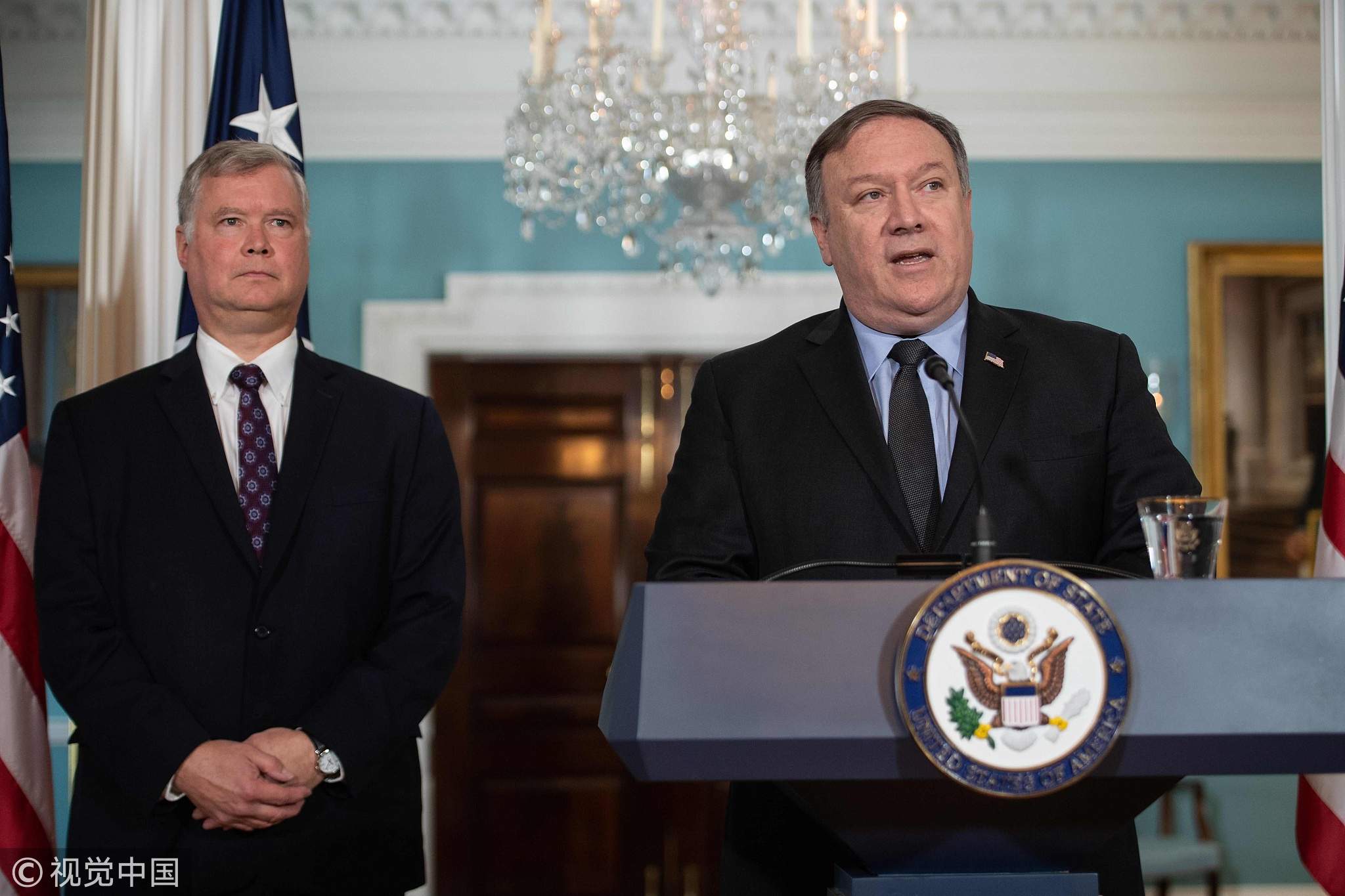 US Secretary of State Mike Pompeo announces Steve Biegun (L) as special representative to the DPRK at the State Department in Washington, DC, on August 23, 2018. /VCG Photo

In the joint statement after the June 12 Trump-Kim meeting in Singapore, Trump committed to providing security guarantees to the DPRK, while Kim reaffirmed his firm and unwavering commitment to a complete denuclearization of the Korean Peninsula.