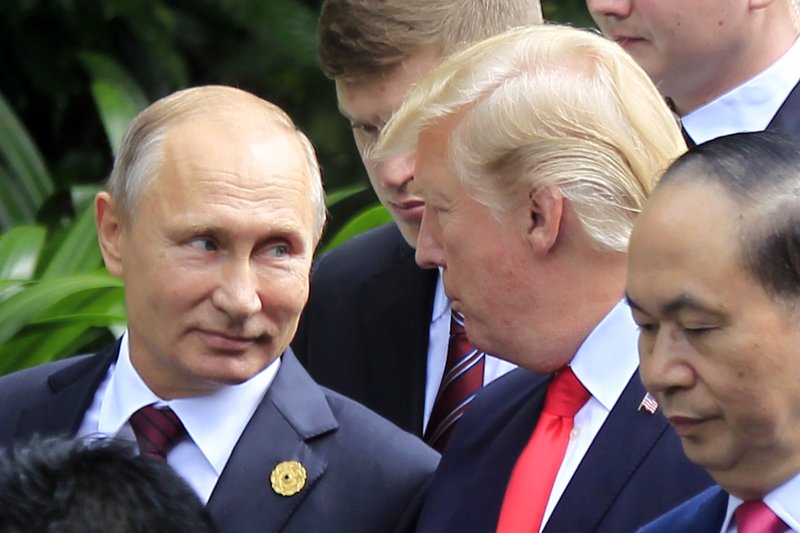 Days before returning home from a whirlwind trip to Asia, President Donald Trump was back on the defensive over Russian election meddling, saying he considers President Vladimir Putin’s denials sincere, dismissing former U.S. intelligence officials as “political hacks” and accusing Democrats of trying to sabotage relations between the two countries.

Speaking to reporters aboard Air Force One, Trump said Russian President Vladimir Putin had again vehemently insisted — this time on the sidelines of an economic summit in Vietnam — that Moscow had not interfered in the 2016 U.S. elections. Trump declined to say whether he believed Putin, but he made clear he wasn’t interested in dwelling on the issue.

“He said he absolutely did not meddle in our election. He did not do what they are saying he did,” Trump said as he traveled to Hanoi, the second-to-last stop of his Asia trip.

“Every time he sees me, he said: ‘I didn’t do that.’ And I believe — I really believe — that when he tells me that, he means it,” Trump said. He called the accusation an “artificial barrier” erected by Democrats — once again casting doubt on the U.S. intelligence community’s conclusion that Russia tried to interfere in the election to help the Republican Trump beat Democrat Hillary Clinton.

Trump is in Hanoi for a brief state visit. He’ll depart for the Philippines later Sunday for a pair of summits that will close out his trip.

Trump and Putin did not have a formal meeting while they were in Vietnam for the Asia-Pacific Economic Cooperation summit, but the two spoke informally several times and reached an agreement on a number of principles for the future of war-torn Syria.

Trump made clear that the issue of Russian meddling in the election hovers over the leaders’ relationship and said it jeopardized their ability to work together on issues including North Korea’s escalating nuclear program and the deadly conflict in Syria.