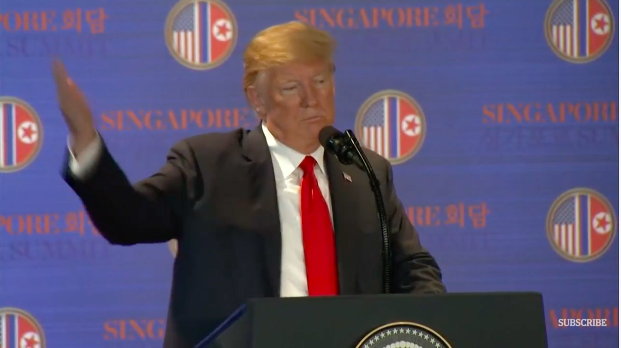 US President Donald Trump on Tuesday said his historic summit with North Korean leader Kim Jong-un in Singapore was “honest, direct and productive".

Trump made the remarks at a press conference after signing an agreement with Kim. The US president expressed his gratitude to Singapore for hosting the summit and paid tribute to the leaders of South Korea, China and Japan for their efforts in realizing the summit.

Trump said his meeting with Kim was "honest, direct and productive," adding that Kim is a talented man.

"There is no limit to what North Korea can achieve when it gives up nuclear weapons and embraces commerce," Trump noted.

Trump announced a freeze in war games with its ally South Korea while negotiations with North Korea continue. Trump said the decision is a cost-saving measure, but North Korea has long objected to the drills as a security threat.

Trump also said that the United States will not stop its economic sanctions against North Korea until the international community confirms that North Korea completely removes its nuclear weapons.

Trump said that North Korea has the potential to be a great place, and he had spent “intensive hours” with Kim.

Trump said that Kim has given his “unwavering commitment” to denuclearization by verbally agreeing to destroying North Korea’s “major missile engine testing sites” before signing the agreement.

The US President said Kim is a “leader who ushered in a glorious new era of prosperity for his people.”