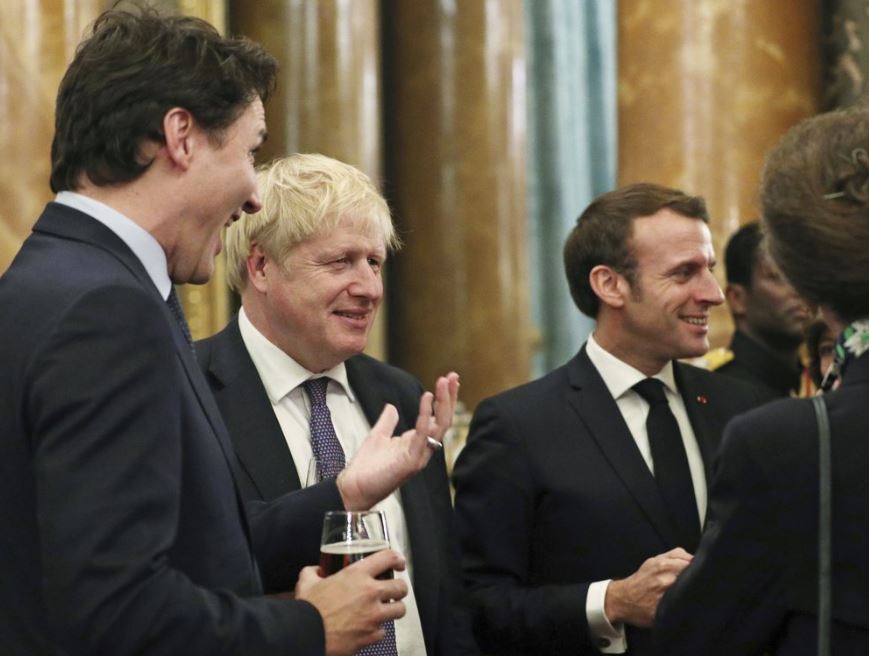 NATO leaders professed unity on Wednesday at a summit near London — but a spat over off-the-cuff chit chat at a royal reception rattled their show of solidarity.

US President Donald Trump branded the leader of America’s northern neighbor “two-faced” after Canadian Prime Minister Justin Trudeau appeared to gossip about Trump in comments caught on camera and microphone.

Trudeau could be heard saying incredulously, “he takes a 40-minute press conference off the top.” Trudeau confirmed that was a reference to Trump’s long and unscheduled question-and-answer session with journalists earlier Tuesday.

Trudeau also said: “You just watched his team’s jaws drop to the floor.” He explained Wednesday that was in reference to Trump’s decision to hold the next Group of Seven meeting at Camp David, the presidential retreat.

Footage of the palace reception was recorded by a pool camera. The clip was posted online by Canadian broadcaster CBC and has been viewed more than 5 million times.

Speaking Wednesday at the summit venue in Watford, outside London, Trump said Trudeau was likely upset that the US president had broached the fact that Canada falls short of the NATO target of spending 2% of its gross domestic product on defense.

“Well he’s two-faced,” Trump told reporters. “And honestly, with Trudeau he’s a nice guy, I find him to be a very nice guy but you know the truth is that I called him out on the fact that he’s not paying 2% and I guess he’s not very happy about it.”

Trudeau had a quiet word and a handshake with Trump as he arrived at the summit Wednesday, and later tried to shrug off the episode.

“As you all know, we have a very good and constructive relationship between me and the president,” Trudeau told reporters at a news conference.

Asked if the incident had given him pause for thought, Trudeau said that ensuring the focus of attention remained on matters of substance “is something that we’re all going to try to do a little harder.”

Johnson, meanwhile, professed ignorance when asked by reporters about the conversation.

“That’s complete nonsense,” he said, adding: “I really don’t know what is being referred to there.”

Leaders of the 29 NATO states met to mark the 70th anniversary of the military alliance — and trying to patch up differences over defense spending, the alliance’s strategic direction and member nation Turkey’s military action in northern Syria.

The two-day gathering ended with a show of unity, as the leaders declared their commitment to the alliance’s principle of collective defense, saying in their final declaration that “an attack against one Ally shall be considered an attack against us all.”