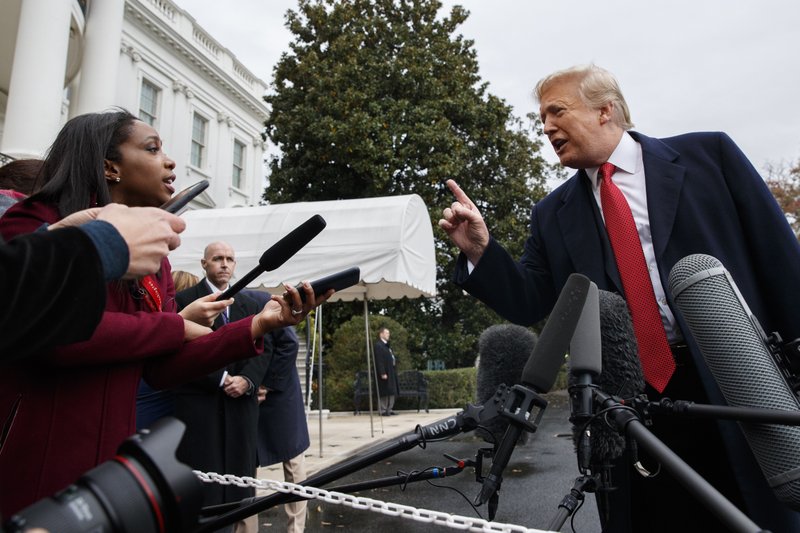 US President Donald Trump claimed on Friday that a White House-released video depicting contact between a staffer and a CNN reporter wasn’t altered, and he seemingly threatened to revoke the White House press credentials of more reporters.

Trump insisted that the video distributed by White House press secretary Sarah Huckabee Sanders was simply a “close-up” and “was not doctored.”

“Nobody manipulated it. All that is is a close-up,” said the president, who then attacked the reporter for asking the question and called him “dishonest.”

A frame-by-frame comparison with an Associated Press video of the same incident from Trump’s postelection news conference Wednesday shows that the video tweeted by Sanders appears to speed up CNN reporter Jim Acosta’s arm movement when he makes contact with a White House intern who was trying to take away Acosta’s microphone. The speedup appears to make the gesture more threatening.

Trump, in remarks Friday, also did not back off his administration’s decision to suspend Acosta’s press credential, which allows the CNN correspondent access to the White House grounds.

The president said he had not decided if Acosta’s pass would be reinstated and he suggested there “could be others” who lose their credentials. He belittled several of the reporters gathered around him. He said one had asked “a stupid question,” and he singled out April Ryan, a correspondent for Urban Radio Networks, calling her “very nasty” and “a loser.”

Ryan, who is also a CNN contributor, tweeted in response: “I love this country and have the most respect for the Office of the President. I will continue to ask the questions that affect America, all of America.”

Trump’s latest attacks on the media came in the wake of his free-wheeling and contentious news conference two days earlier, and followed demands by several journalists and organizations — including the American Society of News Editors, the Associated Press Media Editors and the White House Correspondents Association — that Acosta’s press pass be reinstated.

“It is the essential function of a free press in every democracy to independently gather and report information in the public interest, a right that is enshrined in the First Amendment,” said Julie Pace, AP’s Washington bureau chief. “We strongly reject the idea that any administration would block a journalist’s access to the White House.”

The New York Times editorialized in favor of restoring Acosta’s pass, saying it signaled Trump’s view that asking hard questions disqualifies reporters from attending briefings. The newspaper said that if Sanders was so offended by physical contact, “what did she have to say when her boss praised as ‘my kind of guy’ Rep. Greg Gianforte of Montana, who was sentenced to anger management classes and community service for body-slamming a Guardian reporter last spring?”

It’s rare for the White House to pull the media credentials.

During Lyndon Johnson’s presidency, the Secret Service denied clearance to Robert Sherrill, a reporter for The Nation who had gotten into physical fights with government officials. During the George W. Bush presidency, Trude Feldman, who worked for various news outlets, was suspended for 90 days after security cameras recorded her looking through a press aide’s desk late one night. In the 1970s, President Richard Nixon tried to get Washington Post reporters banned from the White House.

Despite losing his White House pass, Acosta traveled to Paris this weekend to cover Trump’s trip to meet with world leaders. He tweeted a photo of himself standing in front of the Eiffel Tower early Friday.

Abba Shapiro, an independent video producer who examined the Wednesday footage at AP’s request, noticed that frames in the tweeted video of the exchange at the news conference were frozen to slow down the action, allowing it to run the same length as the AP one.

Sanders, who hasn’t said where the tweeted video came from, noted that it clearly shows Acosta made contact with the intern. In her statement announcing Acosta’s suspension, she said the White House won’t tolerate “a reporter placing his hands on a young woman just trying to do her job.”

While the origin of the manipulated video is unclear, its distribution marked a new low for an administration that has been criticized for its willingness to mislead.

CNN has labeled Sanders’ characterization of Acosta’s exchange with the intern as a lie. Its position has been supported by witnesses, including Reuters White House correspondent Jeff Mason, who was next to Acosta during the news conference and tweeted that he did not see Acosta place his hands on the White House employee. Rather, Mason said he saw Acosta holding on to the microphone as the intern reached for it.