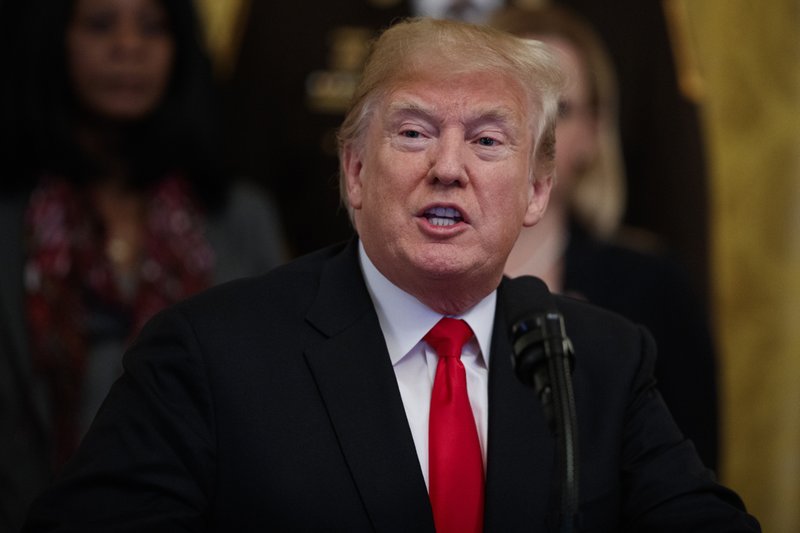 President Donald Trump vows that "acts or threats of political violence have no place in the United States." He was speaking after multiple reports of suspicious devices being sent to Democrats, media companies and prominent individuals. (Photo: AP)

President Donald Trump condemned the series of attempted attacks on high-profile Democrats and CNN on Wednesday, declaring that “acts or threats of political violence have no place in the United States.”

Attempting a bipartisan pause during a divisive campaign season, Trump called for unity after crude pipe bombs targeting Hillary Clinton, Barack Obama, CNN and others were intercepted Tuesday and Wednesday. Trump called the suspicious packages “despicable” and said a “major federal investigation” was underway, but did not specifically mention the media.

Coming just 13 days before the midterm elections, the attempted attacks underscored the deeply divided moment in American politics. The packages were directed at prominent Democrats and a cable network that have been singled out and criticized by Trump. At his rallies and on Twitter, Trump has frequently lambasted Clinton, Obama, CNN and others, often with menacing undertones.

At a rally in Montana last week, for instance, Trump praised Republican Rep. Greg Gianforte, who pleaded guilty to assaulting a reporter, saying that “any guy that can do a body slam ... he’s my guy.” And he has repeatedly singled out CNN as he rails against the “fake news” media, egging on his crowds as they jeer reporters covering his rallies and smiling as they chant “CNN sucks!”

In his remarks at the White House on Wednesday, Trump described “suspicious packages and devices mailed to current and former high-ranking government officials,” and urged the nation to come together and send “one very clear, strong, unmistakable message that acts or threats of political violence of any kind have no place in the United States of America.”

“We’re extremely angry, upset, unhappy about what we witnessed this morning, and we will get to the bottom of it,” said Trump, who has sometimes struggled to show empathy at moments of national sorrow.

But Trump made no specific reference to the press, and criticism came quickly that the White House was failing to address the role that the president’s incendiary rhetoric has had in stoking tensions. CNN President Jeff Zucker especially pointed in his critique.

“There is a total and complete lack of understanding at the White House about the seriousness of their continued attacks on the media,” he said in a statement. “The President, and especially the White House Press Secretary, should understand their words matter.”

In her initial statement, White House press secretary Sarah Huckabee Sanders condemned “the attempted violent attacks recently made against President Obama, President Clinton, Secretary Clinton, and other public figures,” saying, “These terrorizing acts are despicable” and calling the perpetrators “cowards.” That statement was sent to reporters before news surfaced of the CNN package, but it was tweeted after the news had broken.

Sanders later tweeted that the condemnation “certainly includes threats made to CNN as well as current or former public servants.” Trump’s campaign also apologized for an email it sent criticizing CNN less than two hours after that network’s New York headquarters was evacuated. Campaign chairman Brad Parscale said that it was an automated message and that the campaign does not condone violence against anyone who works for the network.

At his campaign rallies and in the White House, Trump has at times casually endorsed violence. At an Iowa rally in 2016, he encouraged supporters to “knock the crap” out of protesters in the crowd. More recently, he told law enforcement officers not to be “too nice” when detaining suspects. Last year, he tweeted a video that showed him tackling and punching a person whose head had been digitally replaced with the CNN logo.

But recently Trump has sought to flip the script on Democrats, citing their aggressive opposition to Brett Kavanaugh’s Supreme Court nomination as evidence that the party is a dangerous “mob.”

Trump has also singled out, by name, all of those known to have received packages, calling Rep. Maxine Waters a “low-IQ individual” and labeling ex-CIA Director John Brennan, whose security clearance he stripped, a liar and a disgrace. The bomb sent to CNN was addressed to Brennan, who also appears on air on other broadcast and cable outlets.

Trump, who made pointed, personal attacks on Hillary Clinton a centerpiece of his 2016 bid — dubbing her “Crooked Hillary” and saying she belongs in prison — has continued to mock her in nearly every rally speech.

In tweets and interviews, he also has singled out billionaire George Soros, accusing him, without evidence, of paying the protesters who turned out to oppose Kavanaugh’s nomination.

And he has recently lashed out at former Attorney General Eric Holder, zeroing in on Holder’s statement that when those on the opposite side of the aisle “go low,” Democrats should “kick ’em.”

The president’s allies pushed back on the suggestion that he contributes to a toxic political atmosphere.

Sen. Orrin Hatch, R-Utah, said: “I don’t see anything really wrong with the president. He’s in a tough position, attacked on all sides, and he ought to be able to express himself.”

Sen. Ted Cruz of Texas, who is facing a fierce challenge from Democrat Beto O’Rourke, tweeted that “violence is never OK” and said the reports were “deeply, deeply disturbing. America is better than this.”

Rep. Steve Scalise of Louisiana, who was severely wounded in a 2017 shooting that targeted Republican members of Congress on a suburban baseball field, wrote on Twitter that he had experienced “first-hand the effects of political violence” and said that as a nation “we must agree that this is a dangerous path and it cannot become the new normal.”