US President Donald Trump's Supreme Court nominee Amy Coney Barrett told lawmakers Tuesday she would put personal and religious beliefs aside when deciding landmark cases, but stopped short of revealing how she would rule on hot-button issues like abortion. 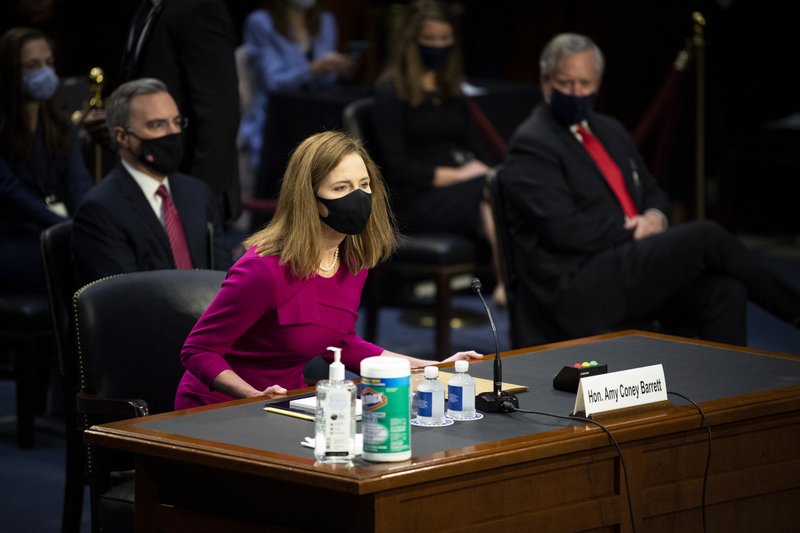 The 48-year-old judge and devout Catholic, whose expected confirmation would swing the balance on the high court firmly in the conservative camp, did suggest that abortion rights were not etched in stone permanently with the landmark 1973 Roe v. Wade decision.

And she refused to commit to recusing herself from any legal case involving the November 3 election, despite Trump, trailing Democrat Joe Biden in polls, having declared he wants her approved for any such eventuality.

But after more than seven hours of tough questioning from Democrats on the Senate Judiciary Committee, Barrett supplied critics with little ammunition to derail her nomination.

With solid support from majority Republicans, she is expected to easily garner approval from the committee after four days of hearings, and then be confirmed before the election by the full Senate.

After liberal icon Ruth Bader Ginsburg died last month leaving the nine-member court with a vacancy, Trump has rushed to fill it, both to fire up his voter base and to avoid affording Biden the opportunity if he wins the White House.

Democrats have argued that, with Ginsburg's death so close to an election, a nomination should wait until the next president has been chosen.

A respected Notre Dame law professor with just three years under her belt as an appeals court judge, Barrett is supported by conservatives for her personal opposition to abortion.

Most see her as the key vote needed to overturn Roe v. Wade and open the door to tougher restrictions on abortion.

Many also hope that, as Trump has called for, she will help the high court overturn the Affordable Care Act, which extended government-backed health insurance to millions of Americans under Barack Obama.

Barrett describes herself as a constitutional "originalist" in the mold of the deeply conservative Supreme Court justice Antonin Scalia, who died in 2016.

But pressed with questions, she said the law, and not her personal beliefs or Trump's expectations, would determine her rulings, and she would not declare her stance before cases come before her.

"I made no promises to anyone. I don't have any agenda." Barrett told Democratic Senator Mazie Hirono, who said Trump expected her to help overturn Roe v. Wade.

Yet she also said the Roe case was not one of the Supreme Court's "superprecedents," or decisions that few if any people think should ever be challenged.

"I have an agenda to stick to the rule of law and decide cases as they come," she said.

'Not on a mission'

Seated alone at a desk at the center of the hearing room, Barrett said she was capable of setting aside her beliefs, including her Catholic faith, when studying and ruling on cases.

"Judges can't just wake up one day and say 'I have an agenda. I like guns, I hate guns, I like abortion, I hate abortion,' and walk in like a royal queen and impose their will on the world," Barrett said.

She fended off questions on her stance on the Affordable Care Act even as a test case looms at the court in November and Trump has repeatedly said he wants the program killed.

Democrats repeatedly cited cases of people with debilitating diseases and injuries who depended on the ACA and would be left without health care if the court rules the program illegal.

"I'm not here on a mission to destroy the Affordable Care Act," Barrett insisted. "I will approach it with no bias."

Barret was also pressed on what she would do if, as in 2000, a case comes to the high court after November 3 that will decide the winner of the election, given that one of the candidates, Trump, will have installed her on the court.

She acknowledged that laws require a justice or judge to recuse themself when there is an appearance of bias.

If an election case does rise to the Supreme Court, she said, she would consider recusal, in consultation with the other justices.

"If I were confirmed, and an election dispute arises, you know, both of which are ifs, I would very seriously undertake that process and I would consider every relevant factor," she said.