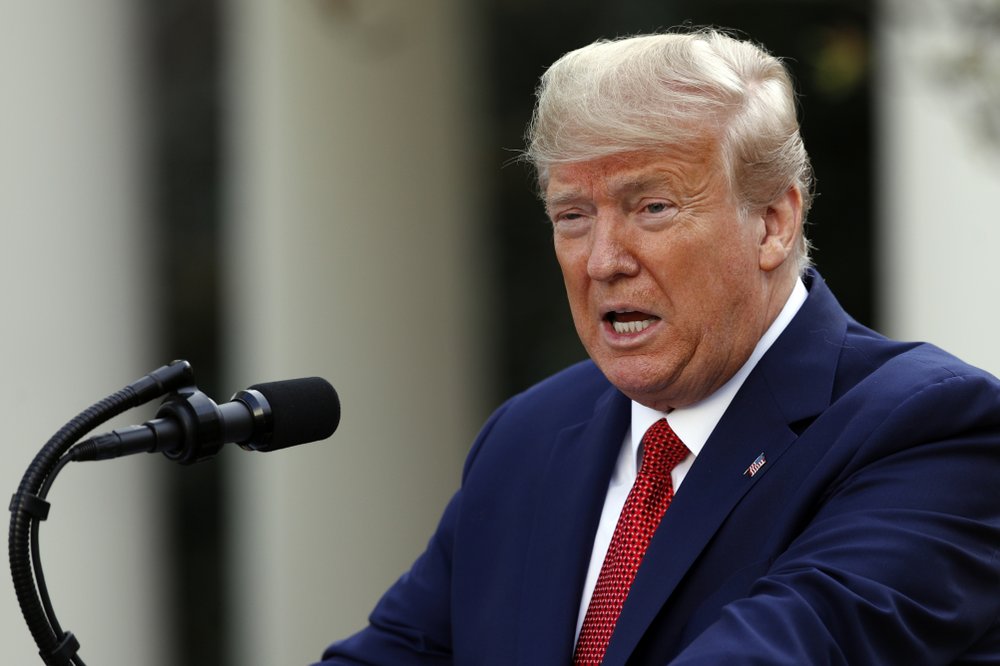 US President Donald Trump speaks during a coronavirus task force briefing in the Rose Garden of the White House, Sunday, March 29, 2020, in Washington. (Photo: AP)

Siding with public health experts’ dire projections, President Donald Trump on Monday defended his decision to extend restrictive social distancing guidelines through the end of April, while bracing the nation for a coronavirus death toll that could exceed 100,000 people.

“The worst that could happen is you do it too early and all of a sudden it comes back,” Trump said during a nearly hour-long call-in interview with “Fox & Friends” as members of his coronavirus task force fanned out across other media outlets to warn the virus’ spread was only just beginning.

The comments came a day after Trump made a dramatic course reversal and announced that he would not be moving to ease the guidelines and get the economy back up and running by Easter, as he said last week he hoped to do.

In the face of stark projections from his team and searing images of overwhelmed hospitals in his native New York City, Trump instead extended to April 30 the social distancing guidelines, which had been set to expire Monday. Many states and local governments already have stiffer controls in place on mobility and gatherings.

Trump’s impulse to reopen the country, driven by pleas from business leaders, met a sober reality check from health experts, including Dr. Anthony Fauci, the government’s top infectious disease expert, who on Sunday said the U.S. could experience between 100,000-200,000 deaths and millions of infections from the pandemic.

That warning hardened a recognition in Washington that the struggle against the coronavirus will not be resolved quickly even as Trump expressed a longing for normalcy.

“It would not have been a good idea to pull back at a time when you really need to be pressing your foot on the pedal as opposed to on the brakes,” Fauci said on CNN on Monday, describing how he and Dr. Deborah Birx, the coronavirus task force coordinator, had convinced Trump to reconsider.

“We showed him the data. He looked at the data. He got it right away,” Fauci said. “It was a pretty clear picture. Dr. Debbie Birx and I went in to the Oval Office and leaned over the desk and said, ‘Here are the data. Take a look.’ He just shook his head and said, ‘I guess we got to do it.’”

Americans are now being asked to prepare for at least another 30 days of severe economic and social disruption, with schools and businesses closed and public life upended. One in 3 Americans remain under state or local government orders to stay at home to slow the spread of the virus, and employment claims have already skyrocketed.

Trump also spoke with the nation’s governors on Monday, as did other members of his administration. Birx told the governors that it’s “several weeks away from the peak of the curve for the United States.” Trump said that modeling projected substantially more deaths if the nation did not incorporate social distancing.

“I thought that was a very important study they did and it sure solved a lot of problems in my own mind and maybe in your minds,” Trump said in an audio that was obtained by The Associated Press.

Republican Gov. Larry Hogan of Maryland voiced appreciation for the $2.2 trillion economic stimulus bill that Trump signed into law last week and the president’s acknowledgement that states will need more help, but he also emphasized that governors are “still frustrated” about a scarcity of medical supplies.

The federal guidelines that Trump elected to continue recommend against group gatherings larger than 10 and urge older people and anyone with existing health problems to stay home. People are urged to work at home when possible and avoid restaurants, bars, nonessential travel and shopping trips.

For more than a week, Trump had been bombarded by calls from outside business leaders who urged him to begin reopening the nation’s economy, at least in places with low infection rates, and warned of catastrophic consequences that could damage his reelection chances if it remained shuttered for much longer.

Trump told “Fox & Friends” that “nobody” was “more worried” about the economic impact on the country than he was. But he said, “We want to do something where we have the least death.”

Trump, who has largely avoided talk of potential death and infection rates, cited projection models Sunday that said 2.2 million people or more could have died had social distancing measures not been put in place. And he said the country would be doing well if it “can hold” the number of deaths “down to 100,000.”

In addition to the numbers, Trump said he was moved by harrowing scenes from New York, particularly hard-hit Elmhurst Hospital in his native Queens. He described the images he’d seen on television with “body bags all over, in hallways. I’ve been watching them bring in trailer trucks — freezer trucks... because they can’t handle the bodies, there are so many of them.... I’ve seen things that I’ve never seen before.”

But experts warn that those scenes could play out across the country, as the virus spreads. Birx and Fauci said even areas that have so far been spared must prepare for the eventuality that they, too, will become hot spots, with undetected cases likely in existence now.

“It’s critical that even if you don’t see it, it could be circulating in your community,” Birx told “CBS This Morning” on Monday.

Fauci said on ABC’s “Good Morning America” that smaller U.S. cities are now ripe for the kind of acceleration that has occurred in New York.

“If you look throughout the country there are a number of smaller cities that are sort of percolating along,” Fauci said. “It looks like it’s low level, it starts to accelerate, then it goes way up.”

The U.S. had more than 140,000 COVID-19 cases reported by Monday morning, with more than 2,500 deaths, according to data compiled by Johns Hopkins.

Most people who contract COVID-19 have mild or moderate symptoms, which can include fever and cough but also milder cases of pneumonia, sometimes requiring hospitalization. The risk of death is greater for older adults and people with other health problems. Hospitals in the most afflicted areas are straining to handle patients and some are short of critical supplies.

In the “Fox & Friends” interview, Trump also said his administration was considering providing hazard pay for medical professionals who are on the front lines of the pandemic. Treasury Secretary Steven Mnuchin agreed, telling Fox Business Network in a separate interview that the idea “makes a lot of sense” and is “definitely something we’ll put in the next bill.” Some lawmakers have said a fourth economic relief package eventually will be needed.

For weeks, Trump had minimized the gravity of the pandemic, and House Speaker Nancy Pelosi on Sunday accused Trump of “denial” in the crisis and called it “deadly.”

Asked whether she believes that attitude cost American lives, Pelosi told CNN: “Yes, I am. I’m saying that.”

“She’s a sick puppy in my opinion,” Trump said. “I think it’s a disgrace to her country, her family”