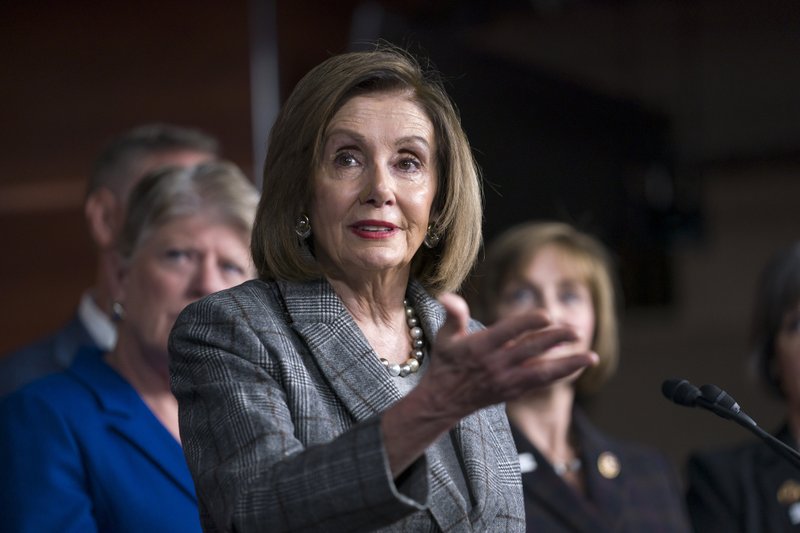 Speaker of the House Nancy Pelosi, D-Calif., discusses her recent visit to the UN Climate Change Conference in Madrid, Spain, during a news conference with the congressional delegation to that summit, at the Capitol in Washington, December. 6, 2019. (Photo: AP)

House Democrats have reached a tentative agreement with labor leaders and the White House over a rewrite of the US-Mexico-Canada trade deal that has been a top priority for President Donald Trump.

That’s according to a Democratic aide not authorized to discuss the talks and granted anonymity.

Details still need to be finalized and the US Trade Representative will need to submit the implementing legislation to Congress. No vote has been scheduled. The aide requested anonymity because the agreement is not official.

The new, long-sought trade agreement with Mexico and Canada would give both Trump and his top adversary, House Speaker Nancy Pelosi, a major accomplishment despite the turmoil of his likely impeachment.

An announcement could come as early as Monday. Pelosi, D-Calif., still has to officially sign off on the accord, aides said.

The new trade pact would replace the 25-year-old North American Free Trade Agreement, which eliminated most tariffs and other trade barriers involving the United States, Mexico, and Canada. Critics, including Trump, labor unions and many Democratic lawmakers, branded NAFTA as a job killer for America because it encouraged factories to move south of the border, capitalize on low-wage Mexican workers and ship products back to the US duty-free.

Weeks of back-and-forth, closely monitored by Democratic labor allies such as the AFL-CIO, have brought the two sides together. Pelosi is a longtime free-trade advocate and supported the original NAFTA in 1994. Trump has accused Pelosi of being incapable of passing the agreement because she is too wrapped up in impeachment.

Democrats from swing districts have agitated for finishing the accord, in part to demonstrate some accomplishments for their majority.

By ratifying the agreement, Congress could lift uncertainty over the future of US commerce with its No. 2 (Canada) and No. 3 (Mexico) trading partners last year and perhaps give the US economy a modest boost. The US farmers are especially eager to make sure their exports to Canada and Mexico continue uninterrupted.

US Trade Representative Robert Lighthizer last year negotiated the replacement agreement with Canada and Mexico. But the new USMCA accord required congressional approval and input from top Democrats like Pelosi and Ways and Means Committee Chairman Richard Neal of Massachusetts, who have been engaged in lengthy, detailed negotiations over enforcement provisions and other technical details.

Republicans leaders and lawmakers have agitated for months for the accord but Pelosi has painstakingly worked to bring labor on board. Democrats see the pact as significantly better than NAFTA and an endorsement by AFL-CIO President Richard Trumka could be the key to winning significant Democratic support.

The pact contains provisions designed to nudge manufacturing back to the United States. For example, it requires that 40% to 45% of cars eventually be made in countries that pay autoworkers at least $16 an hour — that is, in the United States and Canada and not in Mexico.

The trade pact picked up some momentum after Mexico in April passed a labor-law overhaul required by USMCA. The reforms are meant to make it easier for Mexican workers to form independent unions and bargain for better pay and working conditions, narrowing the gap with the United States.

Mexico ratified USMCA in June and has budgeted more money later this year to provide the resources needed for enforcing the agreement.