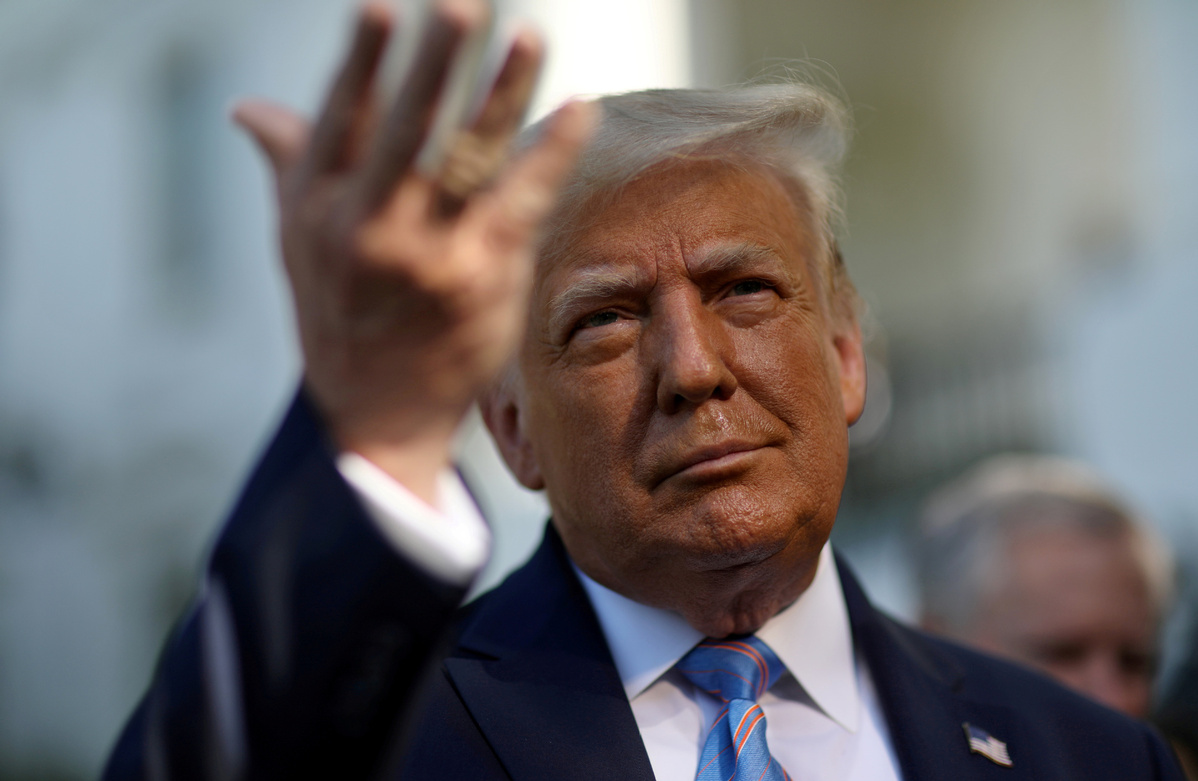 US President Donald Trump speaks to the news media before departing on Marine One for travel to Midland, Texas from the South Lawn of the White House in Washington, US, July 29, 2020. (Photo: Agencies)

WASHINGTON - US President Donald Trump said on Thursday that he doesn't want to delay the November election hours after raising the possibility on Twitter.

"Do I want to see a date change? No," Trump said during a press conference at the White House. "I don't want a delay. I want to have the election."

"But I don't want to see a crooked election," he added, doubling down his criticism of mail-in voting.

"I also don't want to have to wait for three months and then find out that the ballots are all missing and the election doesn't mean anything," the president told reporters. "Mail-in ballots will lead to the greatest fraud."

In a tweet on Thursday morning, Trump claimed -- without providing any proof or evidence -- that 2020, with mail-in voting, will be "the most inaccurate & fraudulent election in history."

"It will be a great embarrassment to the USA," he wrote. "Delay the Election until people can properly, securely and safely vote???"

The tweet immediately ignited a political firestorm and has drawn bipartisan pushback from Capitol Hill, as legal analysts agreed that Trump has no authority to delay the presidential election as the US Constitution gives Congress the power to set the date.

"The Congress may determine the Time of choosing the Electors, and the Day of which they shall give their Votes; which Day shall be the same throughout the United States," reads a section of the country's Constitution.

Since 1845, the US Congress has required the appointment of presidential electors to take place on the Tuesday after the first Monday in November, which falls on Nov. 3 this year.

US Congresswoman Liz Cheney of Wyoming, also the House Republican Conference chair, tweeted that the resistance to Trump's suggestion among Republicans is "overwhelming."

"We must take all necessary steps to prevent election fraud," Cheney said. "But we will not be delaying the election."

Most US states are expanding access to mail-in voting in order to allow voters to cast their ballots safely in the November election in light of the coronavirus pandemic that has led to nearly 4.5 million infections and more than 152,000 deaths as of Thursday night.

The increased use of mail-in ballots, according to experts, will likely mean results won't be finalized on the night of Nov. 3 since some states cannot begin counting them until Election Day.

In another tweet on Thursday afternoon, Trump acknowledged he was trying to bring media attention to what he called "risks" from universal mail-in voting to the election.

The president, however, said that he totally supports absentee voting, despite that voting pundits have said the verification process is the same for absentee and mail-in ballots, and many states even consider them to be the same thing.

The attacks on mail-in voting from Trump came as national polls have shown that he is falling behind his Democratic opponent, former US Vice President Joe Biden, in the 2020 race.

Biden led Trump 49.9 percent to 41.6 percent as of Thursday night in the RealClearPolitics average of national polls.

Meanwhile, polls in key battleground states, including Wisconsin, Michigan, Pennsylvania, Florida, and Arizona, have also showed that Biden is ahead of Trump by at least several points.

Trump has repeatedly called polls showing him trailing Biden "fake" and from time to time touted what has been called "silent majority" supporting his presidency and re-election.

Some critics also viewed Trump's remarks on Thursday as an effort to distract from the negative news that the US economy contracted at an annual rate of 32.9 percent in the second quarter, which could deal a blow to his central argument of his reelection bid.

Kyle Kondik, a non-partisan analyst at the University of Virginia Center for Politics, tweeted that Trump's suggestion of delaying the election "seems to be one of his more obvious attempts to change the subject given this morning's wretched GDP numbers."

In April, Biden warned that Trump would be thinking of delaying the election.

"Mark my words: I think he is going to try to kick back the election somehow; come up with some rationale why it can't be held," Biden said.

At that time, the Trump campaign dismissed Biden's accusation as "the incoherent, conspiracy theory ramblings of a lost candidate who is out of touch with reality."