WORLD Trump denies lying to US about virus after bombshell book

Trump denies lying to US about virus after bombshell book 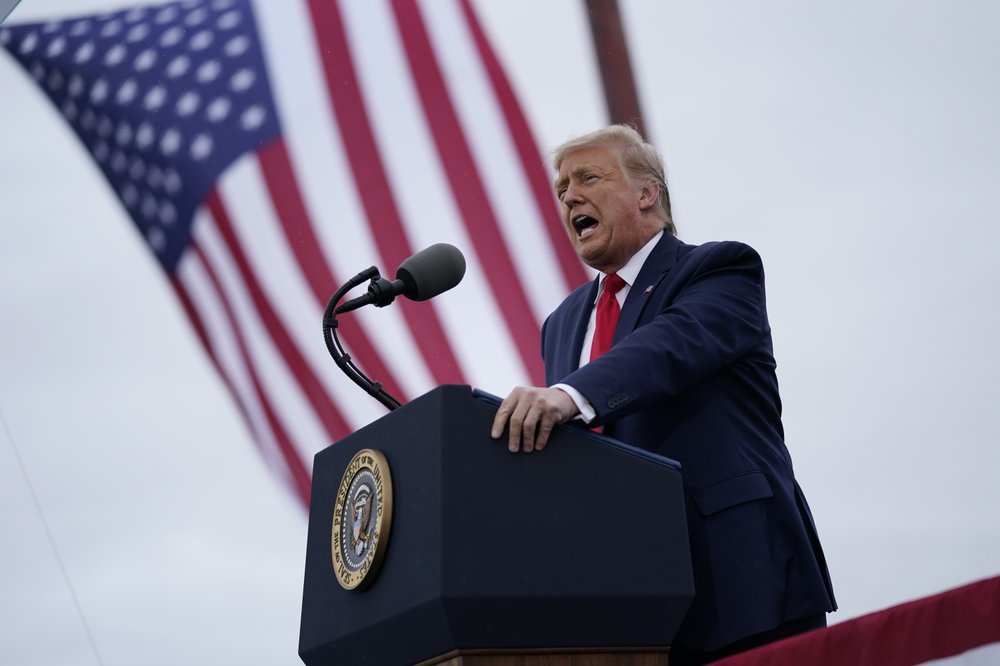 US President Donald Trump on Thursday denied lying to Americans about the severity of the coronavirus after a bombshell new book by journalist Bob Woodward revealed that he deliberately downplayed the crisis.

Trump's taped admission to Woodward that he minimized the pandemic in public, while being aware from the start about the unique danger presented by Covid-19, has set off alarm bells less than eight weeks before election day.

Asked at a hastily organized White House press conference "Why did you lie to the American people?" Trump responded: "I didn't lie."

The Republican, who is down in the polls against Democrat Joe Biden and faces overwhelming disapproval from Americans on his handling of the coronavirus crisis, insisted that he'd softened the dangers in public so as to preserve calm.

"I don't want to jump up and down and start screaming 'Death! Death!'" he argued.

But Trump has been thrown onto the defense after multiple excerpts and recordings from Woodward's book "Rage" were released on Wednesday.

Following two Fox News interviews, dozens of tweets, and the press conference, Trump continued his bid to get his election message back on track by holding a rally with supporters in Freeland, Michigan.

He told the excited crowd that his approach to Covid-19 matched that of the British government in World War II with its famous "Keep calm and carry on" morale-boosting posters.

Apparently meaning Woodward, he referred in his speech to "this whack job that wrote the book."

"Rage" is filled with startling episodes, including the assessment by Trump's then director of national intelligence, the respected Dan Coats, that the president "doesn't know the difference between the truth and a lie."

But the segments in which Trump candidly discusses the coronavirus pandemic -- responsible for killing almost 200,000 Americans -- are getting the most attention.

Despite openly describing to Woodward the dangerous characteristics of the then unknown virus, including the fact that it is transmitted by air, Trump said "I wanted to always play it down."

Trump went on to explain to Woodward that he wanted to avoid causing panic. However, his acknowledgement that he failed to tell the country the unvarnished truth prompted outrage.

Critics quickly resurrected his multiple statements from the early stages of the pandemic in which he told the public that it was no worse than a regular flu and breezily predicted it would "disappear" in a short period.

"He knew how deadly it was," Biden said Wednesday.

"He lied to the American people. He knowingly and willingly lied about the threat it posed to the country for months."

But shoot the messenger won't work in the case of "Rage." The revelations rely mostly on Trump himself and Woodward -- famous for bringing down Richard Nixon in the Watergate scandal -- has published recordings.

In one dig at Woodward on Thursday, Trump tweeted that if the legendary reporter thought that the quotes were "so bad or dangerous, why didn't he immediately report them in an effort to save lives?"

"Because he knew they were good and proper answers. Calm, no panic!" Trump argued.

Quite why Trump would grant Woodward so much access in an election year, however, is a question many in Washington are asking. The reporter got 18 interviews with the president and was entirely open about them being put on tape.

"I did it out of curiosity," was Trump's explanation Thursday.

According to White House press secretary Kayleigh McEnany, Trump went ahead "because he is the most transparent president in history."

Trump, who has a lifetime experience in salesmanship and performing on television, has indeed set a new record for his unprecedented number of press conferences and impromptu question-and-answer sessions.

But the performances often leave his own staff scrambling in damage limitation mode, like when he mused at a press conference about the possible benefits of injecting Covid-19 patients with bleach.

In the final run before November 3 election day, aides and allies are again gritting their teeth.

"Honestly, (Woodward's) access to the White House is probably something that I would not have recommended had I been in the chief of staff role early on," Trump's current chief of staff, Mark Meadows, told Fox News.

Karl Rove, the Republican campaign mastermind in the George W. Bush era, had this warning for the incumbent: "If the president isn't focused... the occupant of the Oval Office is set to change."