WORLD Trump discharged from hospital, doctor says he may not be 'out of the woods'

Trump discharged from hospital, doctor says he may not be 'out of the woods' 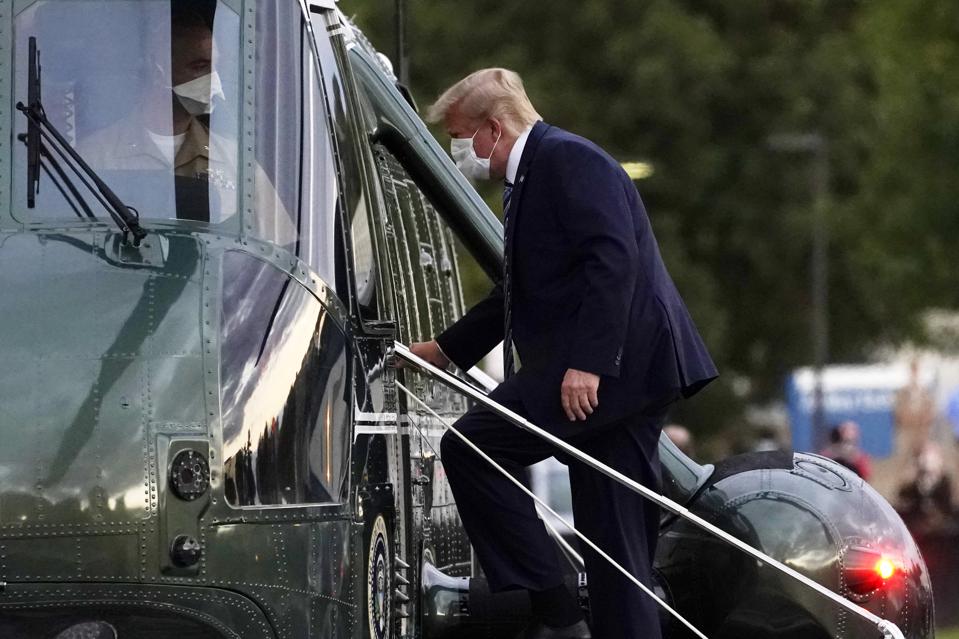 WASHINGTON, Oct. 5 (Xinhua) -- U.S. President Donald Trump, still recovering from COVID-19, left hospital on Monday evening though one of his doctors said he "may not be entirely out of the woods yet."

Dressed in a dark suit and wearing a mask while giving thumbs up to reporters, Trump walked out of a building at Walter Reed National Military Medical Center in Bethesda, Maryland for a Marine One trip back to the White House.

A group of his supporters gathering outside Walter Reed waved to the presidential helicopter as it lifted off.

In a tweet posted before the departure, Trump, who is seeking a second term and trailing his Democratic challenger, former U.S. Vice President Joe Biden, in national polls, said that he "will be back on the Campaign Trail soon."

Upon returning to the White House, Trump walked up the steps to the Truman Balcony, which overlooks the South Lawn, where he took off his mask and offered a salute to Marine One before going inside.

White House physician Sean Conley told reporters earlier that Trump "has continued to improve" over the past 24 hours and "met or exceeded all standard hospital discharge criteria" but also acknowledged that the president "may not be entirely out of the woods yet."

"The team and I agree that all his evaluations, and most importantly, his clinical status support his return home where he'll be surrounded by world class medical care 24/7," the doctor said.

Trump was first diagnosed with COVID-19 on Oct. 1 and flown to Walter Reed a day later, where he used Remdesivir, a COVID-19 drug made by the U.S. biopharmaceutical company Gilead Sciences, as a treatment.

"Our plan is to give him the fourth treatment of Remdesivir this evening before he goes back to the White House, and we've made arrangements to deliver the fifth and final dose of his treatment course at the White House tomorrow evening," Brian Garibaldi, a member of Trump's medical team and lung specialist, disclosed on Monday.

Trump also received a dose of an experimental antibody cocktail being developed by U.S. drug maker Regeneron and was given a dose of dexamethasone, an anti-inflammatory steroid typically used by some severely ill COVID-19 patients.

His return to the White House came hours after his press secretary Kayleigh McEnany revealed that she has tested positive for COVID-19. More than a dozen individuals who have been on the White House grounds or in contact with the president have also contracted the virus.