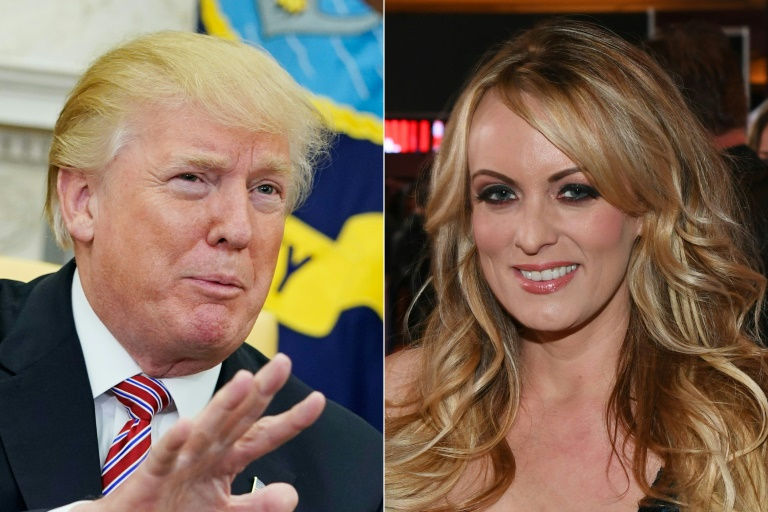 The disclosure caps a series of contradictory statements from Trump and his representatives on the scandal swirling around lawyer Michael Cohen -- which has widened to ensnare major corporations and a Russian oligarch.

The documents released Wednesday by a US government ethics body do not specify the reason for the payments to Cohen, who paid $130,000 to adult film actress Stormy Daniels in the run-up to the 2016 election.

Daniels, whose real name is Stephanie Clifford, claims she had a tryst with Trump in 2006 while he was married. The president denies the affair, and initially denied all knowledge of the payment, which Cohen has acknowledged was intended to stop her from going public with the allegations.

Trump's claim began to unravel early this month, however, after Rudy Giuliani, a new member of the president's legal team, said Trump had reimbursed Cohen for the sum paid to Daniels -- and the president himself subsequently acknowledged the repayment.

A footnote to disclosures submitted Tuesday to the Office of Government Ethics said Cohen had incurred "expenses" on Trump's behalf in 2016 of between $100,001 and $250,000.

Trump's filing states that the president was not required to disclose Cohen's expenses, but was doing so in the interest of transparency.

But an accompanying letter to the Justice Department from David Apol, the acting head of the Office of Government Ethics, said the payments by Cohen were indeed required to be reported, as also argued by an outside government ethics group which had lodged official complaints in March.

Apol told Deputy Attorney General Rod Rosenstein that he was providing both Trump's 2017 and 2018 disclosures, as potentially "relevant to any inquiry" the Justice Department may be pursuing into the president's filings from last year.

Stormy Daniels is suing to be released from the hush agreement reached with Cohen, claiming it is invalid because Trump never signed it.

The president's lawyer, meanwhile, finds himself under investigation by federal prosecutors who seized reams of evidence in raids on his home and office last month but have not revealed what crimes he may have committed.

The Washington Post reported that Cohen is under investigation for possible bank fraud, wire fraud and campaign finance violations.

Giuliani, said Wednesday that the Cohen case is of no concern.

"Not a lick. We're completely uninvolved in that. We've gotten assurances that we're not involved in it," Giuliani told "The Ingraham Angle" on Fox News.

Cohen also stands accused of seeking to cash in on his proximity to the president, after it emerged he received millions of dollars from a Russian oligarch and major corporations seeking access to the administration.

Swiss pharmaceutical giant Novartis Wednesday announced the retirement of its top legal expert over the $1.2 million in payments to Cohen, while AT&T has said it made a "big mistake" by paying the lawyer some $600,000.

The disclosure of Trump's payments to his lawyer came the same day a Senate intelligence panel released thousands of pages of testimony from its probe into a meeting between the president's eldest son, Donald Trump Jr, and a Russian lawyer who offered to provide damaging information about Hillary Clinton.

In his testimony released Wednesday, Trump Jr said he did not tell his father ahead of time about the 2016 meeting at Trump Tower, also attended by the Republican candidate's campaign manager Paul Manafort and son-in-law Jared Kushner.

The newly-released financial documents also offered a glimpse of the performance of two of Trump's flagship hotels: the Trump International Hotel in Washington -- which has attracted crowds of lobbyists, lawmakers and foreign governments with business before the federal government, and Trump's Mar-a-Lago resort in Florida, dubbed the "Winter White House."

A prior disclosure made last year covered a 16-month period and showed $37.3 million in revenues for Mar-a-Lago.

The report also showed Trump earned between $230,000 and $1.1 million in capital gains income on stock in iPhone maker Apple, Caterpillar, Microsoft and Pepsico.