Trump doubles down on tough immigration policies as midterm nears

WASHINGTON, Nov. 1 (Xinhua) - US President Donald Trump on Thursday vowed to step up efforts to crack down on illegal immigrants.

"We will not allow our generosity to be abused by those who would break our laws, defy our rules, violate our borders, break into our country illegally," Trump said in a televised speech at the White House. 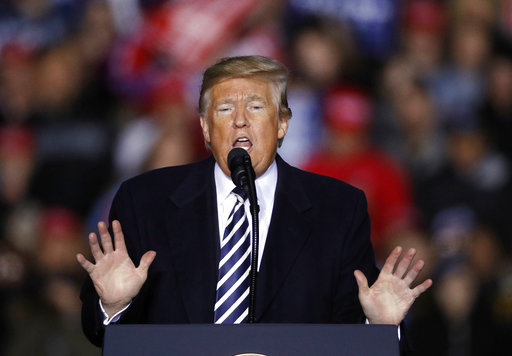 Trump said he will sign a "quite comprehensive" executive order "sometime next week" to address illegal immigration, but did not specify what measures may be included in the package.

It is also unclear whether Trump will take action before or after the midterm election scheduled for Tuesday.

Trump's speech focused on an immigration caravan moving towards the US border in Mexico.

"At this very moment, large well-organized caravans of migrants are marching towards our southern border ... It's like an invasion," he said.

Trump called on those seeking asylum to accept protection offered by the Mexican government, and warned that those who try to enter the United States illegally will be arrested and tried.

"We have thousands of tents ... We're going to hold them right there. We're not letting them into our country," he said.

Trump said he hopes US military massing on the southern border will not resort to force in face of the incoming immigrants, but threatened that anyone throwing rocks at U.S. law enforcement or military personnel will be regarded as using firearms.

With only days left before the midterm elections, Trump has made repeated tough remarks against illegal immigration, which polls show is among the most important issues for Republican voters.

Trump on Tuesday suggested he would move to end "birthright citizenship," a privilege long considered to be protected by the 14th amendment of the US Constitution. On early Thursday, he tweeted a controversial video ad depicting an illegal immigrant who killed two U.S. policeman.

Trump refuted criticism that he was "fear mongering" by underscoring the negative impact of illegal immigrants in the United States, saying that immigration is a "very big and dangerous topic."

He said that the United States will not "allow people to come into our country that don't have the well-being of our country in mind."