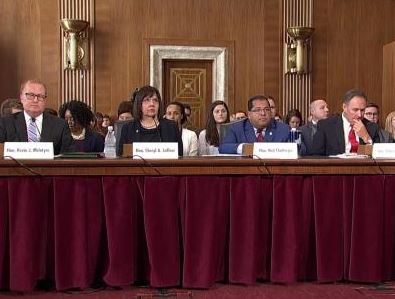 Bernard McNamee’s nomination to a top federal energy board cleared a Senate committee on Tuesday even as a video showed him declaring that renewable energy “screws up” the nation’s electrical grid.

The Senate Energy and Natural Resources Committee voted 13-10 to approve McNamee’s nomination to the Federal Energy Regulatory Commission and send it to the full Senate. West Virginia Sen. Joe Manchin was the only Democrat joining Republicans in approving the nomination.

McNamee is an Energy Department staffer who had worked on a stalled Trump administration bailout for aging coal plants.

Opposition by Democrats and environmental groups grew after a video emerged last week of McNamee’s comments in February to the conservative Texas Public Policy Foundation.

In the video, McNamee compared renewable sources like solar and wind unfavorably to climate-changing fossil fuels when it came to powering electrical grids.

“I do expect ... he will be fuel-neutral and not a champion for one resource over another” on the energy board, Murkowski said.

Washington Democrat Sen. Maria Cantwell said McNamee’s comments showed he was “out of the mainstream” on fossil fuels despite growing concern over their impact on climate.