US President Donald Trump and European Commission chief Jean-Claude Juncker on Wednesday agreed on a plan to defuse the festering trade dispute between the two major economies.

The agreement, though short on details, means Washington will not follow through with a threat to impose tariffs on autos, which would hurt the dominant German car industry. 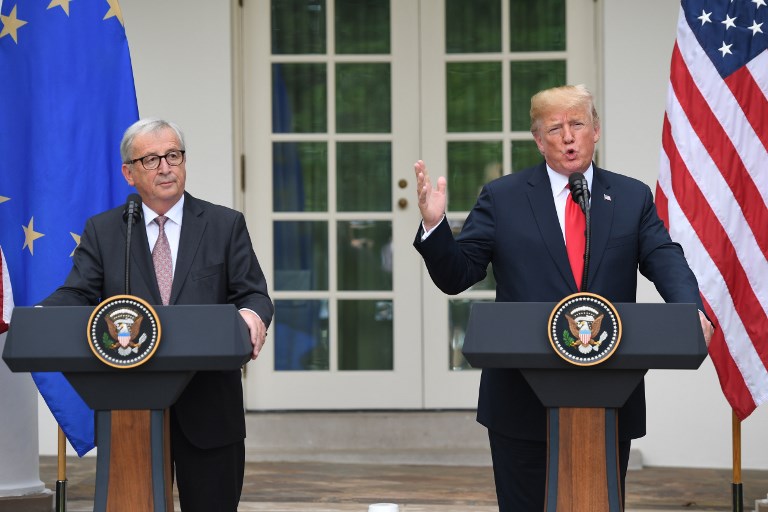 US President Donald Trump and European Commission President Jean-Claude Juncker (L) leave after making a statement in the Rose Garden of the White House in Washington, DC, on July 25, 2018. （AFP Photo)

The pair -- who met for more than two hours of talks at the White House -- also said they would work to "resolve" the existing duties on steel and aluminum imposed by Washington, which had angered key allies including the European Union.

"We want to further strengthen this trade relationship to the benefit of all American and European citizens," Trump said in a statement delivered from the White House Rose Garden.

The outcome seemed a victory for Trump, who had assured supporters that his confrontational trade strategy would bear fruit, and who appears to have conceded little in the talks with the EU.

The leaders agreed to "launch a new phase" in the relationship and "to work together towards zero tariffs, zero non-tariff barriers, and zero subsidies on non-auto industrial goods," Trump said.

In addition, the EU has made a commitment to buy US soybeans and natural gas.

Juncker, who had been somewhat defiant ahead of the meeting, said afterwards, "I had the intention to make a deal today. And we made a deal today."

However, the deal was contingent "on the understanding that as long as we are negotiating... we will hold off further tariffs, and we will reassess existing tariffs on steel and aluminum."

While EU officials had threatened immediate retaliation to any auto tariffs, and said they would not negotiate with Washington under duress, they seem to have decided to appease the irascible US leader.

"Congrats to @JunckerEU, @realDonaldTrump: Breakthrough achieved that can avoid trade war & save millions of jobs! Great for global economy!" German Economy Minister Peter Altmaier said on Twitter after the talks.

Trump also won a commitment to work together to reform the World Trade Organization to address some of his complaints, the behavior of state-owned enterprises, and overcapacity in steel. He has long complained that the WTO has been unfair to the United States.

The US and EU account for about $1 trillion in trans-Atlantic trade, and tensions spiked leading up to Wednesday's high-stakes talks.

EU Trade Commissioner Cecilia Malmstrom, who accompanied Juncker, hailed the agreement and said on Twitter that she "will be working hard to take this work forward the coming months."

The details and mechanisms as well as the timing remain to be worked out, and the impact may not been seen for some time.

Juncker said the EU already imports 35 percent of its natural gas from US producers, but will work to buy more.

While the US president can claim his aggressive approach is working, consumers, farmers and businesses are feeling the pain from the retaliatory measures imposed to counter the raft of US tariffs on steel, aluminum, and tens of billions of dollars in products from China put in place in recent weeks.

Brussels retaliated against the metal tariffs, imposing punitive duties on more than $3 billion of US goods, including blue jeans, bourbon and motorcycles, as well as orange juice, rice and corn.

Canada, Mexico, and China -- the main target of Trump's trade offensive -- also hit back with steep duties on US goods, and have filed complaints against Washington at the WTO.

While the US claims the retaliation was "illegal," the Trump administration has acknowledged it is doing damage to American farmers, and announced Tuesday it will provide up to $12 billion in aid to farmers hurt by trade tariffs.

WTO Director-General Roberto Azevedo said Wednesday he is hoping to "stop this trend" of growing restrictions on trade.

A new WTO report showed global trade covered by measures to restrict imports reached $84.5 billion in May as compared to $79 billion in October, with 75 new actions imposed in that time period.

"We are heading in the wrong direction, and we seem to be speeding up. Growth, jobs and recovery are at stake," Azevedo warned.