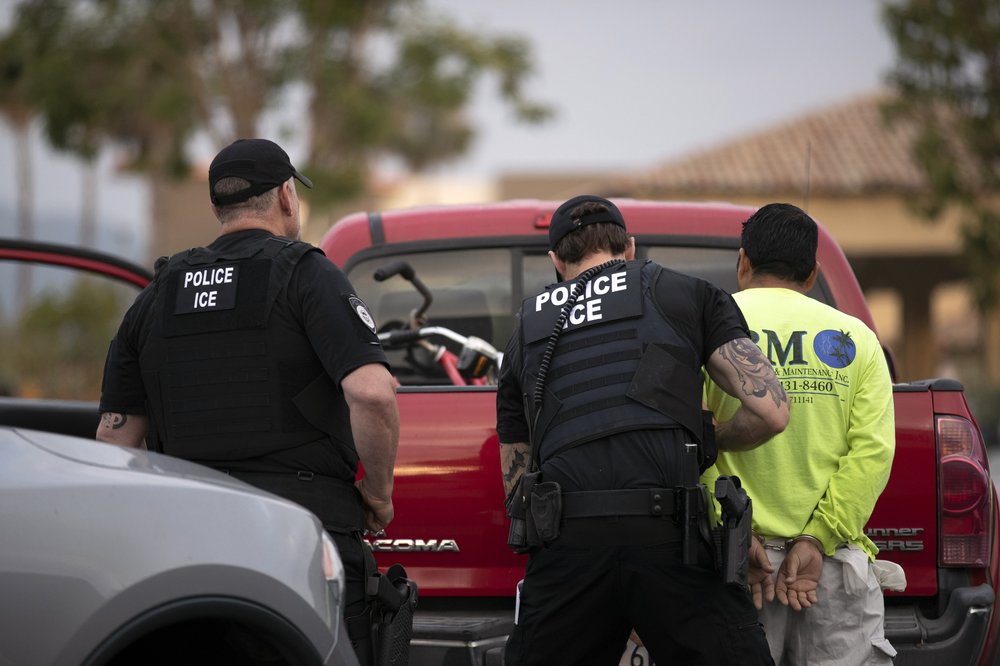 In this July 8, 2019 file photo, US Immigration and Customs Enforcement (ICE) officers detain a man during an operation in Escondido, Calif. (Photo: AP)

The Trump administration announced Monday that it will vastly expand the authority of immigration officers to deport migrants without allowing them to appear before judges, its second major policy shift on immigration in eight days.

Starting Tuesday, fast-track deportations can apply to anyone in the country illegally for less than two years. Previously, those deportations were largely limited to people arrested almost immediately after crossing the Mexican border.

Kevin McAleenan, the acting Homeland Security secretary, portrayed the nationwide extension of “expedited removal” authority as another Trump administration effort to address an “ongoing crisis on the southern border” by freeing up beds in detention facilities and reducing a backlog of more than 900,000 cases in immigration courts.

US authorities do not have space to detain “the vast majority” of people arrested on the Mexican border, leading to the release of hundreds of thousands with notices to appear in court, McAleenan said in the policy directive to be published Tuesday in the Federal Register. He said Homeland Security officials with the new deportation power will deport migrants in the country illegally more quickly than the Justice Department’s immigration courts, where cases can take years to resolve.

The agency “expects that the full use of expedited removal statutory authority will strengthen national security, diminish the number of illegal entries, and otherwise ensure the prompt removal of aliens apprehended in the United States,” McAleenan said.

The American Civil Liberties Union and American Immigration Council said they would sue to block the policy.

“Under this unlawful plan, immigrants who have lived here for years would be deported with less due process than people get in traffic court,” said Omar Jawdat, director of the ACLU’s Immigrants’ Rights Project.

“Expedited removal” gives enforcement agencies broad authority to deport people without allowing them to appear before an immigration judge with limited exceptions, including if they express fear of returning home and pass an initial screening interview for asylum.

The powers were created under a 1996 law but went largely unnoticed until 2004, when Homeland Security said it would be enforced for people who are arrested within two weeks of entering the US by land and caught within 100 miles (160 kilometers) of the border.

The fast-track deportations have become a major piece of US immigration enforcement over the last decade. Critics have said it grants too much power to immigration agents and US Customs and Border Protection officials.

The potential impact of the new measure is difficult to predict. McAleenan said 20,570 people arrested in the nation’s interior from October 2017 through September 2018 year had been in the US less than two years, which would make them eligible for fast-track deportation under the new rule. Critics said the new measure’s impact could be more far-reaching because many in the US for longer than two years may be unable to prove they have been in the country for so long.

“Expanding the fast-track procedure to apply anywhere in the US is a recipe for ripping thousands more families apart and devastating communities,” said Grace Meng, Human Rights Watch’s acting deputy US director. “This is a massive and dangerous change.”

The administration said the expanded authority will likely mean less time for migrants in detention while cases wind their way through immigration court. The average stay in immigration detention for people in fast-track removal was 11.4 days from October 2017 through September 2018, compared to 51.5 days for people arrested in the nation’s interior.

The announcement was the second major policy shift in eight days following an unprecedented surge of families from Central America’s Northern Triangle of Guatemala, Honduras and El Salvador.

Last week, the administration said it will deny asylum to anyone who passes through other countries en route to the US without seeking protection in at least one of those countries. Two lawsuits were filed challenging the move. A judge in Washington, D.C., heard arguments Monday on whether to block the policy. Judge Timothy Kelly said he would “endeavor to rule on this as quickly as I can.”

A judge in San Francisco set a hearing for Wednesday in a similar lawsuit.