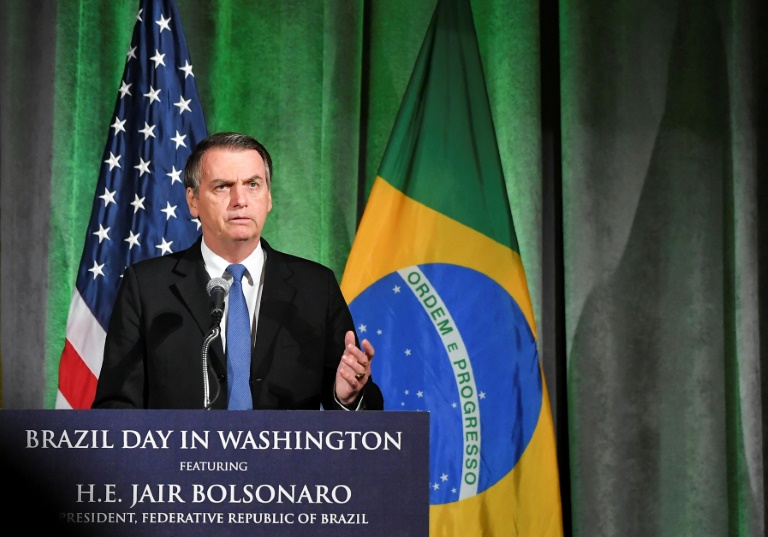 Brazil's President Jair Bolsonaro speaks during a discussion on US-Brazil relations at the US Chamber of Commerce in Washington, ahead of his meeting with President Donald Trump (Photo: AFP)

President Donald Trump was hosting Brazilian President Jair Bolsonaro, the so-called Trump of the Tropics, on Tuesday to launch what officials tout as a new alliance between their right-wing governments.

"This is a potentially historic opportunity to redirect relations between our two countries, the two largest democracies in the western hemisphere," Trump's national security advisor John Bolton told reporters.

The White House gathering brings together two men who were surprise election winners, sweeping to power on a promise to end politics as usual in their giant countries.

Like Trump, Bolsonaro is a populist who delights in shocking leftist opponents and, like the US president, stands accused of darker far-right tendencies.

Since his 2018 election, Bolsonaro has worn his nickname "Trump of the Tropics" with pride. Such are the similarities that Bolton now jokes Trump, elected in 2016, should be dubbed "the Bolsonaro of North America."

Washington had strained relations with Brazil's long string of leftist governments but the rise of Bolsonaro, a former paratrooper who talks enthusiastically of combating socialism and killing street criminals, has opened a new door for the Trump administration.

"It's the first time in a long time that a Brazilian president who is not anti-American comes to Washington," Bolsonaro tweeted.

A senior Trump administration official told reporters Monday that a new "North-South axis" is on the table.

Bolsonaro's election "broke all the historic taboos," said the official, asking not to be identified.

A Trump-Bolsonaro bonding matters for the US-led campaign to pressure Venezuela's hard-left President Nicolas Maduro from power, as well as pushing back against growing Chinese economic influence across South America.

It could also have large-scale implications for the future of efforts to slow or reverse global warming: Brazil is home to much of the threatened Amazon rainforest and Bolsonaro, like Trump, is a climate change skeptic.

Trump has withdrawn the United States from the Paris Climate Agreement, an international deal on cutting carbon emissions. Bolsonaro is toying with following suit.

In an interview with Fox News -- Trump's go-to television channel -- Bolsonaro said he has "a great deal" in common with his firebrand US counterpart.

"I have always admired him. I will not deny that. I have been highly criticized because of this but I will not of course deny what I do think. I am not a chameleon."

Bolsonaro will hold private talks in the Oval Office with Trump before they appear at a joint press conference in the Rose Garden.

Concrete items under discussion include Brazil's push to get Washington's backing for entry into the Organization for Economic Cooperation and Development, a group of rich democracies.

On Monday, Bolsonaro signed an agreement with US companies on technical safeguards to allow commercial satellite launches from Brazil's Alcantara base.

Brazil is also seeking closer military relations with the United States through what's called Major Non-NATO ally status, which gives preferential access to the purchase of US military equipment and technology.

The Brazilian leader, who spent years as a fringe congressman before his dramatic elevation to the nation's highest office, is clearly delighted with the reception he's getting.

It was a sign of US confidence in Bolsonaro that he wants his new friends to know he'll repay.

"Brazil and the United States together throw fear into defenders of backwardness and tyranny around the world," Bolsonaro tweeted ahead of his meeting with Trump.