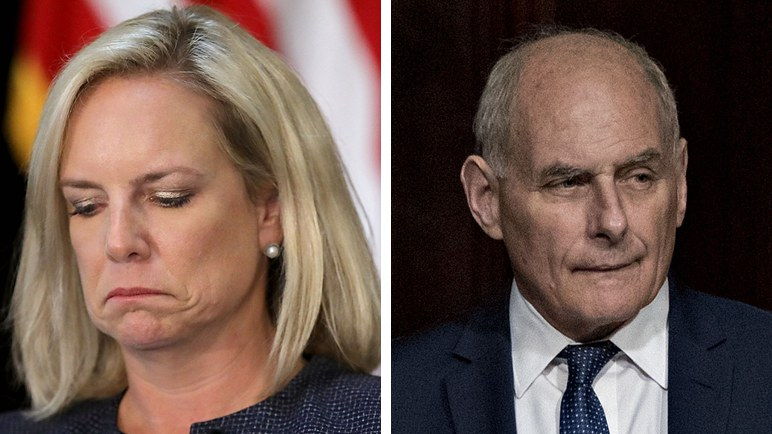 US President Donald Trump is expected to remove Department of Homeland Security chief Kirstjen Nielsen and is considering replacing chief of staff John Kelly in another shakeup of his administration, a source close to the White House said. Meanwhile, first lady Melania Trump on Tuesday also openly called for the ouster of one of the top officials on the National Security Council in a blunt statement.

Trump has been mulling removing Nielsen, a Kelly protege who became the secretary at Homeland Security when he left the job to become Trump's chief of staff, for a number of weeks, the source said.

The source cautioned Trump could still change his mind on the matter, but said he has grown weary of her in his push to harden the US border with Mexico.

Trump has not decided on a candidate to replace Nielsen, the Wall Street Journal reported.

"The Secretary is honored to lead the men and women of DHS and is committed to implementing the President's security-focused agenda to protect Americans from all threats and will continue to do so," said Tyler Houlton, a Department of Homeland Security spokesman, in response to an ABC News report about the possible staff changes.

Kelly, a retired Marine Corps general, has sought to bring more stability to the White House operation under the unpredictable Trump.

During his time as chief of staff, he and the president have had a rocky relationship, according to various news reports and Bob Woodward's best-selling book “Fear: Trump in the White House.”

If they leave, Kelly and Nielsen would join a long list of people who have been fired by Trump or resigned since he took office in January 2017. That list includes former secretary of state Rex Tillerson and former attorney general Jeff Sessions, who was removed by the president last week.

Another administration official, Mira Ricardel, a foreign policy hard-liner who had been serving as a deputy to the national security adviser, John Bolton, was also expected to be dismissed due to first lady Melania Trump's pressure.

Melania Trump's office took the extraordinary step of issuing a statement saying that Ricardel should be ousted. While first ladies historically have been known to pressure their husbands over official business, they do not typically issue statements about it.

“It is the position of the Office of the First Lady that she no longer deserves the honor of serving in this White House,” Stephanie Grisham, the first lady's spokeswoman, said in a terse statement.

She gave no reason for why the first lady wanted Ricardel out but several officials said it was related to Mrs. Trump's trip to Africa in October as Ricardel had disparaged two members of Mrs. Trump's staff.

Ricardel also is said to have tangled with Defense Secretary Jim Mattis on issues of policy and Pentagon personnel.