Trump faces complaints that new Iran sanctions are too weak 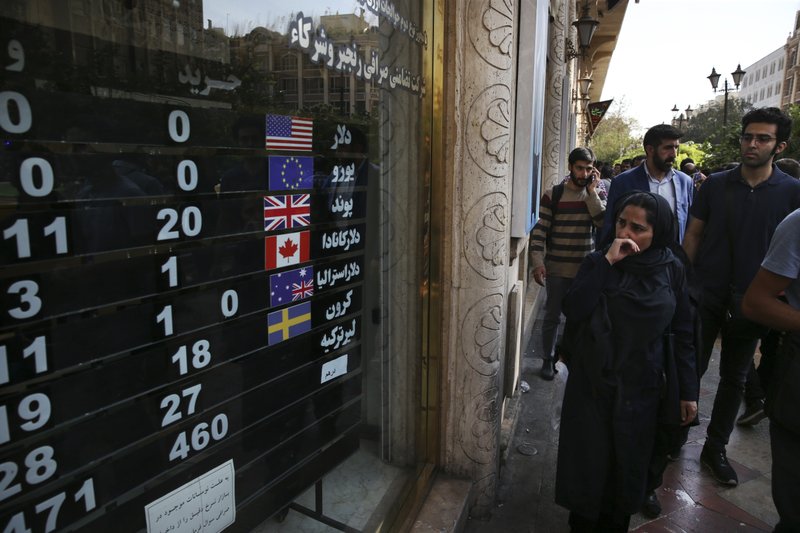 A battle is brewing between the Trump administration and some of the president’s biggest supporters in Congress who are concerned that sanctions to be re-imposed on Iran early next month won’t be tough enough.

As President Donald Trump prepares to re-impose a second batch of Iran sanctions that had been eased under the 2015 nuclear deal, conservative lawmakers and outside advisers have become worried that the administration may break a promise to exert “maximum pressure” on Iran. They are angered by suggestions that measures to be announced Nov. 5 won’t include a provision cutting Iran off from a key component of the global financial system.

The self-described Iran hawks are concerned enough that they have drafted legislation that would require the administration to demand that Iran be suspended from the international bank transfer system known as SWIFT.

“The president asked for maximum pressure, not semi-maximum pressure,” said Richard Goldberg, a former aide to a Republican senator and senior adviser to the Foundation for the Defense of Democracies, a group that supports punishing Iran with sanctions. “Maximum pressure includes disconnecting Iranian banks from SWIFT.”

Trump pledged Thursday to do whatever it takes to pressure Iran to halt what he refers to as its “malign conduct” such as nuclear and missile development and support for terrorism and groups that destabilize the Middle East.

“On Nov. 5th, all US sanctions against Iran lifted by the nuclear deal will be back in full force,” he told a gathering at the White House to commemorate the 35th anniversary of the 1983 attack on the Marine Corps barracks in Beirut, Lebanon, which is blamed on Iranian-backed extremists. “And they will be followed up with even more sanctions to address the full range of Iran’s malign conduct. We will not allow the world’s leading sponsor of terror to develop the world’s deadliest weapons. Will not happen.”

The Nov. 5 sanctions cover Iran’s banking and energy sectors and will reinstate penalties for countries and companies in Europe, Asia and elsewhere that do not halt Iranian oil imports. They could also include measures to force Iran out of SWIFT.

Despite Trump’s tough stance, the hawks are worried about recent comments from Treasury Secretary Stephen Mnuchin and his staff that suggest Iran will be able to stay connected to SWIFT. They are also concerned the administration will back down on its stated zero-tolerance policy for Iranian oil purchases by granting waivers to certain countries and companies that do not fully stop buying it.

Iran deal supporters, like the other parties to the agreement, argue that pushing Iran out of SWIFT, the Belgium-based Society for Worldwide Interbank Financial Telecommunication, will lead to the creation of alternate mechanisms that could supplant it as the leading global institution for financial institutions to send and receive information about banking transactions. They also say expulsion will make it harder for Iran to conduct transactions, such as humanitarian purchases, that will still be allowed after Nov. 5.

Allowing Iran to remain in SWIFT would make it easier for Tehran to import humanitarian goods like medicine permitted under US sanctions and “would help the United States make clear that its critique of Iran is directed at the regime, not the people of Iran,” said Elizabeth Rosenberg, a former Treasury official now with the Center for a New American Security. She added, though, that disconnection would be a “fast track” to isolation.

The debate underscores the challenges the administration faces as it tries to isolate Iran without the full backing of other world powers who remain supportive of the nuclear deal.

Although the hawks had been pleased by Trump’s decision to withdraw from the nuclear deal in May and cheered the August re-imposition of an initial set of sanctions, they are now seething that Treasury may opt to use existing safeguards to isolate Iran instead of hitting SWIFT members with sanctions if they don’t disconnect Tehran.

Treasury has been coy about its intentions, saying only that Mnuchin and the agency have led “an intense economic pressure campaign against Iran as part of this administration’s comprehensive strategy to address the totality of Iran’s malign and destabilizing activity, with much more to come.”

“Treasury has made it very clear that we will continue to cut off bad Iranian actors, including designated banks, from accessing the international financial system in a number of different ways,” it said. “We will also take action against those attempting to conduct prohibited transactions with sanctioned Iranian entities regardless of the mechanisms used.”

That less-than-categorical position has rallied the hawks around the legislation prepared by Sen. Ted Cruz, R-Texas, that would require the administration to impose sanctions on SWIFT members, including some US banks, should it not suspend Iran on its own.

Federal law currently gives the administration authority to act against Iran’s central bank and other banks covered by terrorism and money laundering sanctions. Cruz’s legislation, however, would authorize the administration to hit all of Iran’s banks with sanctions and require it to act against SWIFT if it connects any Iranian bank under sanctions to its system, according to a copy seen by the AP.

In August, Cruz led a group of 16 GOP senators, including Trump Republican allies Tom Cotton of Arkansas, Marco Rubio of Florida, Thom Tillis of North Carolina and John Barrasso of Wyoming, in demanding action against SWIFT if Iran is not suspended. Congressional aides say they believe support for his proposed legislation will be strong. “The administration’s maximum pressure campaign will not succeed if the Islamic Republic remains connected to SWIFT,” the senators told Mnuchin.