US President Donald Trump said Monday that he had fired the chair of the Tennessee Valley Authority, criticizing the federally owned corporation for hiring foreign workers. 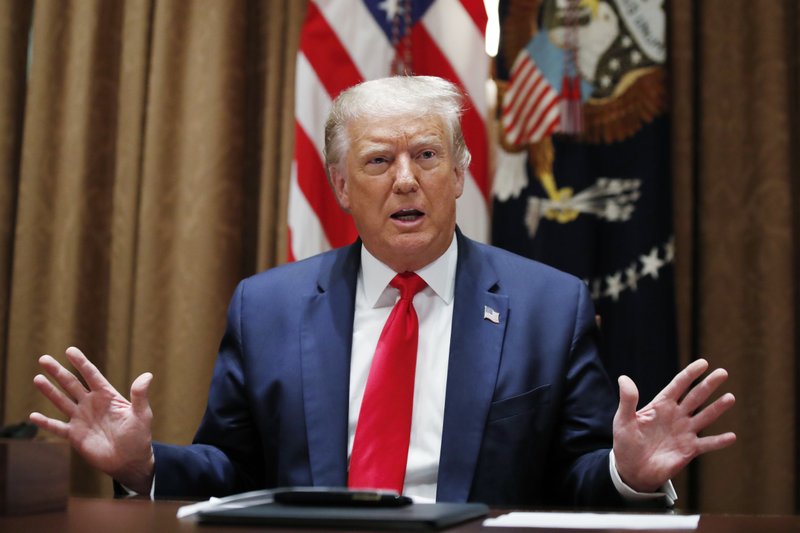 US President Donald Trump speaks during a meeting with U.S. tech workers, before signing an Executive Order on hiring American workers, in the Cabinet Room of the White House, Monday, Aug. 3, 2020, in Washington. (Photo: AP)

Trump told reporters at the White House that he was formally removing chair Skip Thompson and another member of the board, and he threatened to remove other board members if they continued to hire foreign labor. Thompson was appointed to the post by Trump.

The TVA was created in 1933 to provide flood control, electricity generation, fertilizer manufacturing and economic development to the Tennessee Valley, a region that was hard hit by the Great Depression. The region covers most of Tennessee and parts of Alabama, Mississippi and Kentucky as well as small sections of Georgia, North Carolina and Virginia.

Trump also urged the TVA board to immediately hire a new chief executive officer who “puts the interests of Americans first." According to the president, the current CEO, Jeff Lyash, earned $8 million a year.

“The new CEO must be paid no more than $500,000 a year,” said Trump, who lacks the authority to remove the CEO. “We want the TVA to take action on this immediately. ... Let this serve as a warning to any federally appointed board: If you betray American workers, you will hear two words: ‘You’re fired.’”

Trump said the authority was replacing many of its in-house technology workers with contractors who rely heavily on foreign workers under the H1-B visa program for highly skilled workers.

“All TVA employees are U.S. based citizens,” said authority public information officer Jim Hopson. “All jobs related to TVA’s Information Technology department must be performed in the U.S. by individuals who may legally work in this country.”

“As a federal corporation, TVA’s Board members serve at the pleasure of the President,” Hopson added.

As Trump was meeting with workers who would shortly be laid off by the authority, he was passed a note from chief of staff Mark Meadows that said Lyash had called the White House and was promising to address the labor concerns. Some of the attendees, who are set to see their last paycheck at the end of the month, teared up as Trump read the message.

Trump acknowledged that he was made aware of the issue after seeing a television ad that aired in prime time on Fox News and was produced by U.S. Tech Workers, a nonprofit that wants to limit visas given to foreign technology workers.

The group, led by Kevin Lynn, criticized the TVA for furloughing its own workers and replacing them with contractors using foreign workers with H-1B visas. The ad, Lynn said, had an “audience of one," aiming to persuade Trump to stop the TVA from outsourcing much of its information technology division.

Trump made the announcement as he signed an executive order to require all federal agencies to complete an internal audit to prove they are not replacing qualified American workers with people from other countries. The White House said the order will help prevent federal agencies from unfairly replacing American workers with lower cost foreign labor.

The order followed the TVA’s announcement that it would outsource 20% of its technology jobs to companies based in foreign countries. TVA’s action could cause more than 200 highly skilled American tech workers in Tennessee to lose their jobs to foreign workers hired on temporary work visas, according to the White House.

Sen. Lamar Alexander, R-Tenn., said the TVA doesn't get any taxpayer money and defended the CEO's salary, saying it is in the bottom fourth of what his counterparts earn at other big utilities.

“TVA may have shown poor judgment hiring foreign companies during a pandemic, but, on most counts, it does a very good job of producing large amounts of low-cost, reliable electricity. Residential electric rates are among the 25 percent lowest in the country, and industrial rates are among the lowest 10 percent,” Alexander said in a statement. “TVA’s debt is the lowest in 30 years, its pension fund is stronger and TVA leads the country in new nuclear power plants.”