Trump has confidence in Pruitt as White House probes his ethics 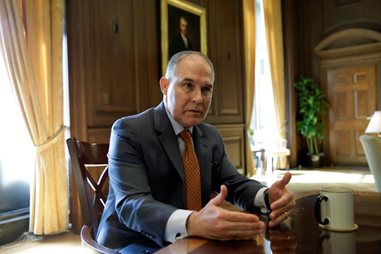 President Donald Trump said on Thursday he has confidence in Scott Pruitt, the head of the Environmental Protection Agency, even as the White House investigates whether a condo rental by Pruitt was ethical.

The EPA’s ethics office suggested there still could be questions about Pruitt’s housing arrangement.

Pruitt is facing a White House probe for renting a room in a high-end Washington neighborhood for $50 a night in a townhouse co-owned by the wife of energy industry lobbyist Steven Hart, who lobbies for companies regulated by the EPA.

Pruitt, a vocal doubter of mainstream climate change science, also is facing criticism for frequent first-class air travel, his spending on costly items in his office, including a $43,000 soundproof telephone booth, and for a trip to Morocco in which he promoted US exports of liquefied natural gas.

As Trump departed for a trip to West Virginia, he was asked if he still has confidence in Pruitt and said, “I do.”

Pruitt has been loyal to Trump’s program of slashing regulations on industry, which has helped make the president popular in coal, natural gas, and oil producing states.

“In the meantime, we’re looking into this because ... the president wants that level of accountability for everyone who works for him,” Gidley said.

While Trump appears to support Pruitt, he has been known to be fickle. Last fall, Trump said he had confidence in Secretary of State Rex Tillerson, even after their relationship was strained by differences of opinion on Iran and Russia policy. Trump fired Tillerson in March.

In late March, the EPA’s ethics office cleared Pruitt of accepting an illegal gift from a lobbyist with the condo lease, saying a number of other rooms nearby are available for rent for a similar or lower price.

But the office issued a memo, dated April 4 and seen by Reuters, that the earlier review did not consider whether Pruitt had violated other ethics rules with the lease.

Kevin Minoli, a top ethics official in the EPA’s Office of General Counsel, said in the memo that the review did not address issues such as a rule requiring officials to avoid behavior that could result in their impartiality being questioned.

“It is important to note that the federal ethics regulations regarding impartiality apply regardless of whether something involves receiving a prohibited gift,” he wrote.

In a separate statement about the memo, Minoli said it explains the ethical issues beyond the scope of the original review.

The impartiality rule requires government officials avoid doing things that could create an “appearance of favoritism in government decision-making,” according to the US Office of Government Ethics.

In the memo, first reported by CNN, Minoli also said he did not have access to enough information to determine whether Pruitt’s actual use of the townhouse was consistent with the lease.

Trump’s support for Pruitt, which he also voiced on Tuesday, comes even as US lawmakers, including three fellow Republicans, called for his resignation over the ethics questions.