WORLD Trump heads to India amid more differences than agreements

Trump heads to India amid more differences than agreements 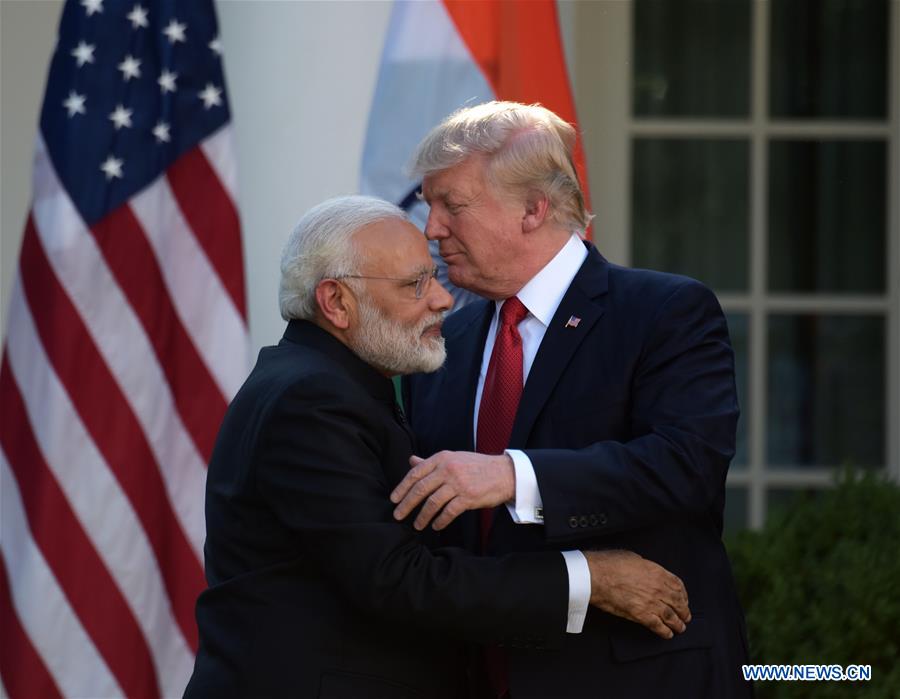 Washington (People’s Daily) – US President Donald Trump left the country Sunday afternoon for a two-day visit in India. The occasion marks Trump's first visit to the country as the US president, and will be the fourth consecutive US leader to make the trek to India.

Although the US and India intend to strengthen cooperation through this visit, it has been difficult to bridge the differences between both sides and reduce trade friction.

Traveling for 17 hours, Trump and his wife, Melania, will stop in Germany to refuel at the Ramstein military base before arriving in Ahmedabad, the hometown of Indian Prime Minister Narendra Modi.

Hundreds of thousands are expected to greet Trump when he arrives Monday for a roadshow that will end with a rally at a cricket stadium that holds over 100,000.

Trump is expected to address the stadium crowd and then afterward he will visit the Taj Mahal. Trump and Modi are scheduled to meet in New Delhi where they will hold discussions. After a full day of talks on Tuesday, the leaders will attend an evening banquet. Trump and the first lady will return to Washington on Wednesday.

Last September, Modi visited the US, and Trump’s trip to India is a return gesture. According to Reuters, consumed being re-elected in November, Trump’s travel this week will likely be one of his few foreign trips until the election.

It’s a quick two-day visit, plus the delegation is not very large. So, the outcome doesn’t appear to be too important.

Is India a US card?

Analysts have said that India has grown in importance to the US since the Cold War ended. Between Indian independence in 1947 and 1999 only three US presidents— Dwight Eisenhower, Richard Nixon, and Jimmy Carter visited India. Since former US president Bill Clinton in 2000, every US president has visited the country.

During Trump’s presidency, the US-India relationship has grown stronger. Ashley Tellis, an expert on India and Asia with the Carnegie Endowment in Washington, pointed out that India and the US have continued to make “enormous progress” on “the most important driver of the relationship”—strategic convergence.

According to the India Times, the country may become a card to help Trump balance China in Asia.

Analysts have also said in recent years that India has publicly supported navigation freedom in the Indo-Pacific region, signed two of three so-called foundational military agreements that allow closer cooperation with the US, and increased defense purchases from the US, including combat equipment like mountain artillery and attack helicopters.

During Trump’s visit, US officials expect both sides to announce a $2.6 billion Indian purchase of Seahawk naval helicopters from Lockheed Martin. They may also announce an agreement that makes it easier to share geospatial maps for military targeting.

According to the Washington Post, India has played a principal role in the US-Asia strategy. The Trump administration even renamed the regional military command to the US Indo-Pacific Command to reflect India’s central status. US strategy documents have called India a key partner to counter China’s influence.

However, according to ABC News, the word "China" likely won't appear in any official statements or agreements, but countering the rise of an ascendant China has been -- and continues to be -- a cornerstone objective in strengthening the US-Indian strategic alliance.

For NBC News, Trump’s visit will provide plenty of spectacle, but low expectations on policy. Analysts have considered there are more differences to overcome between the US and India, including trade friction,

First, India and the US are not true partners. The US sees India’s “Make in India” initiative as further protectionism, and has  increased tariffs and regulations on e-commerce.

Second, both sides have been unable to seal a modest trade agreement. Trump would like to reach a similar agreement with India to open more markets for US goods, but progress has been slow.

Meanwhile, India and the US have hit each other with retaliatory tariffs. Recently, they have engaged in intense negotiations to produce a mini-trade deal, but officials from both countries said it remains elusive.

Two of the Trump's top trade officials US Trade Representative Robert Lighthizer and Treasury Secretary Steven Mnuchin -- are not part of the presidential delegation on the trip. That means there will not even be a limited agreement.

Third, the Kashmir issue presents another obstacle. Trump has repeatedly expressed eagerness to serve as a mediator for the volatile, decades-long conflict between India and Pakistan over Kashmir. While Pakistan is also eager to accept Trump's entrance into the matter to internationalize negotiations, India has rebuffed the offer and wants  Kashmir to remain a bilateral issue.

Fourth, US officials said Trump will raise Indian religious issues during the meetings. The Modi administration has faced protests at home and criticism abroad for enacting a citizenship law that discriminates against Muslims.