WORLD Trump holding back some JFK files, releasing others

Trump holding back some JFK files, releasing others 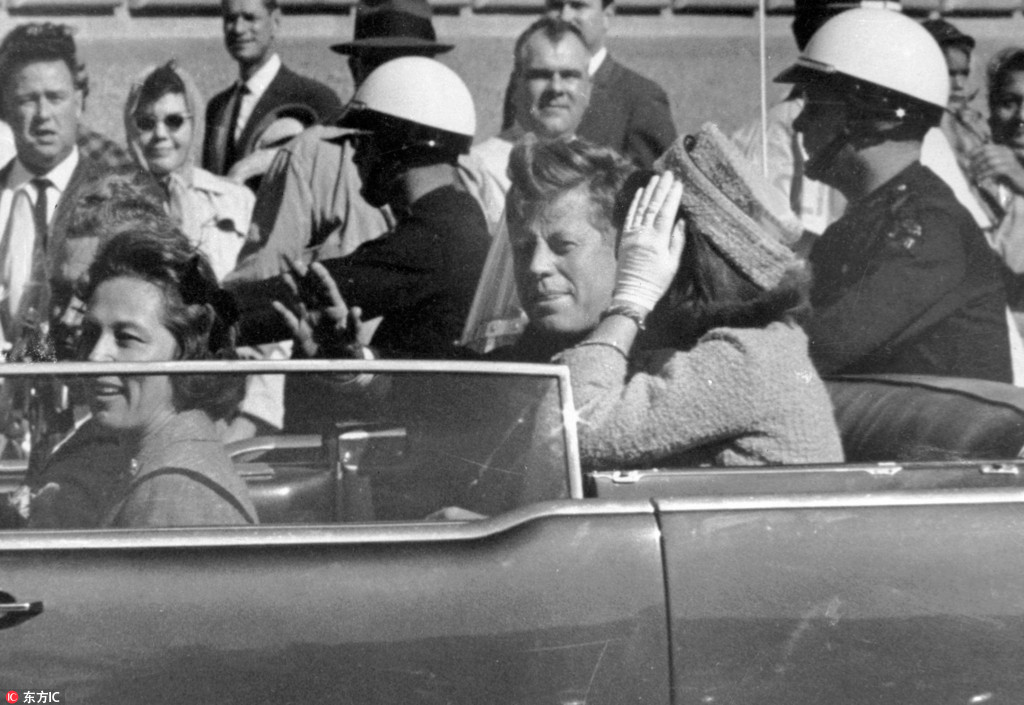 In this Nov. 22, 1963 file, President John F. Kennedy waves from his car in a motorcade in Dallas. Riding with Kennedy are First Lady Jacqueline Kennedy, right, Nellie Connally, second from left, and her husband, Texas Gov. John Connally, far left. The National Archives is due to release the John F. Kennedy assassination files on Thursday, Oct. 26, 2017.（Photo:IC）

President Donald Trump acted Thursday to block the release of hundreds of records on the John F. Kennedy assassination, bending to CIA and FBI appeals to keep those secrets.

"I have no choice," Trump said in a memo, according to White House officials. He was placing those files under a six-month review while letting 2,800 other records come out Thursday evening, racing a deadline to honor a law mandating their release.

Officials say Trump will impress upon federal agencies that JFK files should stay secret after the six-month review "only in the rarest cases."

Much of Thursday passed with nothing from the White House or National Archives except silence, leaving unclear how the government would comply with a law requiring the records to come out by the end of the day — unless Trump had been persuaded by intelligence agencies to hold some back.

White House officials said the FBI and CIA made the most requests within the government to withhold some information.

No blockbusters had been expected in the last trove of secret files regarding Kennedy's assassination Nov. 22, 1963, given a statement months ago by the Archives that it assumed the records, then under preparation, would be "tangential" to what's known about the killing.

But for historians, it's a chance to answer lingering questions, put some unfounded conspiracy theories to rest, perhaps give life to other theories — or none of that, if the material adds little to the record.

Researchers were frustrated by the uncertainty that surrounded the release for much of the day.

"The government has had 25 years_with a known end-date_to prepare #JFKfiles for release," University of Virginia historian Larry Sabato tweeted in the afternoon. "Deadline is here. Chaos."

Asked what he meant, Sabato emailed to say: "Contradictory signals were given all day. Trump's tweets led us to believe that disclosure was ready to go. Everybody outside government was ready to move quickly."

Trump had been a bit coy about the scheduled release on the eve of it, tweeting: "The long anticipated release of the #JFKFiles will take place tomorrow. So interesting!"

Experts say the publication of the last trove of evidence could help allay suspicions of a conspiracy — at least for some.

"As long as the government is withholding documents like these, it's going to fuel suspicion that there is a smoking gun out there about the Kennedy assassination," said Patrick Maney, a presidential historian at Boston College.

The collection includes more than 3,100 records — comprising hundreds of thousands of pages — that have never been seen by the public. About 30,000 documents were released previously — with redactions.

Experts said intelligence agencies pushed Trump to keep some of the remaining materials secret — the CIA didn't comment on that.

Whatever details are released, they're not expected to give a definitive answer to a question that still lingers for some: Whether anyone other than Lee Harvey Oswald was involved in the assassination.

The Warren Commission in 1964 reported that Oswald had been the lone gunman, and another congressional probe in 1979 found no evidence to support the theory that the CIA had been involved. But other interpretations, some more creative than others, have persisted.

The 1992 law mandating release of the JFK documents states that all the files "shall be publicly disclosed in full" within 25 years — that means by Thursday — unless the president certifies that "continued postponement is made necessary by an identifiable harm to the military defense; intelligence operations, law enforcement, or conduct of foreign relations."

That doesn't allow the president, for example, to hold some records back because they might be embarrassing to agencies or people.

"In any release of this size, there always are embarrassing details," said Douglas Brinkley, a professor at Rice University.

The law does not specify penalties for noncompliance, saying only that House and Senate committees are responsible for oversight of the collection.