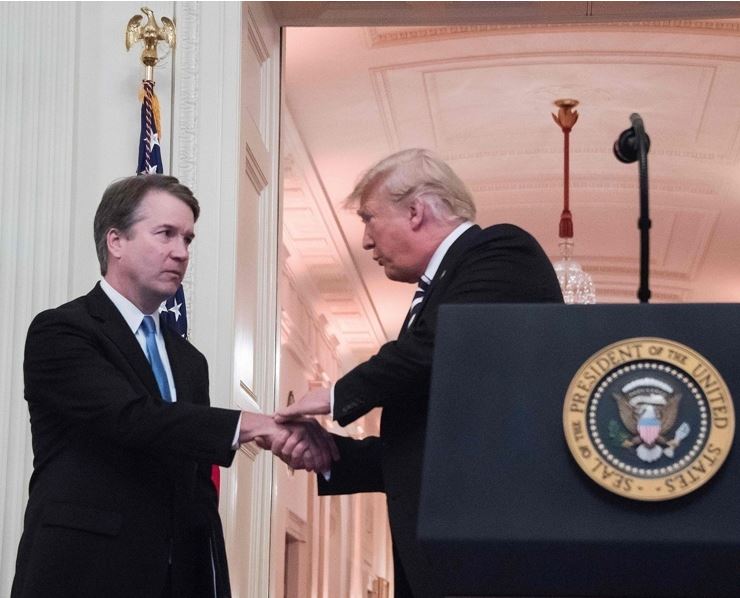 U.S. President Donald Trump (R) shakes hands with U.S. Supreme Court Justice Brett Kavanaugh (L) on the back during a ceremonial swear-in at the White House in Washington, DC, on October 8, 2018. (Photo: Xinhua/AFP)

WASHINGTON, Oct. 8 (Xinhua) -- U.S. President Donald Trump on Monday night hosted a ceremonial swearing-in of Supreme Court Justice Brett Kavanaugh in the White House, using the chance to apologize for the "pain and suffering" his nominee endured during the Senate confirmation process.

"What happened to the Kavanaugh family violates every notion of fairness, decency and due process," Trump said at the ceremony, claiming Kavanaugh had been "proven innocent."

In his following speech, Kavanaugh promised to be "an independent and impartial justice."

"The Senate confirmation process was contentious and emotional," Kavanaugh said. "That process is over. My focus now is to be the best justice I can be."

"The Supreme Court is an institution of law. It is not a partisan or political institution, and the justices do not sit on opposite sides of the aisle," the justice said.

However, according to a new poll released earlier on Monday, American voters remain sharply divided over his confirmation.

Fifty-one percent of American voters oppose Kavanaugh's confirmation to the Supreme Court, while 41 percent say they back him, according to the CNN/SSRS poll.

The poll found that, among Democrats, 63 percent opposed Kavanaugh's nomination in early September, and that has risen to 91 percent during the final days of his confirmation. Among Republicans, 74 percent backed him in September and 89 percent do so now.

Overall, 52 percent of Americans say they believe the women accusing Kavanaugh of sexual misconduct, while 38 percent said they believed the judge more than the accusers.

The CNN poll was conducted between Oct. 4 and 7 among a random national sample of 1,009 adults, with a margin of sampling error of 3.8 percentage points.