The death toll from the coronavirus pandemic in the United States moved past 5,300 on Thursday — with states pleading for the federal government to give them more hospital beds, masks and ventilators — while health officials predicted the outbreak might peak in mid-April. 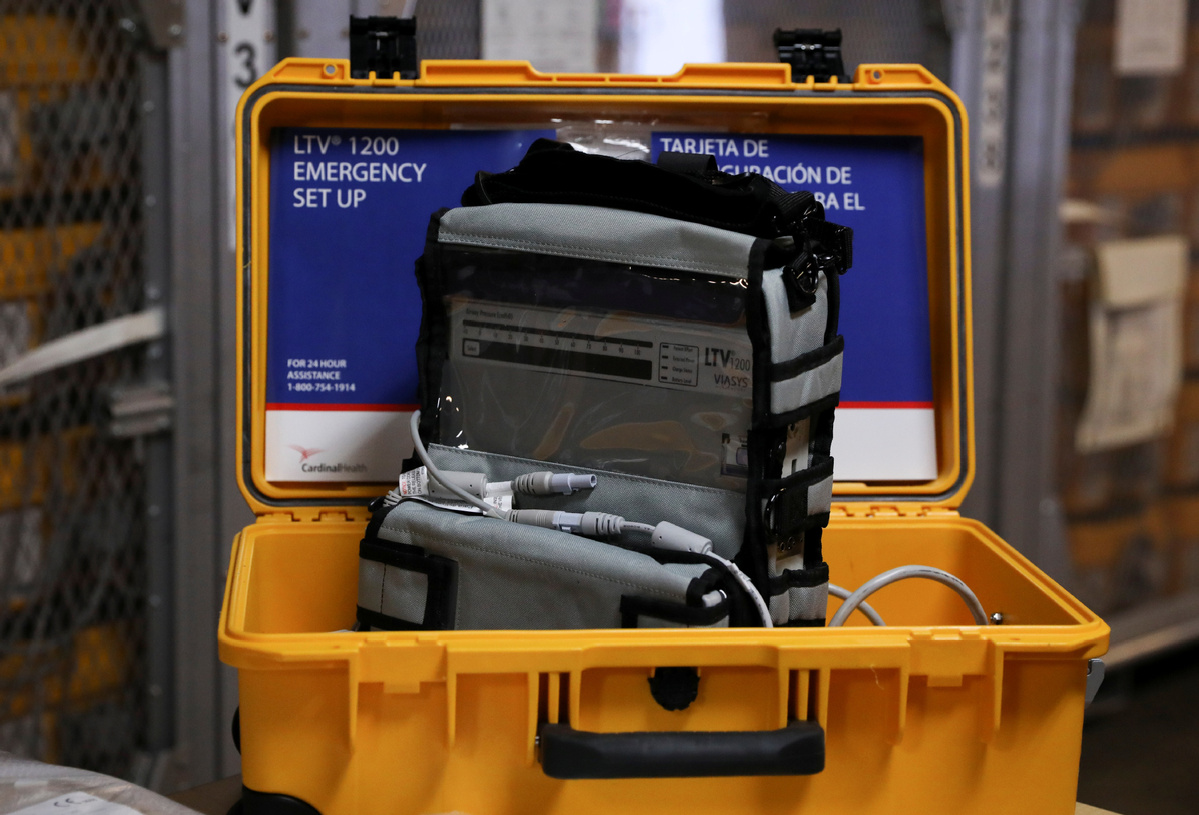 A ventilator is seen at the New York City Emergency Management Warehouse, where 400 ventilators arrived and before being shipped out for distribution, due to concerns over the rapid spread of coronavirus disease (COVID-19) in the Brooklyn borough of New York City, US, March 24, 2020. (Photo: Agencies)

In an attempt to meet a nationwide outcry by state governors for more ventilators, the White House announced Thursday evening that President Donald Trump is invoking the Korean War-era Defense Production Act to clear up supply-chain issues encountered in the manufacturing of ventilators.

"Today, I have issued an order under the Defense Production Act to more fully ensure that domestic manufacturers can produce ventilators needed to save American lives," Trump said in a statement.

The order will help domestic manufacturers "secure the supplies they need to build ventilators needed to defeat the virus", the statement said.

It comes as the nation's stockpile has only 9,500 ventilators and only an additional 3,200 scheduled to arrive by April 13, the Federal Emergency Management Agency (FEMA) told a House committee this week.

The Trump administration also is expected to announce soon a shift in federal guidelines on personal protection against the coronavirus: that all Americans should wear cloth masks or other face coverings if they go out in public.

The New York Times reported Thursday that the change is based on a forthcoming recommendation from the Centers for Disease Control and Prevention (CDC).

The CDC, like the World Health Organization (WHO), has until now advised that most people do not need to wear masks unless they are actually sick or coughing. That was also to preserve the supply of medical-grade N95 masks for healthcare workers and first responders.

But the new guidance comes amid concerns that the coronavirus is being spread by people who have no symptoms.

New York City Mayor Bill de Blasio told New Yorkers on Thursday to cover their faces when they go outside, even if they use a homemade mask.

"It can be a scarf, it can be something you create at home, it can be a bandana," de Blasio said at a news conference Thursday.

De Blasio cautioned residents against wearing surgical masks or other medical-grade masks, worrying that it could worsen the shortage of personal protective equipment in hospitals.

During a news conference Wednesday night, Los Angeles Mayor Eric Garcetti called on the city's 4 million residents to wear "home-made" nonmedical masks when they go out in public or interact with others. Like de Blasio, he also urged people not to get surgical or N95 masks because they are needed by medical personnel.

On the need for ventilators, New York Governor Andrew Cuomo said Thursday, "If a person comes in and needs a ventilator and you don't have a ventilator, the person dies. That's the blunt equation here. And right now we have a burn rate that would suggest we have about six days in the stockpile."

Cuomo made an offer to businesses. He said that the state would pay to help manufacturers switch over to produce hospital gowns, gloves and other equipment. "If you have the capacity to make these products, we will purchase them, and we will pay a premium," he said. "But we need it, like, now."

Trump earlier defended his administration's efforts to send ventilators and protective equipment to New York, saying that "other states are thrilled with the job we have done" and insisted that "the complainers should have been stocked up and ready long before this crisis hit".

Governors have been pleading with the Trump administration for help, and many have continually said that they are not receiving nearly enough supplies from the federal stockpile to address the surge in hospitalizations.

On pleas for more protective gear, Trump insisted that the administration is giving medical supplies to states nationwide.

He tweeted that some states had shown an "insatiable appetite" for equipment they don't necessarily need, singling out "complainers" who will never be satisfied. "Some have insatiable appetites & are never satisfied (politics?)" Trump tweeted. "Remember, we are a backup for them."

US hospitals are projected to fall short by thousands of beds in the expected surge of coronavirus patients. Nationwide hospitalizations could peak April 15, when patients may need around 88,000 more beds than are currently available, according to the latest estimates from the University of Washington.

The US death toll was 5,316 as of Thursday, according to Johns Hopkins University data. Worldwide, it surpassed 50,000, and the virus has infected close to 1 million, according to the WHO.

In New York, the hardest-hit state in the country, Cuomo announced 423 new deaths from the novel coronavirus Thursday, bringing the state's total to 2,373, with more than half in New York City.

There were 8,669 new confirmed cases statewide, for a caseload of 92,381, with infections in every county.