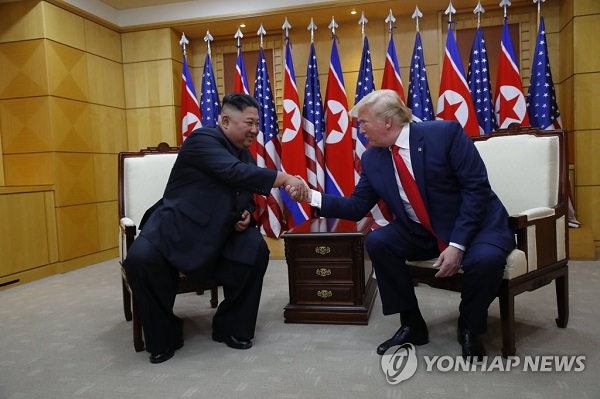 Trump and Kim made the historic handshake, standing on the two sides of the inter-Korean military demarcation line (MDL), marked only by a low concrete slab.

Together with Kim, Trump crossed the MDL into the DPRK side of Panmunjom, becoming the first sitting US leader to step foot on the DPRK territory.

On the DPRK side, the leaders of the DPRK and the United States shook hands again and took a photo opportunity before crossing the MDL back into the South Korean side.

Kim praised Trump for his extraordinary determination to pioneer a good future and liquidate a bad past, describing Trump as the first US president to step into the DPRK territory.

Trump and Kim sat before reporters inside a building in the South Korean side of Panmunjom, with US and DPRK national flags standing on the background.

Calling the Panmunjom meeting a "historic moment," Trump said he had developed a great relationship with Kim.

The US president said it was a "great honor" for him to step over the MDL into the DPRK territory, expressing his thanks to the DPRK leader for accepting his invitation.

Trump invited Kim to meet in the DMZ through his Twitter message Saturday, saying at a press conference in Japan that he would feel comfortable crossing the inter-Korean border into the DPRK territory if Kim showed up.

After attending the Group of 20 (G20) summit, Trump arrived in South Korea Saturday night and held talks with the South Korean president earlier on Sunday.

It marked the first time in history that the leaders of South Korea, the DPRK and the United States met in the inter-Korean border village.

The Korean Peninsula has been left divided since the 1950-53 Korean War ended with armistice.