WORLD Trump lashes out ahead of vote to end shutdown

Trump lashes out ahead of vote to end shutdown 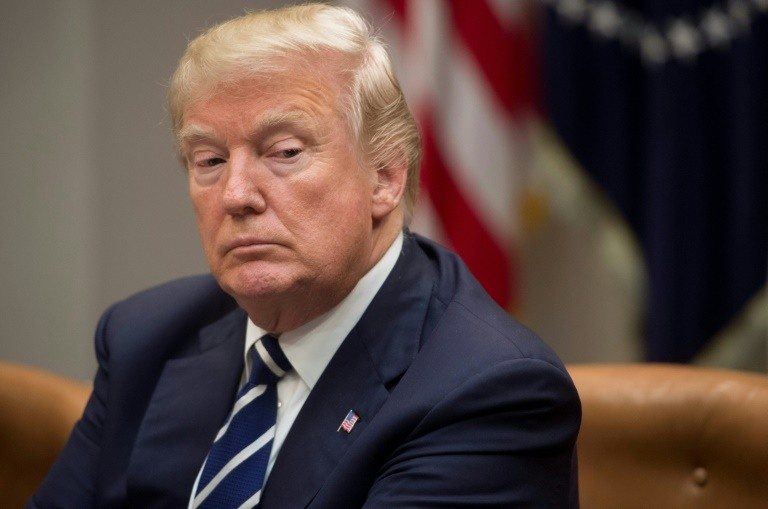 President Donald Trump launched a fresh attack on his opponents ahead of a new effort in the bitterly divided US Congress to end a budget impasse before hundreds of thousands of federal workers are forced to start the workweek at home without pay.

The impact of the shutdown that began at midnight Friday has been largely limited so far, closing sites like New York's Statue of Liberty, but the effect will start to become acute if the stalemate runs into Monday.

Republicans and Democrats have traded bitter recriminations over who is to blame for the failure to pass a stop-gap funding measure by a January 20 deadline, a year to the day since Donald Trump took office as US president.

"Great to see how hard Republicans are fighting for our Military and Safety at the Border. The Dems just want illegal immigrants to pour into our nation unchecked," Trump wrote on Twitter.

He also encouraged the Senate's Republican leaders to invoke a procedural maneuver known as the "nuclear option" to change the chamber's rules to allow passage of a budget by a simple majority of 51 votes to end the shutdown. Senate leaders have been wary of such a move in the past, as it could come back to haunt them the next time the other party holds a majority.

"If stalemate continues, Republicans should go to 51% (Nuclear Option) and vote on real, long term budget, no C.R.'s!" he tweeted.

White House budget director Mick Mulvaney accused some Democrats of wanting to "deny the president sort of the victory lap of the anniversary of his inauguration" -- echoing a complaint Trump made on Twitter the day before.

"There's other Democrats who want to see the president give the State of the Union during a shutdown," Mulvaney said on Fox, referring to the nationally televised address Trump is to deliver on January 30.

However, White House legislative director Marc Short told ABC that progress is being made, and Mulvaney also said there is a chance to have the government open before the workweek begins on Monday morning.

Late Saturday, top Senate Republican Mitch McConnell set a key vote for a funding measure for 1:00 am (0600 GMT) Monday, with both houses of Congress set to reconvene Sunday.

"I assure you we will have the vote at 1:00 am on Monday, unless there is a desire to have it sooner," he said in a statement.

At the heart of the dispute is the thorny issue of undocumented immigration.

Democrats have accused Republicans of poisoning chances of a deal and pandering to Trump's populist base by refusing to fund a program that protects an estimated 700,000 "Dreamers" -- undocumented immigrants who arrived as children -- from deportation.

Trump, in return, has said Democrats are "far more concerned with Illegal Immigrants than they are with our great Military or Safety at our dangerous Southern Border."

The shutdown's effects meanwhile are set to intensify.

There have been four government shutdowns since 1990. In the last one, in 2013, more than 800,000 government workers were put on temporary leave.

"We're just in a holding pattern. We just have to wait and see. It's scary," Noelle Joll, a 50-year-old furloughed US government employee, told AFP in Washington.

A deal had appeared likely on Friday afternoon, when Trump -- who has touted himself as a master negotiator -- seemed to be close to an agreement with Democratic Senate leader Chuck Schumer on protecting Dreamers.

But no such compromise was in the language that reached Congress for a stop-gap motion to keep the government open for four more weeks while a final arrangement is discussed. And Republicans failed to win enough Democratic support in the Senate to bring it to a vote.

Congress reconvened for a rare Saturday session, where leaders of both sides were meant to hammer out their differences to prevent the shutdown from stretching into Monday. Instead, they traded accusations of responsibility for the shutdown.

Republicans have a tenuous one-seat majority in the Senate, and on Friday needed to lure some Democrats to their side to get a 60-vote supermajority to bring the motion forward. They fell 10 votes short.

The measure brought to Congress would have extended federal funding until February 16 and reauthorized for six years a health insurance program for poor children -- a long-time Democratic objective.

But it left out any action on the Deferred Action on Childhood Arrivals program, known as DACA, that affects Dreamers.

White House officials insisted there was no urgency to fix DACA, which expires March 5.

Highlighting the deep political polarization, crowds estimated to number in the hundreds of thousands took to the streets of major US cities including Los Angeles, New York and Washington over the weekend to march against the president and his policies and express support for women's rights.

Protesters hoisted placards with messages including "Fight like a girl," "A woman's place is in the White House" and "Elect a clown, expect a circus."