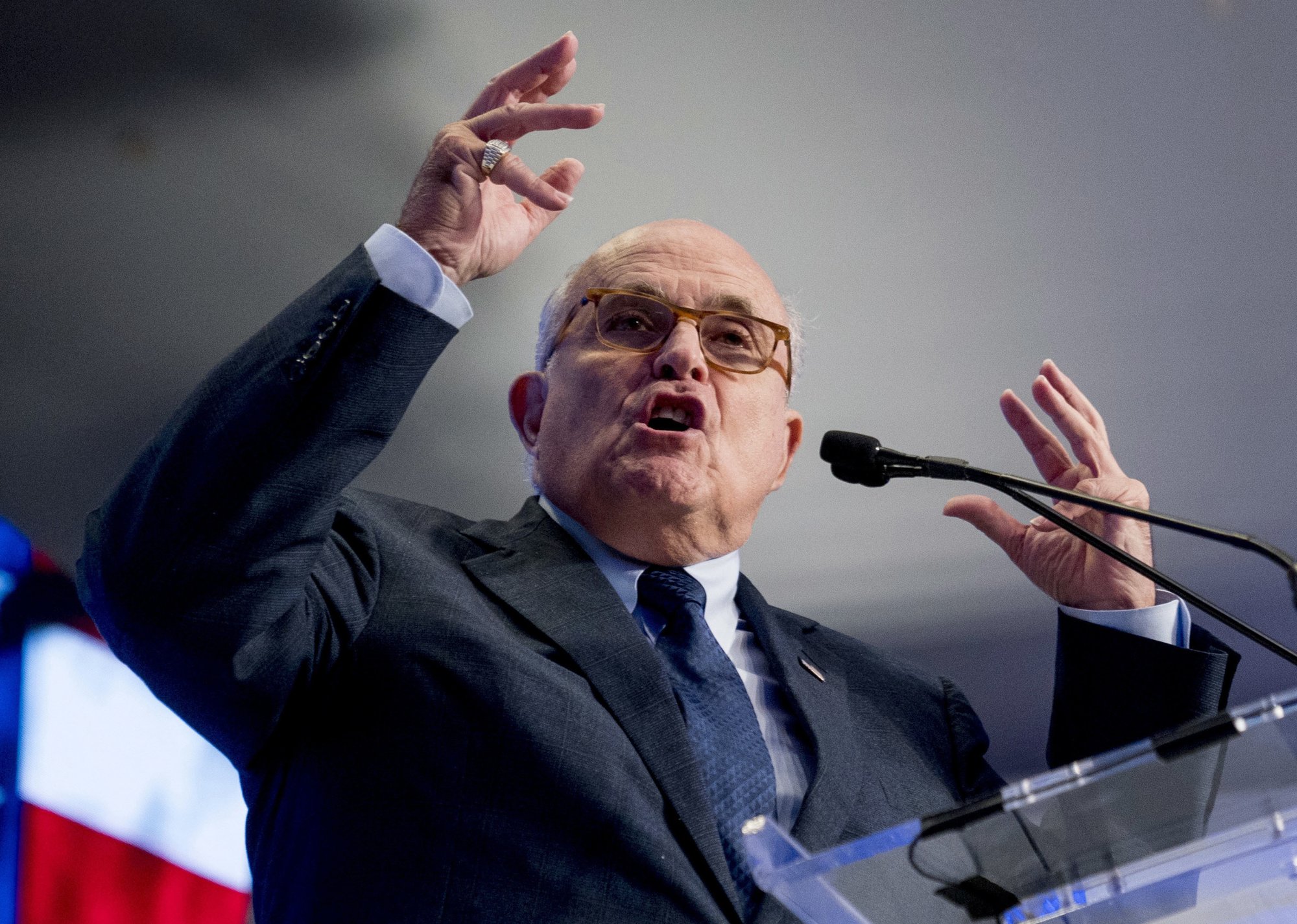 Democrats denounced a plan by President Donald Trump’s personal attorney to push Ukraine to open investigations that he hopes could benefit Trump politically, saying it was an overt attempt to recruit foreign help to influence a US election.

But lawyer Rudy Giuliani has scrapped plans to visit Ukraine, citing concerns about who he would be dealing with there.

Giuliani’s plan had seemed poised to create an unprecedented moment — a lawyer for the American president seeking foreign assistance in trying to damage political rivals. To Democrats, it was a blatant evocation of Russia’s meddling on behalf of Trump when he defeated Democrat Hillary Clinton in 2016

“The meeting would have accomplished little and may be in the hands of those who might misrepresent it,” Giuliani said Saturday in a statement.

Giuliani had said earlier that he would to travel to Kiev in coming days to urge the government to investigate the origins of special counsel Robert Mueller’s recently concluded probe into Russian interference in the 2016 US election, and the involvement of former Vice President Joe Biden’s son in a gas company owned by a Ukrainian oligarch.

Joe Biden is the early Democratic front-runner to challenge Trump in the 2020 election. The Biden campaign has denied that Biden or his son, Hunter, did anything improper.

Giuliani said he has concluded that Ukraine’s president-elect is being advised by people who were the “very vocal opponents of President Trump and peculiarly vocal supporters of Hillary Clinton.”

TV star and comedian Volodymyr Zelenskiy beat incumbent President Petro Poroshenko in a recent presidential election. Giuliani said he believes that the incoming president is being advised, in particular, by Serhiy Leshchenko, an opposition parliament member who helped uncover the off-the-books payments made to Trump campaign chairman Paul Manafort.

“My purpose was to share information to assist their on-going investigation of Ukrainian officials being used by Americans to gather information to assist Clinton in last election and to alert them to the very real dangers that there are people involved in the investigation ... who are attempting to shut it down before it reaches a conclusion,” Giuliani said in a statement.

He said the Ukrainian investigation has the potential to reveal people who originated or propagated “the false claim of collusion” between Russia and the Trump campaign.

Writing in the Ukrainska Pravda online newspaper, Leshchenko said Lutsenko “came up with the story” that the former vice president had pressured Ukraine to close the case involving the gas company, while it was Lutsenko himself who had closed the case more than two years ago. He re-opened the case this spring in the midst of Ukraine’s presidential campaign in what was seen as an effort to win Trump administration support for Poroshenko.

Democrats took aim at Giuliani for planning the trip at all.

“It’s stunning that the Trump administration is going down the same tragic path they did in 2016 seeking help from a foreign government again to influence an American presidential election. It’s appalling,” said Rep. Adam Schiff of California, chairman of the House Intelligence Committee. He said Trump allies were indicating, “We’re going to do everything short of what’s downright criminal. Ethics don’t matter. Patriotism doesn’t matter.”

Giuliani, a former New York City mayor who often acted as a smokescreen for Trump during the Mueller probe, pushed back against the criticism.

“Explain to me why Biden shouldn’t be investigated if his son got millions from a Russian loving crooked Ukrainian oligarch while He was VP and point man for Ukraine,” Giuliani tweeted at Sen. Chris Murphy, D-Conn., who criticized him. “Ukrainians are investigating and your fellow Dems are interfering. Election is 17 months away. Let’s answer it now.”

Giuliani’s planned trip, first reported by The New York Times, would have been the most high-profile effort yet by Republicans to call attention to growing talking points in conservative circles. They are trying to undermine the special counsel’s investigation, call into question the case against Manafort, Trump’s imprisoned former campaign chairman, and wound Joe Biden.

Trump and Giuliani have urged scrutiny of Hunter Biden and have questions about whether Joe Biden helped oust a Ukrainian prosecutor whose office was first investigating the oligarch behind the company that paid Hunter Biden. Some Trump allies have suggested they can tarnish Joe Biden with questions about corruption, founded or not, much like they did to Clinton in 2016.

Giuliani has said he updated the president about his findings on Ukraine, a nation deeply reliant on the Trump administration for US military and financial aid.

“I’m hearing it’s a major scandal, major problem,” Trump said on Fox News recently. “I hope for (Biden) it is fake news. I don’t think it is.”

The president has also tried to push claims that Ukrainian officials tried to help Clinton by focusing attention on Manafort’s business in Ukraine. That attention forced Manafort to resign from the campaign, and he was later convicted of financial crimes and sentenced to prison. Ukrainian officials have denied involvement, but Trump has latched onto the idea that Kiev “colluded” with Democrats and that the origins of Mueller’s probe were fraudulent.

Trump’s re-election campaign distanced itself from Giuliani’s efforts, saying it had nothing to do with the lawyer’s inquiry.