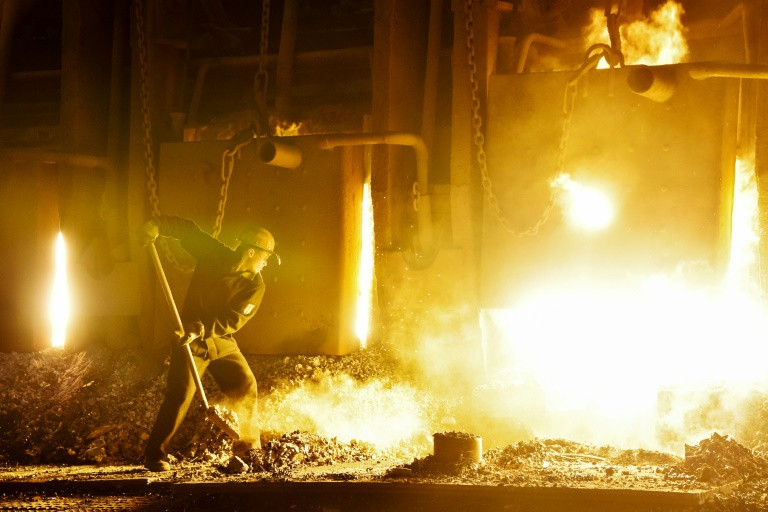 Aluminum and steel, such as that pictured below being produced in Russia, are at the center of a global controversy over US threats to impose tariffs on imports

US President Donald Trump said Monday he would only scrap planned tariffs on aluminum and steel if a "new & fair" deal to revamp the North American Free Trade Agreement is reached.

In a series of tweets, Trump linked the tariffs -- which sparked a fierce global response last week following their surprise announcement -- to issues with NAFTA partners Canada and Mexico.

"Tariffs on Steel and Aluminum will only come off if new & fair NAFTA agreement is signed," he said, lamenting the "large trade deficits" with Mexico and Canada.

The comments came as US, Mexican and Canadian trade officials were in Mexico City for the final day of the seventh round of talks aimed at modernizing and modifying the trade pact, talks that already had hit serious roadblocks over US demands.

Trump raised the stakes by holding the NAFTA talks hostage to the new tariffs -- 25 percent on steel and 10 percent on aluminum -- as he repeated his claim that NAFTA was a "bad deal" that has taken jobs and companies out of the US.

Trump administration officials frequently refer to the deficit in goods alone, excluding the offset from dominant US services exports of things like banking and insurance.

Trump ignited fears of a trade war and an outcry from major trading partners this week when he abruptly announced that he would impose blanket tariffs on imported steel and aluminum this week.

He followed that with an even broader threat: reciprocal tariffs on all imports from countries that impose duties on US exports.

US trading partners already are preparing to retaliate, and have pledged to file a dispute in the World Trade Organization. 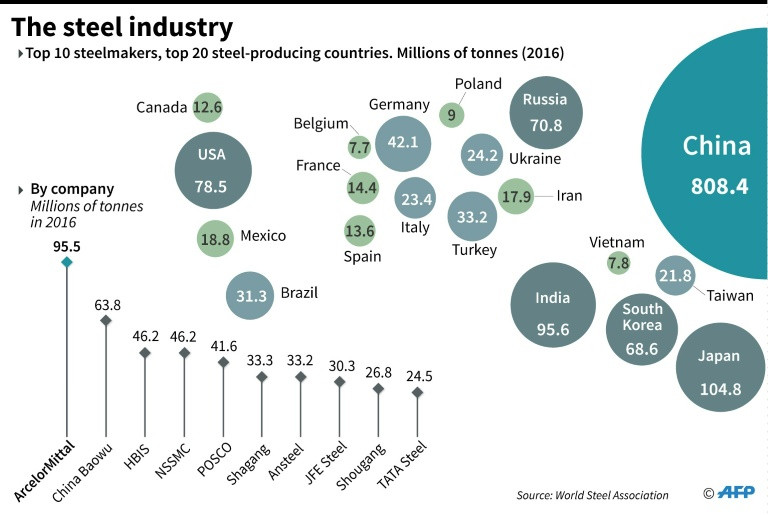 He said the response should be "within the framework of the WTO and in a balanced manner," adding that it was "clear that these (tariffs) would go against WTO rules."

Germany warned against protectionist measures, which it decried as "the wrong path."

"Such measures would inflict pain on international trade flows and our industry, but above all hurt workers and consumers on both sides of the Atlantic," German Chancellor Angela Merkel's spokesman Steffen Seibert said Monday.

Canada, which has the most to lose as the top source of US steel and aluminum to the US market, has called the tariffs "unacceptable."

British Prime Minister Theresa May raised her "deep concern" about the tariffs in a phone call with Trump on Sunday, her office said.

The European Union has said it is drawing up measures against leading US brands like Harley-Davidson and Levi's jeans.

But Trump over the weekend tweeted that the US could respond by blocking imports of European-made cars, just the kind of tit-for-tat reaction that economist warn could spark a trade war at a time when the US and global economies have only recently returned to firmer footing.

The steel and aluminum tariffs were recommended by Commerce Secretary Wilbur Ross after a report from his agency concluded that the glut of the metals on global markets was a threat to US national security.

The irony is that while Trump has repeatedly tried to target China and its trade policies, the steel tariffs would hit US allies the hardest, in particular Canada.

Ross in a television appearance on Sunday repeated that Trump is unlikely grant any exemptions, preferring to use a "broad brush." But he also raised the possibility the president could change his mind.

Meanwhile, Trump said Mexico must "do much more" to stem the flow of illegal drugs into the US.

"They have not done what needs to be done," he said. "Millions of people addicted and dying."

However, much of the opioids that have flooded into American households is in the form of prescription drugs manufactured by US pharmaceutical companies.

Mexico's Foreign Minister Luis Videgaray Caso responded to Trump in a tweet of his own, saying clamping down on drugs requires cooperation on both sides of the border.

"Dealing with drug trafficking is a shared responsibility between Mexico and the US," he said.

"Only working together and addressing supply and demand we can stop the ilegal (sic) flow of drugs, cash and weapons going both ways."