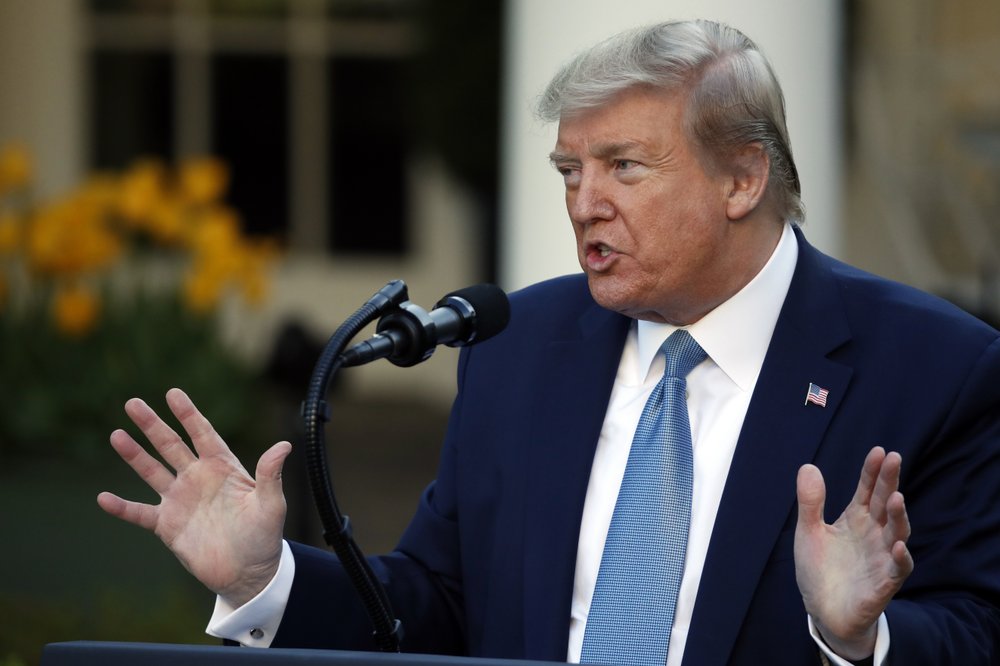 US President Donald Trump speaks about the coronavirus in the Rose Garden of the White House, Wednesday, April 15, 2020, in Washington. (AP Photo/Alex Brandon)

US President Donald Trump said Wednesday he’s prepared to announce new guidelines allowing some states to quickly ease up on social distancing even as business leaders told him they need more coronavirus testing and personal protective equipment before people can safely go back to work.

The industry executives cautioned Trump that the return to normalcy will be anything but swift.

The new guidelines, expected to be announced Thursday, are aimed at clearing the way for an easing of restrictions in areas with low transmission of the coronavirus, while keeping them in place in harder-hit places. The ultimate decisions will remain with governors.

“We’ll be opening some states much sooner than others,” Trump said.

But in a round of calls with business leaders Wednesday, Trump was warned that a dramatic increasing in testing and wider availability of protective equipment will be necessary for the safe restoration of their operations.

The new guidelines come as the federal government envisions a gradual recovery from the virus, in which disruptive mitigation measures may be needed in some places at least until a vaccine is available — a milestone unlikely to be reached until sometime next year.

Trump said at his daily briefing that data indicates the U.S. is “past the peak” of the COVID-19 epidemic, clearing the way for his plans to roll out guidelines to begin to “reopen” the country.

He called the latest data “encouraging,” saying the numbers have “put us in a very strong position to finalize guidelines for states on reopening the country.”

Dr. Deborah Birx, the White House coronavirus task force coordinator, added that data from across the country showed the nation “improving,” but that Americans had to recommit to social distancing to keep up the positive momentum.

She said nine states have fewer than 1,000 cases and just a few dozen new cases per day. She said those would likely be the first to see a lifting in social distancing restrictions at the direction of their governors under the guidelines set to be released Thursday.

Birx said the White House was particularly concerned about Rhode Island, noting it is now seeing a surge in cases from the Boston metro area after seeing a spike several weeks ago from cases from New York.

He received a mixed message from the industry leaders. They, too, said they want to get the economy going but had worries about how to safely do so.

In a tweet midway through Trump’s round of conference calls with the executives, the president said the participants were “all-in on getting America back to work, and soon.”

But participants in a morning call that included dozens of leading American companies raised concerns about the testing issue, according to one participant who spoke on condition of anonymity to describe the private discussion.

Another person who participated in Wednesday’s calls said it was stressed to Trump that expansion of testing and contact tracing was crucial, as well as guidelines for best practices on reopening businesses in phases or in one fell swoop.

The participant said those on the call noted to the administration that there was about to be a massive rush on personal protective equipment. Many businesses that are now shuttered will need the protective equipment to keep their employees and customers safe.

Mark Cuban, the billionaire entrepreneur and owner of the Dallas Mavericks, was among several representatives from major sports leagues to speak with Trump. During a Fox News interview ahead of the calls, he credited the president with gathering some of the “best of the best” to help shape his approach on reopening the economy. Still, Cuban did not embrace Trump’s push to reopen parts of the economy May 1.

“This is such a moving target that I think the biggest mistake we can make is rush to a decision,” said Cuban, who previously had been critical of Trump’s response to the pandemic. “But I’m going to help him in every way I can, whatever he needs me to do.”

The panel, which Trump dubbed the new Great American Economic Revival Industry Groups, also could help give Trump a measure of cover. If cases surge once restrictions are lifted, as many experts have warned, Trump will be able to tell the public he didn’t act alone and the nation’s top minds — from manufacturing to defense to technology — helped shape the plan.

Rich Nolan, president and CEO of the National Mining Association, who participated in one of the calls with Trump, said there was also discussion about tax relief as well as “making sure that people are optimistic about the economy and they feel safe coming back to work.”

“I think you’ll see steps to reopen the country at different rates in different states in the not too distant future,” Nolan said.

The launch of the council was not without hiccups.

AFL-CIO President Richard Trumka didn’t know until he heard his name announced in the Rose Garden on Tuesday that he would be part of the advisory group, according to Carolyn Bobb, a spokeswoman for the union.

“We were not asked,” Bobb said in an email. It was “just announced.”

Maryland Gov. Larry Hogan said Trump has appointed some “smart people” to his task force who could offer state leaders helpful guidelines as they negotiate the way forward.

“There are certain roles that only the federal government can play and should play, but I think the governors are going to make their own decisions within those recommended guidelines,” Hogan said.